Lance Armstrong’s first autobiography is called It’s Not About the Bike. While Lance turned out to be an outrageous liar, the part about cycling not just being about the bike is true.

Lance’s winning streak turned out to be about his extreme competitive nature, singlemindeness and willingness to try anything, including dangerous, illegal drugging and losing his career, to beat other racers.His determination was so great that he lied barefaced about his actions for years, continually denying what he’d done until the evidence piled up so high that he was forced to come clean.

His determination was so great that he lied barefaced about his actions for years, continually denying what he’d done until the evidence piled up so high that he was forced to come clean.

For those of us who struggle to get out of bed for an early morning workout, it’s hard to imagine being that competitive.

I won’t be undergoing blood transfusions or meddling with illegal, performance-enhancing drugs but, after six months of cycling, I now have a better understanding about why it’s not about the bike.

So what is cycling about? Here are a few things I’ve learned from cycling 1,972 kilometers (1,225 miles) ) over the last six months.

1. Fitness and strength are everything

Even if I had a $5,000 Stradalli Black carbon time trial bike (that’s the dream), I still wouldn’t be able to go any faster than I can now. I’m getting faster, but fitness and strength take time to build. There aren’t any shortcuts. You have to train often and regularly to get faster. Even when it’s cold or dark you still have to go cycling.

My regular long Sunday rides with a group of mainly retired gentlemen usually heads for the hills. The surrounding countryside around Noosa which we call the Hinterland has always been beautiful, but I appreciate it more when I cycle there.

I love cycling through Eumundi at 7 am on a Sunday when there’s no one around. It’s quaint and charming at that time, unlike on a Wednesday or Saturday, the Eumundi Market days when I find it horribly over-crowded.

We see kangaroos and hares on our bike rides that cars speed by without noticing. We pass houses and scenery that I’ve passed a hundred times before and notice details that never struck me before.

I cycled 100km once and it hurts. Not just your bum and thighs as you’d expect. My shoulders and lady parts get very sore too. Ouch! It’s not pleasant.

5. Mental strength grows with practice too

There have been times when I wanted to get off my bike, lie down on the roadside and cry. But I didn’t, partly because I would never have been able to face my lovely biking group again, but also because there was only one way for me to get home – by cycling.

So each time mental weakness and a limited mindset threatened to make me vow to never bike again, I was forced to get over it, and carry on biking.

As my legs got stronger, so did my mental strength and attitude.

I’ve been fortunate not to have had any serious accidents while biking or to have broken any bones. But I have fallen off several times because I didn’t manage to unclip my bike shoes from the pedals in time.If you haven’t experienced that feeling of coming to a standstill on a bike and being unable to put a foot the ground it’s best avoided.

If you haven’t experienced that feeling of coming to a standstill on a bike and being unable to put a foot the ground because it’s clipped onto the pedals, it’s best avoided.

Falling off a bike at standstill happens in slow motion. You end up lying on the roadside looking and feeling very foolish with bloody knees.

Normally I think of food as an enjoyable part of being human or a much-needed treat. Cycling for three hours or more has given me a healthier outlook on food as essential fuel to help us get stuff done.

Not understanding how much our body needs fuel has probably contributed to some miserable endings to some of my bike rides. Now I aim to consume about 100 calories every half an hour which is about half what I burn from road biking in a group.

8. Life’s full of ups and downs

Sometimes hills seem to go on forever. My legs burn, the other riders disappears round a corner and the voices in my head, whispering ‘you’re not good enough’, get louder and louder.

But then, inevitably I crest the hill and start to freewheel down it. Finally, my legs can cease their pedaling and the negative thoughts are blown away by the childish pleasure of whizzing down a hill on a bike. It’s an unbeatable feeling.

9. You can count on caffeine

While training for a half marathon (and running the Luang Prabang half marathon) I discovered the incredible benefits of caffeine. Being a non-coffee drinker, who knocks back only caffeine-free herbal teas, I’ve finally discovered why people love their coffee and caffeine hit.

Not only does caffeine help you run or bike faster, it also gives you a mental edge. After I’ve knocked back 20-40mg of caffeine (in tablet form or via energy gels), my mind focuses on the task at hand. Negative thoughts disappear and all I think about is moving my legs as fast as I can for as long as I can.

Caffeine gives me a little bit of Lance’s single-minded determination. 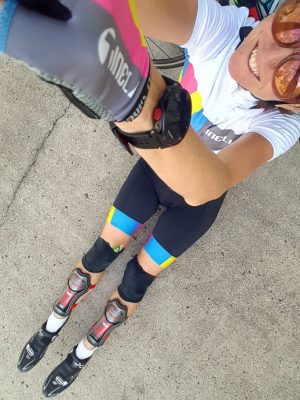 I scoffed at cyclists in the past, as they hobbled into cafes in their clunky shoes, and logo-smattered lycra outfits. Now I’m one of them and I’m proud of that because they’re a pretty cool crowd.

I’ve biked with several different biking groups and, although I’m always the weakest link, they continue to welcome me, encourage me, and wait for me when I can’t keep up.

One 80-year-old rider has even been known to literally try to push me up a hill by putting a hand on my back as we cycle along. Thanks, Jim!

With my seventies disco rainbow arm warmers, streaming nose, and desperate concentration as I try to keep up, I must look a sight.Once, after falling off the bike in my new clip on shoes I even biked wearing my daughter’s shin pads and some knee pads I made out of socks with the toes cut off stuffed with cereal boxes. That’s just plain silly and the cardboard got all soggy.

Once, after falling off the bike in my new clip on shoes I even cycled wearing my daughter’s shin pads and knee pads made out of socks with the toes cut off stuffed with cereal boxes. That’s just plain silly (see photo!) and the cardboard got all soggy.

Yet, despite my quirks, and status as a rank amateur, my fellow cyclists have fixed my punctures, given me their energy gels and embraced me as one of them.

I’ve learned that, much as I love my Scott road bike, cycling is about much more than the bike. It’s about camaraderie, tenacity and scenic routes. Most of all, it’s about the childish joy you feel whizzing down a hill with the wind in your face.

I’m still training away at running and swimming as well as biking. The Noosa Triathlon is on November 6th so it’s getting close. I’ll be back with a progress report on that soon.

Did you enjoy this story?

Get free email updates to follow my adventures and get inspired for your own. Subscribe now for free! You’ll get a weekly email with links to the lastest update and you can easily subscribe anytime.

Why subscribe? Get In the Hot Spot is a weekly injection of tips to help you be more adventurous, stay fit and have more fun. Sounds good? Click here now for weekly email updates.