While thousands visit Europe for the historical, architectural and cultural experiences, many more just want to get wasted and party, with the focus firmly on cultural exchanges of a romantic nature. And, if you’re young, optimistic and unburdened by children, jobs and mortgages, why not?

Although I’d traveled independently before, I didn’t experience the backpacker travel scene until the late eighties. That summer I went traveling round Greece and Turkey with Karen.

She was a student in London too and, although a less experienced and more cautious traveler than me, Karen gamely agreed to many of my suggestions.

While I had the upper hand when it came to travel experience, Karen was a seasoned party animal and man magnet who made me look like Anne of Green Gables.

In London we dragged ourselves to lectures by day and by night we worked together in an East End pub, scrimping and saving to earn enough money for our forthcoming adventure.

There Karen picked up a dazzling array of dishy but dodgy young men, while I kept my head down pulling pints and trying to avoid the aging beer-bellied Eastenders who ribbed me mercilessly for being stuck up before inviting me out. Each time I refused their hounding intensified, a price I was quite willing to pay for a carefree summer backpacking trip.

To save money and avoid running out of cash later on Karen and I decided to free camp on the beach at the start of our trip.

There is nothing I enjoy more than planning my travels – I pore over the guide books for months before setting foot on the plane trying to work out which places I absolutely have to see, and which ones will have to wait for another trip. This time was no different and I finally picked a little-known Greek island where we could get a nice tan before heading to the party islands.

Karen was more into sunbathing and partying but I was determined to get off the beaten track, visit the ancient ruins and have a proper cultural experience, so this way we were both happy.

Unfortunately, my guide book failed to mention that the island of Chios was a military base inhabited mainly by several hundred bored, sex-starved Greek soldiers.

The long-suffering Karen was not impressed, but we slept on the beach anyway, washing in a nearby restaurant and kidding ourselves the staff didn’t notice when we slipped off to wash our hair in the basin after ordering a Greek salad.

Chios was a charming spot. The stunning beaches and lack of tourists filled my desire to discover undiscovered Greece but unfortunately we were too naive to give false names to the lusty Greek army boys.

At night the air would reverberate with calls of “Karen” and “Annabel” as the Greek soldiers hunted us down.

We huddled between the sand dunes giggling softly so they wouldn’t hear us with our sleeping bags pulled up to our chins. But they were a persistent bunch and we had to leave after four nights because we couldn’t stand the relentless male attention any more.

A few long ferry rides later, Ios lived up to its reputation as party central.

We soon met two fun-loving  Australian girls and hung around in a foursome bar hopping until the small hours. We always seemed to lose one another as the night wore on and invariably I was the only one who actually slept in our room at night. But come noon we’d be miraculously reunited, tucked up safely in our beds, trying to piece together what had happened the night before.

Our exploits were tame compared to some of the other travelers. I remember chatting to one man outside a bar who was swigging rough Greek spirits straight from the bottle. He offered me a swig (which I politely refused), then vomited over his shoulder before turning back, wiping his mouth with his sleeve and carrying on the conversation.

I didn’t hear of anyone taking drugs but there were all kinds of strange rumors about people being slipped hallucinogenic drugs on Ios. Still, we were fine and left the island after 10 days of hedonism simply because we were on the brink of exhaustion.

Endless days and nights of tequila slammers, dancing on bars and inane conversation take its toll no matter how young you are. Compared to many travelers I didn’t drink much but I still reckon about 25% of my brain cells were left behind on that Greek party island. Karen and the Aussie girls seemed to be able to drink more and cope with it better but even they were worn out. 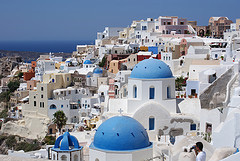 Santorini whose scenic slopes adorn adverts for Greece, was nearby and sounded ideal for some much needed rest and recovery. But as we boarded the ferry I fell over and lay on my back cycling my legs in the air like an upended tortoise, pinned by the weight of my backpack. It took all three of my friends to help me back on my feet.

In Santorini we hired lumbering donkeys to carry us up the steep track to town. Santorini is all white buildings, blue skies and fishy air and that night Karen and I went to bed early looking forward to our first decent sleep for weeks.

When I woke in the night to find a strange man sitting on the chair by my bed I was terrified. And, worse still, unable to move or even utter a sound. The man didn’t actually do anything other than watch me but I frantically tried to move or scream out for hours.

Time dragged by. My throat constricted and ached. I tried frantically to move and eventually, with super human effort, I finally managed to move a foot and at last open my mouth to scream before running out of the room yelling at full volume:

I was naked and didn’t have much trouble getting the attention of a group of French men at the restaurant next door.

The gallant Gauls grabbed a stick, jumped over the small wall separating us and raced into my room where Karen was sitting up in bed silently. The men soon came out again shrugging their shoulders and saying:

“There eeees no man inside.”

She handed me a sheet and spoke slowly as if to a child:

That’s when I burst into tears wailing:

Our French heroes made their excuses and fled but after that we kept bumping into them again wherever we went.

Then it was my turn to flee as they sniggered and pointed at the crazy English girl.

Never mind the real dangers of traveling my mother warned me about, it seemed like the biggest threat was inside my head.

I bet they still remember their old friend Tripper.

I’m still not sure what really happened to me but I now doubt anyone slipped hallucinogenic drugs into one of my  drinks.

According to the Dream Doctor sleep paralysis seems to be more likely. I particularly like his explanation because he claims that, while these dreams may make you feel like you’re going crazy, it doesn’t mean you actually are crazy. Very comforting.

This is his definition of sleep paralysis:

“Sleep paralysis occurs when we wake up mentally—only to discover that our bodies still are “asleep”—and we can’t move!

To make matters even more confusing, our awakening from REM sleep typically is only partial. This means we tend to have long and confusing dreams about being paralyzed, and, because we feel vulnerable, we often dream of being attacked.”

What’s  your most embarrassing story or most memorable travel story? Please share it in the comments below or write your own blog post – we want to read it!

Naked Travel Stories Will be Continued…

Later, in an inspired move, Karen and I shred our plane tickets and hitchhike to the Oktober Fest in Germany. And despite all precautions we do run out of money.

Thank you for reading – stay tuned by email or RSS.