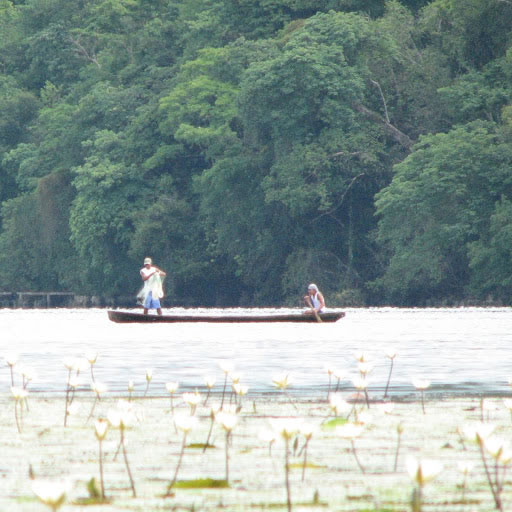 My article, Live Your Dream in a Material World, struck a chord with many of you. In it, I described how we sold most of our belongings in order to make our dream come true and move to Central America.

Now I want to share the first page of my book about our experiences. It tells how we followed our hearts, ignored other people, took a risk, and put up with hardships to follow our dream. I hope that our story will inspire other people to be brave and follow their dream. Here are the first 900 words:

Our First Day in Guatemala

As I looked around the tiny hotel room, now stuffed to capacity with a family of five and our eleven bags, I wondered if we’d done the right thing. It was hard to believe that we’d sold our large, comfy home in New Zealand and most of our belongings in exchange for this. Outside the streets of Antigua, Guatemala’s best known colonial city, beckoned, but I wasn’t sure I could handle the kids here by myself. My husband Rich, my faithful travel companion for sixteen years, had gone on strike suffering from exhaustion and jet lag. My only ally in a 10,000 kilometre radius lay prone on the bed and refused to budge.

Meanwhile my youngest child, Kiara, aged two, was whining. With unfortunate timing, she’d broken her arm and developed a terrible tummy bug about ten days before our departure so a once happy and energetic girl had been replaced by a miserable, lethargic cry-baby. At the opposite end of the emotional scale her brothers, Max, five, and Luke, eight, were running round the minute hotel courtyard laughing uproariously. The colonial hotel with its inner courtyards and fountains, its tiled floors and decorative touches just hadn’t been designed for a large, noisy family. These small spaces were created for smaller, slower and quieter people than us.

Where We Came From

Our children were born and raised on Waiheke Island, just off the coast of New Zealand’s North Island, a thirty minute ferry ride from Auckland City. Waiheke’s a serene and beautiful place, well known for its perfect beaches and famous vineyards. Up until this point the Candy kids had spent the majority of their time running and playing barefoot in a place with only 8000 residents, little traffic and no traffic lights.

Waiheke Island is the perfect place to raise young kids, and the Candy kids had enjoyed a sheltered existence with the security of living and growing up in a familiar place, surrounded by people they’d known since birth. Now we’d turned their world upside down, immersing them in a foreign culture with an unknown and incomprehensible language. The only familiar objects were the ones we’d brought with us. Exhausted after our 27 hour journey, I needed to remind myself why we’d done it.

Our Journey Started in the UK. Where Would it End?

Both me and my husband were born in the UK, but Rich was raised in Kenya. We both love travelling and we met in the Sinai in Egypt, so that’s where our adventures together began. For years we travelled, worked or studied in Africa, South East Asia, the USA, France and the UK, before finally deciding that enough was enough. It wasn’t that we wanted to settle down and stop travelling, just that we wanted a base, a place where we could keep our stuff, a home where we could one day live forever and raise a family.

Neither of us wanted to settle in Britain, but New Zealand fitted the bill: safe, unspoilt, and under populated. After a long, arduous process involving endless application forms, medical exams, and procuring certified copies of every official document that ever crossed our paths, we managed to get New Zealand residency. Our friends in England were horrified, especially our Australian friends who seemed to take it as a personal slur. The typical response from family and friends when we told them the news was disbelief:

“New Zealand? What do you want to go there for?”

But we were used to this. It seemed as if every time we packed our bags and went to a new place we got that same reaction of horror, combined with total incomprehension. Ten years later when we left New Zealand and told people we were moving to Panama the reaction was the same again:

“Panama? What do you want to go there for?”

I’d love to know what you think of this opening to my book. Would you like to read the whole story of how we moved from New Zealand to Panama, then ended up living in Costa Rica for a year, before finally moving to Australia? I’m excited about this chance to get feedback from my readers now as I complete my manuscript ready for publication.

Two years later I haven’t progressed with writing the book – too much blogging, travel writing and copywriting for other people! But I’ll get there one day.

Please add your comments below and remember to subscribe by email now or to the RSS Feed, if you haven’t already, so you don’t miss out.