One of the best things about living at Dingley Hall was seeing the look on your friend’s face when, after droving up the long driveway and turning the corner, the building came into view. But I could never leave them gaping for long before I confessed that we didn’t actually live in the whole house.

Dingley Hall was the ruined shell of a grade 2 listed building in the English countryside when it was bought and divided it up into 11 houses and apartments. It’s quite common with buildings of that type and although Dingley Hall is a private residence I’m sure there are similar places that have been turned into hotels where you could stay.

We moved to Dingley when I was ten and my mum and dad lived there for about 30 years, long after I flew the nest. But I still spent a lot of time there when I came back from my travels. Our house was The Cloisters which had three towers, walls a foot thick and small drafty windows. I’ve spent a lot of time sitting by the open fire trying to stay warm.

The last time I was there with the Mucho Man and the Candy kids for mum’s 70th birthday party we took some mock wedding photos by Dingley Church which is at the bottom of our garden because it’s the perfect setting for an English country wedding.

Now we’re really married and thinking of buying our own house here in Australia. I’m sure it won’t be stately in any way but I hope we can fill it with more magical memories. 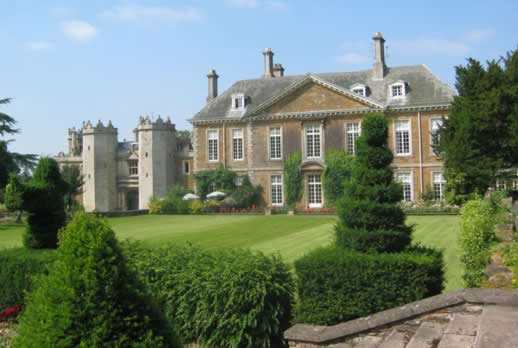 The Cloisters is on the left in this shot of Dingley Hall. 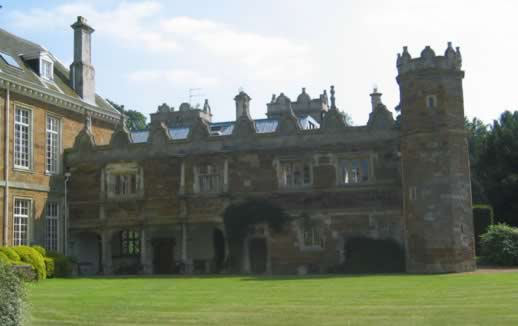 You can see our front door under The Cloisters where swallows would nest. 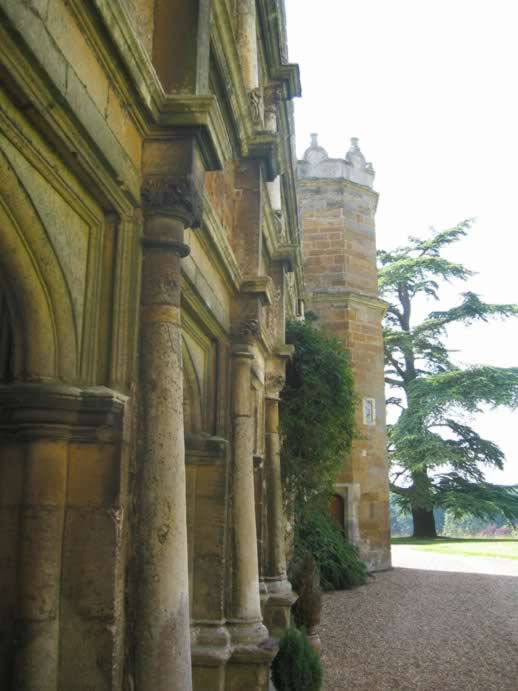 It looks as if The Cloisters are crumbling away slowly in this photo but hopefully they’ll be around for a few more hundred years. 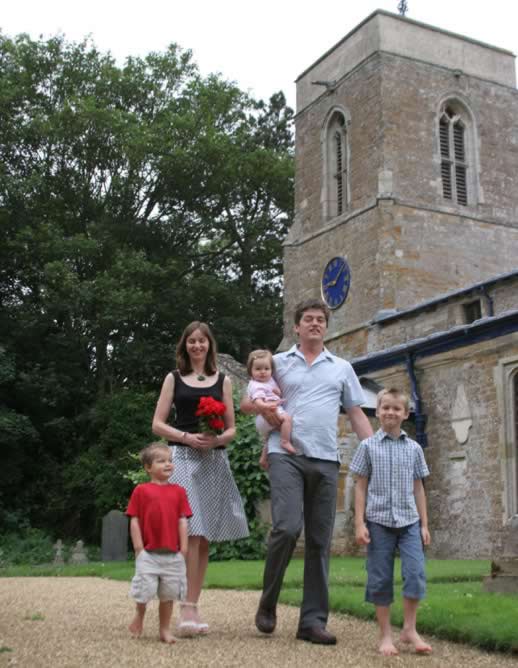 Our mock wedding picture taken at Dingley Church in 2005.

Where did you grow up?

Ahh love this! What a beautiful place to grow up :) I grew up in about 9 different houses in Wiltshire and Devon.

Sounds like a lot of moving but I hear they’re beautiful areas. Sadly I don’t know the UK that well as I spent most of my time trying to escape it! I think I have been to Wiltshire though and Devon is on my to do list :)

I grew up in the ’60s in a typical suburban “ranch” house in the USA. So far removed from your lovely Dingley! Hope to visit the UK soon & tour more homes like yours. Keep up the excellent writing, Annabel!

Thank you – that ranch house sounds quite exotic to me. I don’t think we have that style in England :)

What smashing photos and what a splendid place to run around as a child Annabel. And a great name to go with it. I bet you played some fantastic games in the grounds there.

Well I am right beside the house I grew up in, a farmhouse called Marketgate. Mum turned the old stables in a great wee granny’s house and sold the big house. So now a young family is there again. I’m in bed in an attic room with sloping roofs, loving being here.

Wow, what an impressive, beautiful house!!!! Absolutely has a lot of charm and grandeur!

I grew up in the most ugly, boring provincial town. The appartment of my parents was at a city square,, designed around the 60’s. Hence: totally characterless architecture. The flat itself had no character either.

When I was 13, my parents built a new house in the countryside. It was huge, with an enormous garden around it.

Somehow my family had gotten this crazy idea to go and live there as a sort of extended family: my parents, brother and me, the parents of my father, and three unwed sisters of my father.

The livingroom was of grotesque dimensions, capable of sitting at least 30 people. And there were 8 bedrooms.
When it was finished, my grandparents decided they were too old to move and preferred to stay in their old house. One of the three sisters unexpectedly got married. My brother was sent to boarding school for disciplanary reasons. The two aunts did move in, as did my parents and me. But soon the sisters and my parents got into conflict, so the sisters moved out. I left the house at 18 to go study. So my parents lived in this enormous, unmanageable house for overr 25 years with just the two of them. Quite ridiculous!

My own house is very important to me. Nothing reveals so much of me, as my house, my home. It is totally me and I am very happy with it.

Hi Annabel…
I lived in lots of places, in England and OS, before we came to Australia in my early teens. My favourite memories are of the time we lived on a farm in Minsterley near Shrewsbury – in a huge old farmhouse of quite modern design from the 1600s :-) . It was too cold for my parents liking, though, so we moved to a different village and a newer (but characterless) house with central heating. That didn’t last long either and we moved to a somewhere in-between sort of house (which had both character and central heating) on the edge of another tiny village. I loved Shrewsbury, though, and was sad to leave and didn’t thank my parents for choosing to go, but our family were wanderers and the warmer climes of Australia called…
…mmm, I say this as we drop towards an expected overnight low of zero degrees celcius with our open fire blazing and the winter doona airing out, but I totally love my bush hideaway, surrounded by brittlegums and black wattles and early morning mists… a far call from the Shropshire countryside of my distant youth, but a place filled with its own magic.

Wow! Priceless. Love Dingley Hall! Could be a movie set. Can I drop in for tea next time you are there?

Lol, I wish, my current place of abode is rather more down to earth :)

Hi Annabel.. This is really a beautiful place.. love to visit it someday…

When I was a child — in the 1960s — Dingley Hall was bought by Colin Forsyth, my mother’s almost-husband for a long while. I well remember exploring the decaying rooms with layers of peeling wallpaper, even a broken grand piano in what I termed the ballroom, rot everywhere such that you had to watch your footstep, exposed joists, gaping holes in ceilings, halls and floors. Haunting and tragically magical. Although Colin gutted the house and demolished extensive Victorian extensions around the back, it was to save the best of it. Originally the house had standard multi-pane windows — not the not entirely convincing windows put in, I presume, by the house’s secondary rescuer, Kit Martin.

That’s an interesting story and one I didn’t know – Haunting and tragically magical – I love that, it sounds brilliantly spooky. We bought The Cloisters from Kit Martin, I think it was one of the first houses he renovated and he lived there himself until the renovation was finished.

There was rumored to be a secret underground passage from The Cloisters to the church which also gaves us the spooks as kids – it was a good place to scare friends on sleeppovers with ghost stories ;)

The fact that I occasionally search the web for new photos of Dingley — thus discovering yours — shows the impact the house had on me many years ago. What a place to live! I still remember the spectacular and indescribable colour of the stonework.

As you probably known, the treasonous entrance porch (with, if I remember, Philip & Mary & 1588 carved on it) on the left of your first photo originally faced the Renaissance cloisters, the main entrance of the earlier, fortified house being through the doorway between the towers of the cloisters.

My mother was wandering around the house once when she encountered a man dressed in elegant clothing from another era — who went around a corner and then vanished!

Great to hear from you! There are a few ghost stories about Dingley Hall although I never saw one :)

Hello Annabel,
My name is Linda and I was your mums student midwife at the Leicester Royal infirmary from 1995-1999. I am Canadian and returned home to Canada after my little daughter was born (we relaxed postnatally at Dingley with your parents for a few days), then once home in Canada I opened my own midwife practice. Your mum was very kind to me and she spent many many hours on my training. I would love to see her again but I have lost track of her. Would you mind letting her know I think of her fondly and have appreciated her valuable wisdom every day of my working life. I have delivered over two thousand babies safely thanks to her sensible and practical wisdom. I am visiting Leicester this week and would love to see her again if she is still at Dingley. I could not find contact information for her but I did remember she had a daughter named Annabel, so I googled you. Please give her my warmest regards, and if acceptable I would love to see her.

Previous post: 52 Exercises: #16 Outrigger Canoeing (and What Floats Your Boat?)

Next post: How to Tell People the Truth About Yourself