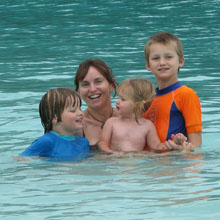 Is Candy my Real Name or Not?

Life’s complicated isn’t it? But most people at least know what their name is. Sometimes though, I’m not quite sure.

Often when I go to the library or a shop which I have a rewards card for they ask for my name and I tell them. Then they say they can’t find my name so I suggest another name. I get a few strange looks but we get there in the end.

Here’s why I get confused about what my name is.

I was christened Annabel Moffatt. I was named Annabel after my mother’s sister who died aged 13 in a horse-riding accident. Moffatt is my father’s surname.

Moffatt is also the name of a town in Scotland which is a popular place for people to elope because you can get married there when you’re 16.

Before he died my father spent a lot of time researching and creating family our family tree and coincidentally my mother has a direct bloodline back to the Scottish royal family including Robert the Bruce so I like that I have a Scottish surname to go with my Scottish heritage.

But still, that surname Moffatt had a few bad associations for me. Despite being painfully thin as a child the fat part of Moffatt was always a cause for jibes and it’s also easy to emphasize the last syllable and make it sound like fart.

So, as a child, I always had a little fantasy about getting married and changing my name.

Of course I grew up to be a raging feminist but we twist things to suit our own ideals so when I met my future husband Rich Candy (aka the Mucho Man) I was ecstatic. Who wouldn’t want to be called Candy? Also I wouldn’t have to spell out my name any more because everyone knows how to spell candy.

But sadly the Mucho Man didn’t want to marry me.

“It’s nothing personal,” he said. “I just can’t see the point in getting married. I’ve never wanted to get married and I don’t want to get married now.”

15 years went by. We bought and sold our first home together, we had joint bank accounts and we even had three children together who were all blessed with the surname Candy.

So now I was the odd one out in our family with four Candys (Rich and the three kids) and one Moffatt (me) so I worked and worked on the Mucho Man drawing on all my powers of persuasion about how we should get married, my main argument being:

“I want to have the same surname as everyone else in the family.”

This was capped off with:

“I’ve always wanted to get married and if you won’t marry me who will?”

But even that was topped by the greatest draw card of all:

“But if we get married we can have a honeymoon!”

The main reason I wanted to get married as a child was so I could go on a honeymoon. I really didn’t care about who with or give much thought to what my future husband would look like, what his values would be or what we’d have in common.

I was bitten by the travel bug at an early age and getting married seemed like the perfect excuse to have a honeymoon.

Even the Mucho Man was tempted by the idea of a holiday.

The other problem about us getting married was that we have friends and family all over the world so many loved ones might not be able to make a wedding in New Zealand where we lived at the time. So we decided to elope.

After many happy months poring over travel sites and guide books I decided Vanuatu seemed like the perfect place for our wedding. Vanuatu is a series of a remote tropical islands in the South Pacific with a unique culture so we’d be able to have a beautiful beach wedding as well as an adventurous honeymoon off the beaten track in an exotic location. Albeit with our three children in tow so not a traditional honeymoon.

So we were married on the beach at Aore Island Resort just off the remote outer island of Espritu Santo by Reverend Dick (yes, that’s his real name) since, although we are not religious, that was the only option in Vanuatu. I’m not sure anyone had ever got married there before but we had a fun with a local string band, a splendid cake and mocktails for the Candy kids. 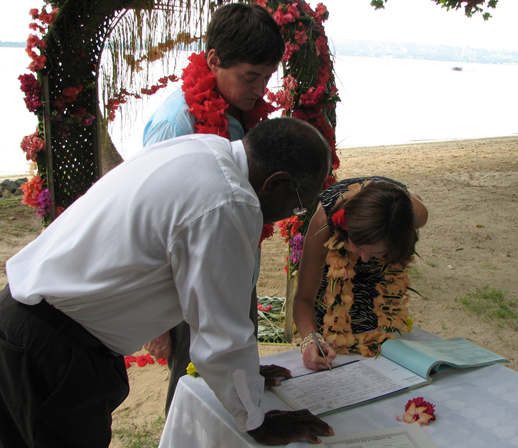 The long-awaited honeymoon was fantastic. We ventured away from the safe haven of our resort to traditional accommodation at the far end of Espriro Santo. We visited the blue hole, swam at Champagne Beach and visited traditional ni-Vanuatuan villages where people live in grass huts and settle arguments with a spear.

Sadly our kids picked up a terrible tummy bug so it was more of a poopymoon than a honeymoon which was another interesting experience. 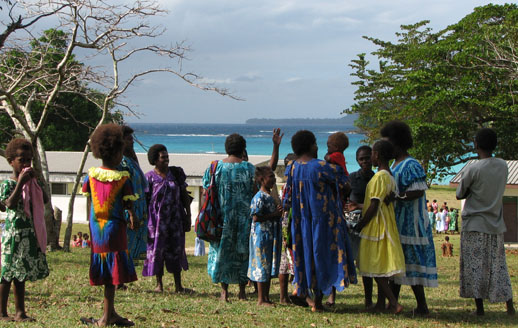 Then it was time to come home and start my new life as Annabel Candy.

But everyone in New Zealand knew me as Annabel Moffatt and, since Rich and I worked together on our own business we both wanted to use Moffatt on our company website so we didn’t look like a mom and pop business… even though we were.

Then I told Rich I’d change all my official documents when they ran out but the problem was although I liked Annabel Candy I liked Annabel Moffatt. I still do. So I didn’t want to kill her off.

Plus I couldn’t be bothered to jump through all the hoops required to change my name on two passports, several bank accounts and credit cards in three different countries and two driving licences. So I never did.

I just used Candy most of the time in daily life but all my official documents said Annabel Moffatt.

Then I moved to Australia and started blogging and using Annabel Candy online. I always intended Annabel Candy to be my pen name but it’s impossible to use that just for writing now.

Little by little Annabel Candy became a global brand and eventually I had to change my company website to the name Candy too because no one knew who Annabel Moffatt was.

That felt fine because being the wife of Rich Candy I am entitled to the name.

Then we went to see an Australian lawyer to get our wills updated. He said our marriage in Vanuatu and wedding certificate might not be valid and recommended we get married again.

But that was another unexpected complication in life and we haven’t got married again.

So if I die tomorrow I will die intestate, unsure if I am married or not and confused about what my name is.

But hopefully I am married and life will go on with fewer complications no matter what my name is.

Are there any little complications in your life? 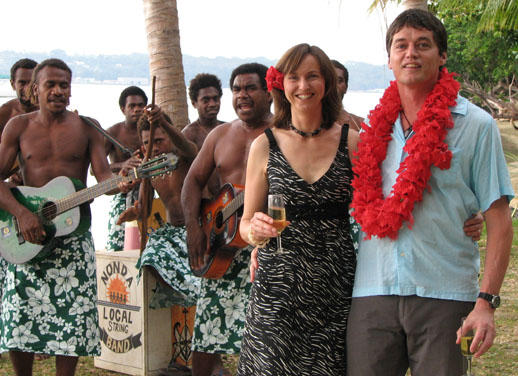 Newly weds Mr. and Mrs. Candy and a local string band in Vanuatu

This is hilarious! You should write a book about this. I can see a chapter titled: Honeymoon or Poopymoon? LOL!

But seriously this should be at least a screenplay for a comedy, don’t you think?
b

Lol, it was quite funny! I need to write more about what happened after we left the resort and ventured into real Vanuatu. Thank you so much for reading and laughing;)

I agree with Barbara. Your sense of humor lends itself to a smash hit.

So, when are you writing the screenplay?

Oh thank you so much:)

Oh Gosh. I have changed my name five times, not usually legally. Finally, I had to send all my documentation in to get a passport renewal and they came up with a name that does not agree with my driver’s license, banking, social security or anything else. Maybe I will stay home. If I leave the country, they may not let me back in!

When I had a husband who would not marry me, I just used his name anyway. I never liked the name I was born with. One of my names was chosen for its good numerology outcome. I feel like I should let sleeping dogs lie at this point because my country is taking its internal security very seriously and they may not believe that I am me!

It would take hundreds of dollars to get it resolved legally.

I still actually dream of changing it again – this time I will call it a pen name.

G’Day Annabloodybell,
Until I read this post, I thought I had some complications in my life. Silly me!

I’ve merely got four adult children, an Indian son in law, a Japanese daughter in law, six grandchildren, another on the way and no teeth. I’ve also had a business for 34 years and a wife–the same one–for 46 years. Did I mention that one of my three daughters and her partner took their twins along to their wedding!

Whatever complications I have in my life are but mere bagatelle compared with the Candywoman.

And there’s absolutely no way that I could make them sound as hilarious as you’ve made yours.

Annabel, I usually end my blog comments with “make sure you have fun.”
Quite superfluous in your case.

Thank you so much for sharing all that. You have a few extra decades of complications on top of mine!

Love the sound of your multi-ethnic family. I hope mine will go that way. I fact I already suggest to them what nationalities they might like to visit and where they might want to live so I can travel around visiting them. One kid in Europe, one in Central or South America and one in Australasia would be perfect;)

Congratulations on your 46 years of marriage. That is phenomenal!

Ah, Annabel, you never cease to make me giggle. I thought I knew the story, and then you always seem to add a twist! :) Whatever names you and Mr. Mucho use or ultimately decide on, cheers to you and your marriage and a lifetime more of unconventionality!

Thank you! I’ll drink to that:) Love your new photo.

You can still do a will and you really should!

I know! Thank you so much for pushing me. It’s something I’ve been putting off for three years but it makes me feel bad not having one. I will get it done asap now:)

I would not expect anything less adventurous than this from you:) I love both names and I can see your struggle:) I always felt mournful after deserting my maiden name to take on my husband’s – it felt like losing a part of myself! (But very soon I am going to get it back and being “exotic” again will feel weird, but right, too:)
Love your stories:)

Your name does sound exotic to me. I love it:) Sounds like you have some exciting adventures ahead.

Hi Annabel, This is so funny and so very you. I think I shall just stick to Annabel and keep it simple!

Kind of similar story here as I am Smith but the other five in the family have a different surname. We haven’t got married but I approriate their name when it suits me. Wish I had always used it on school documents!

But I could never leave behind the glorious name of Smith; the most common name in Scotland, you know.

Too funny. Too relatable! I use my maiden name for every day life; my married name for the kids school and health care/medicare; and, ??? for facebook ;)

That was a butterfly symbol that didn’t show up in the ??? space. Think you got that though :)