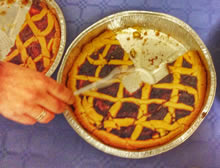 I blame Hitler for my over-eating habits. I do.

Like my mother, who grew up with food rations during World War 2 and blames constant hunger during childhood, I fear hunger and hoard food.

But although my pantry is constantly stuffed with non-perishables and my fridge with fresh food I hate food waste.

Even when I’m full I find it hard to leave food uneaten on my plate. I loathe throwing away leftovers which no one will ever eat.

Finding a bit of moldy cheese in the fridge feels like a personal rebuke, a stark message of failure and wrong-doing. In a restaurant where the portions are too big for me to eat I’m left with a huge sense of personal shame.

I feel bad about wasting food and rarely do it because world hunger’s still a problem and a UN Food and Agriculture report has shown that food waste is a major contributor to carbon emission, water wastage and global warming. With three kids and thousands of miles in travel to my name I’ve done enough damage to our planet and I’d like to reduce my global footprint as much as possible now and in the future.

So I’m focusing on combating my over-eating and emotional eating and I’m making progress. Here’s what I’ve been doing and five self help questions to ask yourself if you’d like to control your eating rather than be controlled by it.

My food hoarding ways and eating attitudes were formed way back in the past. As a child our family pantry was stuffed with goodies. Like mini chocolate bars I could easily eat by the handful after a long day at school and potato chips in a variety of favors if I fancied something savory.

Then there were sugary yogurts in the fridge and an overflowing fruit bowl on the kitchen table. I love mandarins and, after wolfing down the chocolate, chips and yogurt, I’d eat five or six mandarins too. All of this before our evening meal.

Despite the vast quantities of food I ate I was stick thin and constantly teased for my skeletal proportions. My mother often said she was embarrassed to be seen with me because I was bony and covered in bruises due to general clumsiness and being “accident prone” which often left me with bruises, crusty scabs or swollen welts.

But I’m getting off the topic. The point is that, like many of us, as a child I could eat as much as I liked of whatever I liked and still be thin. Now I’m in my forties that’s not the case hence my recent post 7 Weight Loss Tips for Women Over 40.

2. What emotions drive you to turn to food?

What’s really disturbing is that, as well as having a tendency to over-eat, I’m an emotional eater. There are the many reasons I eat apart from hunger, including but not limited to:

Even though I know the principles of healthy eating and am lucky enough to love fruit, vegetables and seafood but not meat or fast food I have a sweet tooth. We rarely eat desert at home but (as mentioned already!) I love chocolate and, from time to time, have been known to make a big dent in an extra large bag of salt and vinegar kettle chips.

The weight has crept on over the years and now I need to be mindful about what I eat. Even though I’ve lost weight this year lately, despite what feels like months of deprivation, my weigh has plateaued.

Over the last 12 weeks I’ve read many books about paleo eating and fasting and made big changes to the way I eat.

I avoid all processed foods. Even the special treats I used to reward myself.

I’ve cut back on grains and gluten, almost cutting them out of my diet altogether, although not when I was learning how to eat in Puglia. Total grain and gluten bans are not part of my plan because I want healthy eating to be a choice not a rule. I hate rules.

I’ve cut out sugar too but old habits die hard and I allow myself dark chocolate at the weekend and bake sugar-free gluten-free cakes or deserts from time to time which satisfy my sweet tooth but shouldn’t add pounds.

4. Will the latest research about eating habits inspire you?

I’m trying to fast twice a week as recommended in many of the books I’ve read. Apparently paleo people not only ate only plants and meat (and no processed foods like chocolate and chips!) but they also regularly missed meals because food was in short supply.

Apparently we should skip meals from time to time too even though there’s a glut of food all around us so we are constantly surrounded by temptation.

Fasting appeals to me because  less food to buy and cook is a win for any mum. Plus, for an emotional eater and an over-eater, it’s easier to not eat at all than to eat a small (or even normal-sized) portion.

So on Mondays and Wednesdays I try to skip dinner without my family noticing because I don’t want my daughter to pick up any funny eating habits from me. It’s easy enough because I’m usually out in those nights so no one notices and I’m busy so I don’t miss the food.

I hope paleo eating and fasting aren’t just silly eating fads. I’ve read many books lately and these ways of eating seem like the real deal with scientific data showing paleo foods and fasting will make us slimmer and healthier by preventing a wide range of diseases from irritable bowel syndrome to dementia.

5. Do you really want to change?

So my work to make positive life changes continues. I’ll never be perfect but I’ve made huge progress in the areas  of over-eating and emotional eating. No longer do I over-eat unconsciously. Some days I still give in to the urge to eat those kettle chips or that chocolate but I’m well aware of why I’m doing it.

Most days I avoid temptation and acknowledge that willpower doesn’t work by making sure temptation is not lurking in my kitchen. In other words I make sure there’s no chocolate or chips in the house.

Some days, thanks to mindfulness and meditation, I can even feel the emotions rip through me, see the food cravings rise and watch them curiously without rushing to the pantry. Then I take time to wonder where the cravings and emotions came from and why then.

When I lie on the sofa to rest the feelings and cravings pass away. I feel my breath moving in and out. I notice my thoughts coming and going and I feel at peace. I can see the growth. I can feel the change in my being.  I can resist being controlled by my emotions.

It doesn’t happen every day but it happens more and more.

Maybe I’ll never be entirely free of emotional eating and over-eating but if I can eat consciously and avoid them most of the time that will be a great thing.

World War 2 ended 69 years ago and it’s still affecting my eating but no one’s to blame. Not Hitler, not my mother and not even me.

The past is past but if we take care of ourselves in the present the future will turn out all right.

What drives you to emotional eating or over-eating? What healthy eating can you share?

Hi Annabel, I need to read the post on not over eating when on the road, or the high seas in my case next weekend…. you’ve covered lots of my own issues in eating here and it’s helpful to see how you are going? I’m about to have a week of making notes when I eat, to stop the silly nibbling that I do far too often. Luckily I love healthy grub too, it’s a bonus that. I will try your more mindful approach too. Ta!

I think it’s fairly common and great you’re aware of the problem too.

Annabel, thanks for the thoughts on a topic that touches many of us. Understanding ourselves better does help. Not always dwelling on the negative and a focusing on the successes, as you are successful, I believe helps. Keep up the great work. Fran

Ok. So see myself in this article. I also over-eat sometimes and I do not know what to do, but I decided to go into fitness next month and start eating healthier. I guess if you want to eat healthier you have to prepare your meals in advance.

I think it’s important to make your own food – you’ll eat better and it slows down the eating process too because good food takes time to prepare.

So I srtarted runing and already feel great :) But food food…well its getting better and trying to eat healthier.

I’ve never heard it before but it sounds like a good plan to me. Certainly hanging around with other people who are into their health and fitness is really important for keeping you on track.

Wow! I can so relate to so much of what you have written here, thank you for putting it out there. I have also been experimenting with sporadic fasting, skipping breakfast as I feel comfortable with it. Interestingly, I find it easier to skip breakfast when its unplanned – rather than sitting up the night prior and obsessing over what I won’t be eating the next day.