Is it Safe to Travel to Japan? What You Should Know One Year After the Tsunami.

2.4 million people would prefer not to know. That’s the drop in tourists traveling to Japan after the March 11 tsunami in 2011 as compared to the year before.

But tsunamis are nothing new to Japan. In fact the word tsunami comes from Japan, with detailed data recording earthquakes in Japan from the year 684.

The first recorded use of the word tsunami in English was back in 1896 in National Geographic Magazine after a tsunami hit Japan yet again. There’s no denying that Japan is a country that has experienced, and been devastated by, gigantic waves caused by earthquakes deep below the ocean for thousands of years.

But most of those tsunamis and earthquakes hit the same spots repeatedly as was the case with the 2011 tsunami.

There exist in Japan markers placed hundreds of years ago inscribed with words like these:

“This is where the tsunami reached. Do not live below this marker.”

But, on my trip to Japan last month, my guide also explained that, as the years went by the memories of tsunamis past faded.

Then, as the population grew and land became short, people were forced to move to less populated areas.

Plus so many industries in Japan, where seafood is a huge part of the diet, are based on the coast so it’s easier for Japanese people to live close to the ocean where they can find work.

The 2004 Boxing Day tsunami shocked us because people from all over the world were hurt or killed and because it affected holiday resorts. Reading that news we travel lovers got the terrifying sense that it could have been us there holidaying on that beach.

But nothing could have prepared us for the images and video recordings of the March 11 tsunami in Japan. Nothing.

The unstoppable force of that water seared itself onto our minds and hearts. The devastation, the lives lost and then the horrific aftermath with the radiation leak haunt us still.

Of course the natural instinct is to stay away from Japan. But, just as tourism has dropped off radically, so the suffering escalates and endures because, like many countries, tourism is an important part of the Japanese economy.

I just returned from a trip to Japan and I am happy to report that Japan is safe to travel to and around.

Of course it’s advisable to avoid Fukushima with its unsafe levels of radiation. But the rest of Japan is open for business and pleasure, including the best places to travel to like Toyama and Kanazawa in the Hokuriku region and Kyoto.

My flights beween Sydney and Tokyo, both to and from Japan, were packed with Australians heading for their winter holidays and winter sports.

“We love ski-ing and we wanted to visit Japan so that’s what we did.” One fellow passenger told me.

“But weren’t you scared about tsunamis, earthquakes or radiation?” I asked, and was answered with a snort and a shrug.

“Not really. Life’s too short to worry about things that may never happen. I’m probably more likely to get run over by a bus. You’ve just got to get on with life. That’s what the Japanese are doing and that’s what has to be done.”

It was an honor to visit Japan recently. To speak to the Japanese people, to experience their culture and share their lives for a short time.

There’s no doubt that tourism will bounce back in Japan.

There’s no doubt that we can help that happen.

There’s no doubt that we can aid the Japanese people by spreading the word that it is safe to visit Japan.

Japan and the Japanese people welcome travelers. They will thank you for visiting them. They will appreciate your support.

And you will be entertained, enraptured and enriched by your travels in Japan.

That’s what every smart traveler really needs to know.

What excites you most about travel to Japan? The food, the culture or the people? Or maybe something else like the amazing snow monkeys? 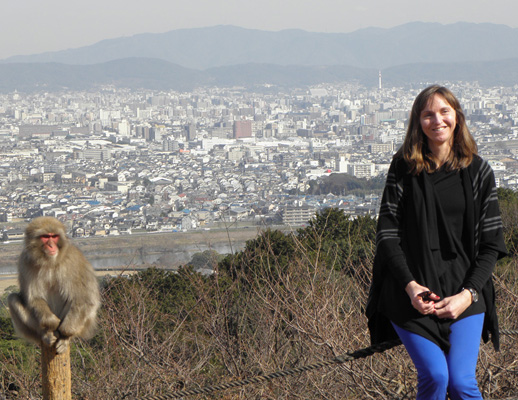 Photo credit:  Hokusai painting – see it at the Victoria and Albert Museum in London

We’ll be visiting Japan this year and have never considered it a danger. Maybe it comes from growing up on the other side of the Pacific – the west coast of Canada. We’re used to the reality of earthquakes and don’t consider it a dangerous or risky place to be. I’m looking forward to your stories from Kyoto!

Great to see you here and so exciting to read you’ll be visiting Japan soon. Yes, I’ll have some stories about Kyoto up here soon soon and hope you’ll find some fun ideas there:)

Hi Annabel! I love Japan! I was fortunate to spend almost a month traveling all over that amazing country. It’s hard to say what is the most exciting part about Japan as every city has such distinct personality and style. I will say that Kyoto is a very special place. I cannot wait to go back one day and experience the magic of the temples and scenery. Of course, I also miss the shopping and delicious food in Tokyo! I could sit all day and people watch for hours in Tokyo:)

Hi Annabel,
I know of several people who were due to visit Japan at about the time of that last devastating tsunami (including a Japanese family who go back to visit ever year so the children can spend some time at school there) – most put off their journeys, not because of the tsunami, but because of fear of the radiation. And sadly, whilst the worst of that disaster remains in the Fukushima area, many people are concerned about the possibility that the radiation may have been/be spread by prevailing winds, etc. I think it is probably not knowing or fully understanding that problem that is more likely to be impacting on tourism.
I’m happy to report that the Japanese family did go for their annual trip (only delayed by a short time), another Japanese friend is just finishing a year there, and I know of several people who have had wonderful holidays in the last couple of months.
I think it Japan is still on people’s list, they just want more reliable information about when, where and how it is safe to visit.
Cate

Thanks so much for sharing that. I checked with an Australian Government site called smart traveller and their recommendation is that all Japan is safe excluding an 80km radius around the Fukushima power plant.

We are scared of what we don’t understand and it’s especially important that people get information from places they can trust:)

Great to hear people are returning to Japan now. I’m sure the numbers will pick up again.

I’m certainly not the world traveler you are Annabel but Japan is quite far down on my list of places I’d like to see. Nothing against the people or concern about tsunami’s. I need to see more of Europe and then visit you in Australia before I venture to Japan.
b

Lol, I’d love that:) I have a long wish list too and it’s important to prioritise the places you most want to visit!

You have such a big heart, Annabel! Thanks for doing what you can to help the people of Japan.

It feels like Japan has infused your writing with another stream of passion and intelligence. I’m loving this set of articles.

Thanks for the lovely feedback! I learnt a lot in Japan:) I am always learning and feel so lucky to have visited.

Interesting to read your take on traveling around Japan Annabel. I live here full-time, raise my children here and we have just built house so we are definitely here for the long haul. I do worry about the long term effects that the disaster in Fukushima will have on us but I also know that cesium is low in our area {same as before the disaster or less}, we avoid buying food from the Fukushima, Tohoku and upper Kanto regions {as much as I would like to support the farmers up there my children`s health comes first} and do not buy Japanese beef or fish currently {fish I will buy from down South but most packets just say “from within Japan”}

A year on and Japan is still very much recovering from the disaster and it has seen a huge decline in Tourism as you mentioned but there are a still a ton of Non-Japanese still living in Japan. I left the city {I am in Chiba just outside of Tokyo} one week after the quake- I was worried about radiation but it was definitely more the aftershocks that were worrying me more as at the time I lived on the 7th floor of a mansion building. I did not leave Japan although thought about doing it temporarily and organized Australian passport for my younger son who had no passports at the time. We didn`t end up feeling the need to leave though.

Japan is my home. I feel safe here. Of course I worry but I am sure I would be worrying about something else if I was living somewhere else too. It is {my} natural instinct to worry in general.

Thank you for sharing your views on Japan

Thank you so much for sharing your story. I feel so sorry for the people who live in the Fukushima area and cannot leave because they have no where else to go.

You are in the enviable position of having the choice to leave but choosing to stay. Thank heavens you are not in an area directly affected by radiation which is safe for you and your son.

You have lived through frightening times and you didn’t run away from it. That’s a great example to set your son. I guess you found out that Japan really is your true home and you will stick with it through good times and bad.

The good times will come back and we are thinking of you and everyone in Japan and sending all our positive energy your way:)

It’s nice to read this. My brother is actually just getting back from Japan in the next few days after teaching English there for a year, so I’ve kept up with a lot of the progress through him.

Nice post, Annabel,
Tsunami, earhquake…yes, i don’t think there is big danger.Though i would not discard radiation dangere at all. Contaminated food or water can be dangerous, and knowing how governments tend to conceal real level of damage, i think there is still some danger of “bad” food. Of course, noone will feel the effects immediately. But I have lived less than 200km away from Chernobyl till 1999, and i can tell that long term effects are very bad.
I have spend a month in Japan in 2010, and i totally loved it. and I am extremely sorry for what has happened. I do hope there is not danger, but I would still be cautious.

“Life it too short to worry” about radiation??

Well, I think Japan is unique and has many naturel places.
However Japan recent desaster is deep and the danger from radiation is not clear.
Rob

Hi Annabel! Hope you are doing well-it’s been too long. Now that it’s 2017, it seems tourism is alive and kicking in Japan-we just got back five days ago from a great 12-day whirlwind to Tokyo, Hiroshima and Kyoto. It was fantastic, especially because we had Tokyo residents Becky Purton (remember her from Marseille?) and her husband Shuntaro to guide the four of us (yep, took the girls) much of the time. Would love to catch up sometime soon!

Next post: How to Live Overseas and Have No Regrets