Training for, and participating in, my first triathlon has been all-consuming this year. I didn’t plan it that way, I just signed up for a free triathlon training course because I wanted to learn to swim and bike. But it took on a life of its own.

For regular readers who’ve been sucked into this behemoth here, please bear with me. I’m very conscious triathlon news has been monopolising this blog and I’m looking forward to balancing things out soon with more travel, wellbeing and midlife adventure stories. Those are the key elements of my blog and will get a fair airing right after this final triathlon update.

To wrap up my year of triathlon, here’s a personal breakdown of my first triathlon – Noosa Triathlon, including every stroke, pedal and step and tips that helped me, not only finish but finish well under my three hour goal time.

I’ve previously used adventure to deal with anxiety and exercise to beat depression. But it has to be said that triathlon training and participation caused a lot of anxiety too. Anyone who’s got anxiety will know that we anxious types tend to deal with it by over planning. I planned my triathlon to within an inch of its life writing endless lists from what training I would be doing each week to what I would need to bring with me on the day and what exactly I needed to prepare in the transition area at 5 am on the big day.

Over-planning and lists ease my anxiety. They let me think everything is in control and, if anything does go wrong it won’t be my fault. They help me sleep better although there was a lot of broken sleep it was mainly caused by anxiety about things I hadn’t planned like the logistics of getting to and from the triathlon given there are 9,000 people competing and all the roads are closed.

I’ve read about visualising success before and thought about doing it but I’d never actually done it before. I took this photo to try and visualise how good it would feel to finish and I’m trying to portray confidence but I still look  like a deer caught in headlights. 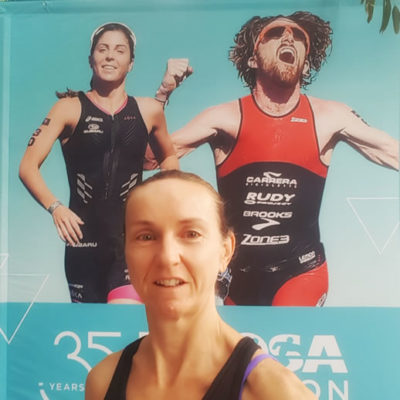 Nevertheless, I visualised myself on every step of the triathlon including how I’d use breathing exercises to keep calm before the swim and how I’d take off my cap and sunglasses and smile for the cameras on the final one-kilometre run. It helped. 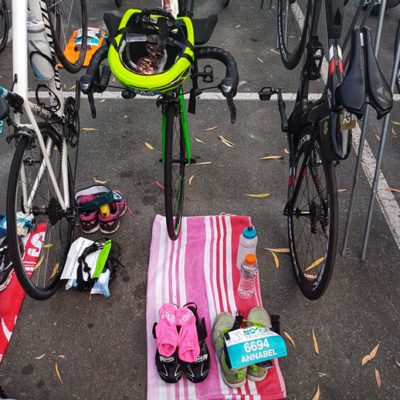 As well as completing each leg of the triathlon individually multiple times I’d also done a full distance triathlon training event with the Noosa Triathlon Club. So the route was familiar and I knew I could do it.

I knew what to wear, what to eat and how fast I’d be able to go. The lists helped me remember everything and I bought extras such as two pairs of goggles and three bottles of water just in case.

Swimming is my biggest weakness. Despite the sunny smile plastered on my face just before the race I have previously panicked, cried and been reduced to breaststroke during practice training sessions.

I’d also heard that the swim leg was rough, with people everywhere swimming over you and accidentally hitting or kicking you. I planned to swim at the back and the edges to avoid that but there were too many people on the day. I just ran into the sea with everyone else, tried to follow my friends, instantly lost them, but swam with all my heart anyway.

My swimming mentor yelled “concentrate” to me right after this photo was taken. She had previously recommended I try to draft in the swim, as swimming directly behind someone makes it easier and helps you go faster if you can ride on their bubbles. During swim practice, I could never manage to stay right behind anyone but during the triathlon, there were bubbles everywhere. I felt as if I was swimming on a highway of bubbles.

I also felt as if I couldn’t stop but had to keep up with the herd and that’s what I did.

I just kept my head down and kept swimming even when I got hit and scratched.

I’d factored 40 minutes for my swim but it only took 33 minutes which is fantastic by my standards – even though some people swam it in 22 minutes so there’s still plenty of room for improvement! 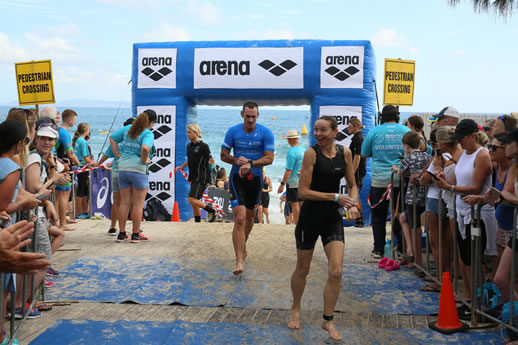 Transition 1 – From Swim to Bike 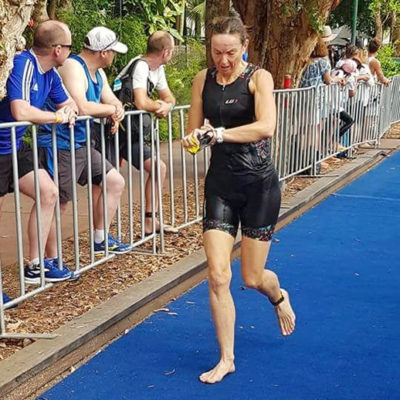 I ran harem scarem up the beach to the transition area. Heaps of friends came to see me and called out to me which was lovely. I was smiling and waving so much I almost hit someone myself. But I managed to run pretty fast and overtake a few people.

Everything in transition was organised so I just had to slip in my socks, bike shoes, bike helmet and sunglasses.

I also took a moment to pop two caffeine pills which I’d blue-tacked onto my bike frame. I decided I didn’t have the biking skills to swallow them while I rode but needed the caffeine boost to help me cycle and run as fast as possible.

In case you’re wondering caffeine is a proven and legal exercise enhancement. It will only work if you haven’t got a huge built up resistance to caffeine and should only be taken during a race if you’ve used it in training.

It’s supposed to work by lowering your heart rate which is counter-intuitive to what you’d think but I find it also helps me focus. 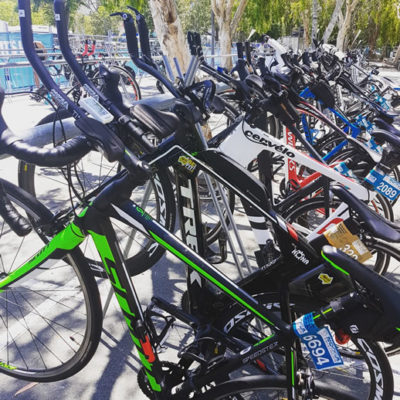 Once everything was done I grabbed my bike and ran for the mount line. 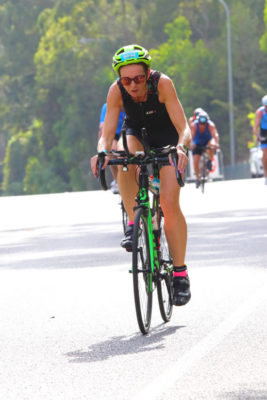 I bought a new Garmin Fenix 5s watch before the triathlon to record my swims and was pretty sure that I’d come out of the water in 35 minutes so I had time up my sleeve for that. However, I still thought my goal time of 1 hour 20 minutes on the bike was challenging and the pressure was on to achieve that and maintain my lead.

Here are the tips:

Transition 2 – From Bike to Run

This is a fast transition. I just took off my bike gear, clipped on a new belt I’d bought with my race number attached and donned my trainers. I also poured one of my water bottles over my head and chest to cool me down and took one bottle with me to drink along the route. 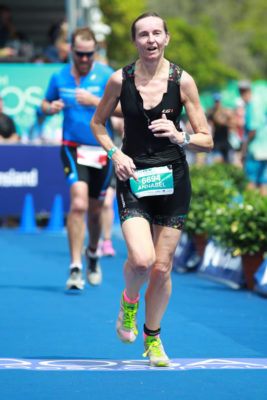 I ran a half marathon (21km) last year so the distance wasn’t too far and I started off great. But then I got really tired, as the photo shows. I look as if I’m about to collapse but I kept going.

As a non-sporty person who hates sweating, my key concerns were having a shower after the tri and changing into clean clothes. Once I’d done that, I found my friends at the Noosa Tri tent and sat down. All I could do was drink water and smile. 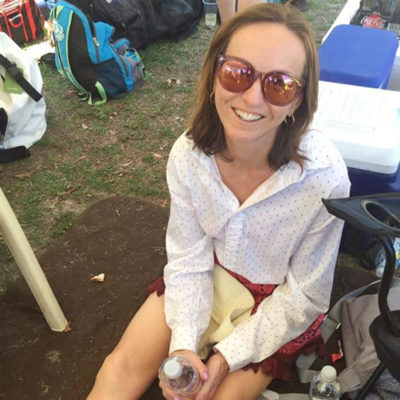 Was it worth it?

Yes! I haven’t felt this proud of myself since I last gave birth over 12 years ago. It’s a huge feeling of achievement. They always say you can do anything if you put your mind to it but this is proof. 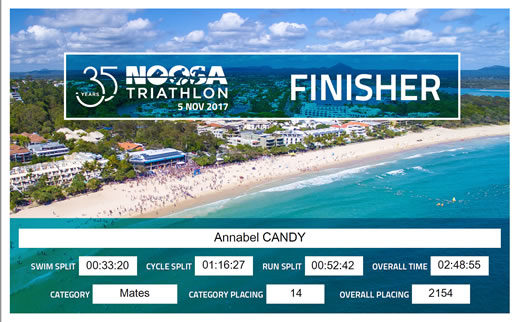 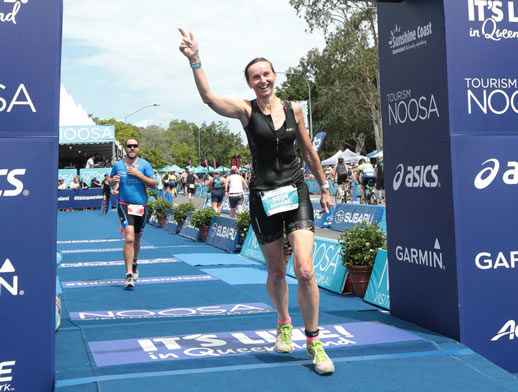 Stay tuned for more travel stories, ideas and inspiration. Get free email updates from Get In the Hot Spot – a weekly injection of tips to help you be more adventurous and have more fun. Click here now for free updates.