What Age-Bashing Can Teach us About Positive Ageing

So many viral blog posts that get shared thousands of times on Facebook, Buzzfeed and all over the Internet are vacuous rubbish.

Shonky linkbait with headlines designed to get as many clicks as possible. Deliberately controversial angles designed to polarize people and draw us in to the drama.

I try to stay clear of it but one recent headline made me so angry I made the mistake of checking it out, and what I read there enraged me.

27 Horribly AGED Celebrities on “entertainment” site Caliser took me over the edge from anger to disgust to sadness.  I’d rather not link to the post but you can find it at http://caliser.com/horribly-aged-celebrities/.

Even the headline with aged in uppercase, demonises ageing and seems to tar it with the same brush as crack addiction. But the catty remarks about ageing and ageing women (I didn’t notice any men) were the final straw.

“This is a list of celebrities who’ve looked worse with age than one would expect. As they’ve gotten older, these stars have become more and more unattractive. We’ve all seen our fair share of bad plastic surgery celebs, and some of these famous people certainly fall under the same category. Those that don’t create their own damage naturally.”

The premise for the article is as shallow as the grammar is bad.

Unfortunately there’s nothing shocking about magazines or websites ridiculing women for gaining weight, going grey or getting wrinkles.

What shocked me about this is that it isn’t just a personal attack on one woman, it’s an attack on all women over a certain age.

Since when did age-bashing become okay? Racism isn’t tolerated any more but ageism seems to be.

The article carries on:

“What celebs have aged the worst? What celebrities used to be hot and aren’t anymore? It’s a shame that some of these celebs are no longer recognizable, because everyone on this list actually looked pretty good when they were young. May this be a lesson for us all to watch our bad habits and not succumb to temptations of having too much work done.”

But this isn’t a lesson in healthy ageing at all. It is a sorry indication about how shallow society has become. It’s a foul reminder from a culture which so blindly worships youth and beauty that it fails to recognise the humanity that lies within all of us and the wisdom that comes with age.

Ageing is painful enough without the media attacking it and biggest lesson here is that age-bashing needs to stop.

I didn’t look at all the “horribly aged celebs” because you can get the gist about the horribly shallow and bigoted writer very fast. The post opens with side-by-side images of Brigitte Bardot aged 20-something and 70-something cruelly captioned:

“Brigitte Bardot was one of the most beautiful women that ever lived. Now she is crazy, old and looks like she smells of cat urine.” 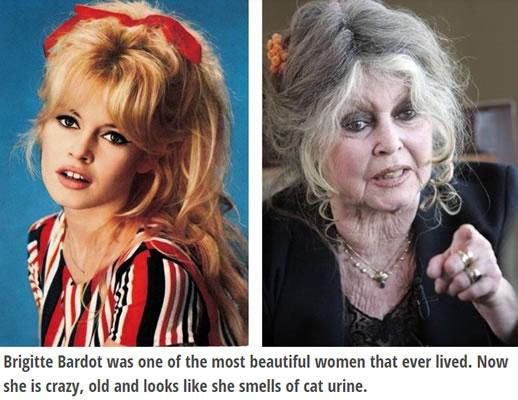 Of course there’s  the flipside to age-bashing but it’s not covered in mainstream media and I doubt that the Feminist Current article Aging while female is not your worst nightmare was as widely read. Surely the issue of age-bashing shouldn’t be of concern only to feminists?

Let’s end with some final thoughts on ageing from Brigitte Bardot herself.

Sure, she’s far from perfect with some troubling connections to far right politics and accusations of being racist, an ti-Muslim and anti-gay. I’m not holding her up as the ideal woman in any way.

Like all of us she’s a mixture of good and bad, possibly exacerbated by what practically amounts to child abuse – she was 15 when movie  director Roger Vadim discovered her and married her not long after.

After multiple suicide attempts and husbands Bardot now runs an animal sanctuary and dedicates herself to to animal rights activism.

Bardot has never resorted to cosmetic surgery or avoided the cruel gaze of the mirror. She withstands ageing with dignity and says about ageing:

“I gave my youth and my beauty to men, I am now giving my wisdom and my experience, the best of myself, to animals,”

Refuses to fade into the background, is passionate and fights for a cause.

For many women fading beauty and youth is a release. Now we can move on to the important stuff.

Who or what will you give your wisdom and experience to as you age?

Get In the Hot Spot’s weekly newsletter is an injection of tips for midlife travel, wellbeing and adventure. Hit this link now so you never miss out on new stories.