It wasn’t a real dance show. Just our small dance class of five women performing for our husbands and children in the room where we practice every week, but the thought of it filled me with fear.

When we went through the dance routine the week before I felt a burning sensation deep in my gut that quickly spread to my chest, shoulders and face. It was more than anxiety, almost a panic attack.

Although I’m a worrier I never experienced anxiety and realized what it was until I woke up one night a few weeks ago awash in fear. Until this year I lived in denial. I presented myself as a strong, independent woman, the kind of person who could do anything and never acknowledged fear, worry and anxiety even to myself. I kept it a secret because I was ashamed of being weak.

I can’t remember what terror had gripped me while I slept now. Maybe the worry that I’d miss an important appointment, maybe it was the feeling that I was failing at life or maybe it was the thought of the dance show.

Even now I’m reluctant to write about the dance show because it brings up feelings of shame and ridicule. Although the performance is behind me it still raises the fear of performing in front of an audience, the fear of making a fool of myself, being laughed at and looking like an idiot. It seems stupid to think that anyone would want to see me perform anyway.

On the day of the dance show I organised everything so that nothing in my control could go wrong. I had a great dress so I knew that, even though my brain couldn’t remember the dance steps and my body couldn’t execute them fast enough even if it could, I’d look good.

I packed my dress, jewelry and water early in the afternoon and left them in a bag near the door so that I wouldn’t forget anything as I rushed to the leisure center for the dance show later.

My husband didn’t want to come and I was at once relieved and saddened. At least he wouldn’t be party to my shame but his lack of support seemed to reinforce my suspicions that I was an embarrassment, lacking in some way, that I would mess things up.

My nine year old daughter was mad keen to see me dance though. She talked about it for weeks, counting the sleeps and asking who else would be there. If it hadn’t been for her I would have left the show to the other dancers and stayed home that night.

But Kiara was desperate to see me dance so I wanted to go ahead to please her, although I thought she’d be disappointed when she saw me in action.

My greatest fear was that Kiara, the one person in my life who seems to love me unconditionally, is never embarrassed by me and will still hold my hand in public would now realise how untogether, uncoordinated and uncool I am.

I watched thoughts like this rise and fall for weeks before the dance show, trying not to buy into them or let them control me, reminding myself again and again that they were only thoughts. Just thoughts. Harmless thoughts.

After dinner we grabbed the bag and rushed to the leisure center. All the other women were already wearing their dresses and looking gorgeous so I immediately looked in my bag for my dress only to find it wasn’t there. As organised as I was I’d left home with the wrong bag.

This would have been the perfect time to drop out of the dance show but I had my supporter to perform for. I ran back to the car and drove the 30 minute return journey home to get the dress leaving the other women to do the dance practice I needed so badly.

The moon was full and bright, the evening air warm but I felt empty, dull and cold. Forced to go ahead with something I didn’t want to do.

The anxiety I’d been trying to ignore was coming to the boil now, reaching fever point. I tried to focus on the feel of the steering wheel under my hands and my stomach rising and falling as I breathed.

By the time I got back there was time to run through the dance twice more before the husbands and kids filed in to watch us. There were about 20 people in the audience, all instructed not to laugh.

As we take our places for the dance show a tsunami of fear rushes over me. I would rather skydive than take part in a show like this. I’d rather do a muddy obstacle race, play netball, or even join the women’s soccer team. Anything would be better than dancing in a brightly lit room in front of  real people, although I am glad most of them are strangers who I hope to never see again.

The music starts and I move. A lot of the time I even move in time with the other women. I remember to engage my one fan, locking eyes with Kiara and smiling from time to time as the music pulses and I pace the steps around the room. Kiara smiles back encouragingly.

The dance show only lasts 90 seconds and then it’s over with laughter from the dancers not the audience and I wished we could do it one more time.

Before the show I wanted to apologize in advance to Kiara, to explain that mummy wasn’t as good as the other dancers, couldn’t remember all the moves and couldn’t do some of them. But I didn’t tell her. I didn’t want her to feel anxious about watching me and for her to fear the worst.

I kept my feelings of vulnerability hidden and stayed strong. She’s already been in her own dance show and didn’t seem to have any anxiety about being in the limelight. I hope she never does.

It wasn’t a real dance show but it was a real ordeal. The worst thing is knowing how senseless that anxiety was because I was only performing for a small group of people none of whom would judge me in any way. In fact my dance class mates and our teacher were endlessly warm, encouraging and enthusiastic.

But anxiety isn’t rational. It’s senseless, illogical and stupid. It’s part of me though and it’s not going away so I’ll make room for anxiety but I won’t let it derail me.

Anxiety is an unwanted passenger riding with me through life but it can’t stop me carrying on my merry way. 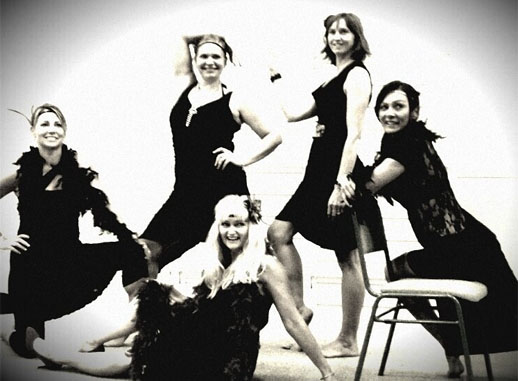 Post performance smiles from the fearless, fabulous, foxy women I dance with on Tuesday nights: (from left to right) our dance teacher Kim, Bec, Tiffany, me and Linda.

How do you deal with anxiety? What have you done this year that made you feel anxious?

More About the 52 Exercises Quest

It’s nearly over! The dance show was the 51st exercise I’ve done this year, an extension of my jazz dance class with the added pressure of performing in front of an audience.

Check out more stories from the 52 Exercise quest now.