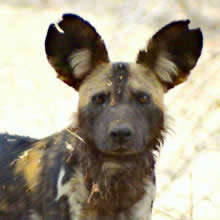 A knowledgeable bush guide takes wildlife viewing to another level and one of the things I loved about my stay at Kanga Camp was how excited all the guides got about spotting the animals. Even though the sight of an elephant, a lion or even a a leopard must be pretty common place to them I got the sense that my guides were as thrilled as me to see the wildlife.

Nothing excited the guides more than a sighting of the African painted dogs and when we saw the Kanga pack come into camp one night bringing the pups down for a drink at the waterhole everyone was thrilled. The puppies were so playful and bouncy I fell in love with them straight away even though I’m more of a cat person.

That painted dog sighting was so brief because the pack moved through camp fast but a few days later while Kanga camp guide Sean and I were driving close to the Zambezi River we got a tip from another guide that there was a pack of painted dogs resting in the bushes nearby.

Sean was practically glowing with excitement as we stopped the safari truck and stalked through the bushes to the place where they’d last been seen.

The painted dogs were only about 150 meters from the road so it was a very short game walk but you’d never have known they were there unless you knew they were there.

Their markings are so delicate and beautiful blending in perfectly with the fallen brown leaves that litter Mana Pools at the end of the dry seas0n.

Here are the photos and a few facts about painted dogs.

We approached the painted dogs slowly not wanting to disturb them. The dog at the front in the middle of this photo is the watch dog, keeping an eye out for danger while the rest of the pack sleep. Of course she spotted us straight away. 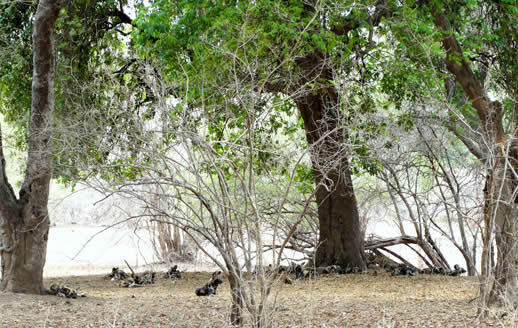 Painted dog fact #2 No two wild dogs have the same markings, which makes them easily identifiable as individuals.

As we got closer the dogs stood up to check us out. 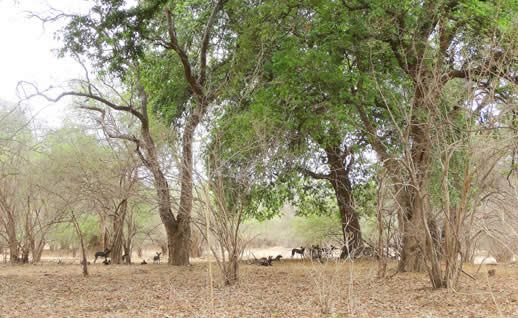 We sat down at a good distance from the painted dogs and they got used to us, slowly going back to dozing and playing. 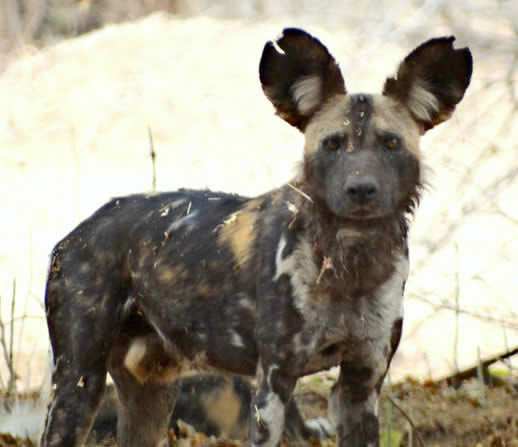 Painted dog fact #4 – All the painted dogs have big, rounded ears which can get ripped and tattered from fighting.

We spotted a small group of puppies on the left of the pack. 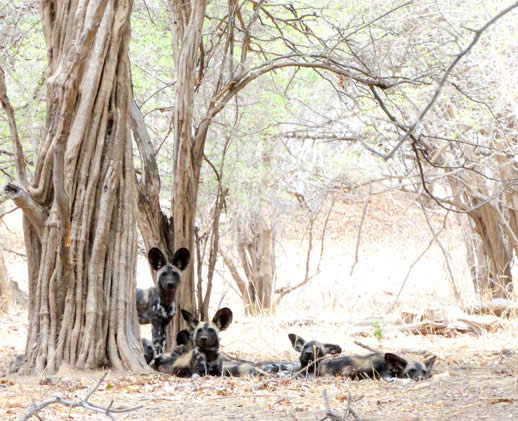 Painted dog fact #5 – African painted dogs live in packs that are usually dominated by a monogamous breeding pair. The female has a litter of 2 to 20 pups, which are cared for by the entire pack. Like other dogs, African painted dogs are highly social, communicating with each other by vocalisations, movements and touch.

Because they’re always active and interacting with each other the painted dogs are fascinating to watch. 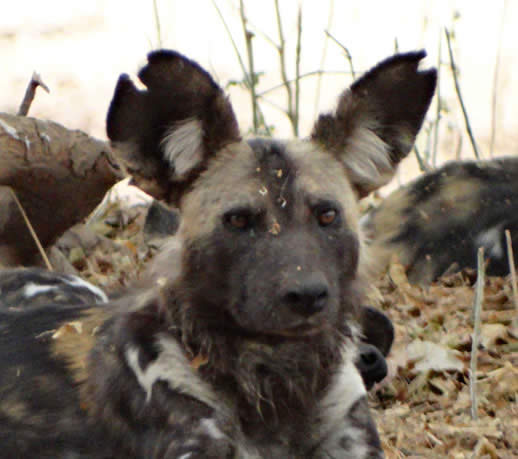 Painted dog fact #6 – African Wild Dog cubs are born in the den and leave the den at between two and three months old.

Sean thought these pups are probably about four months old. Just look at the size of their ears. 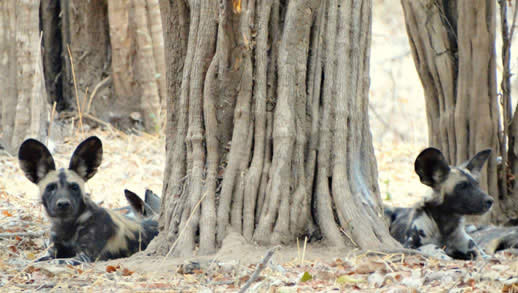 Painted dog fact #7 –  African wild dogs hunt as a pack and are formidable hunters. They hunt antelopes and even larger animals like wildebeest if they are old, sick or injured.

We watched an adult dog come to check that the puppies were okay. 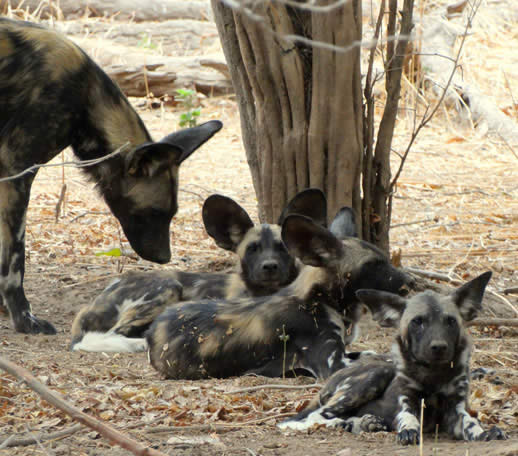 But the dogs are always half away, listening and watching. 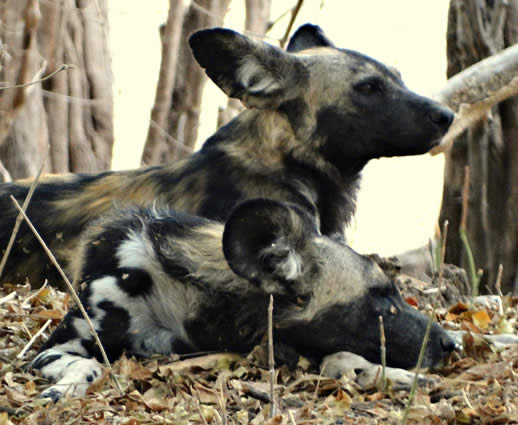 The adults teach the pups all the skills they need to survive in the wild and learn to be Africa’s best hunter. 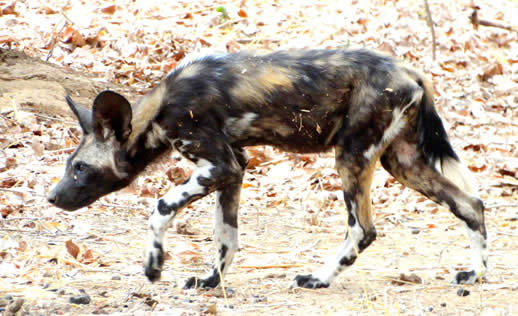 Painted dog fact #11 – Although once considered a pest because they hunted cattle, the African painted dog has become a symbol of pride in Zimbabwe. Thanks to efforts by local communities, researchers and conservationists the population of African wild dogs in Zimbabwe has almost doubled in recent years. 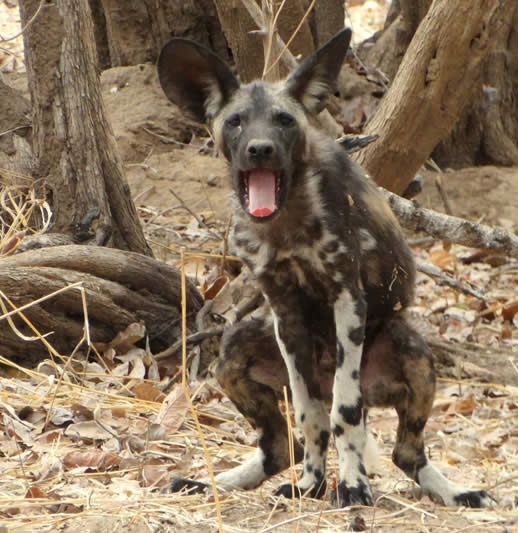 Have you heard of painted dogs before or seen them?

Brilliant post, Annabel – great pics from a great part of the world. I’m patron of a hard working charity based in Perth called Painted Dog Conservation Inc which raises money to support in-situ painted (wild) dog conservation projects in Africa. They do a great job.

My last Painted Dog sighting was near my house in South Africa – a pack of five were hunting impala while we watched while having sundowners!

Love that you are doing your part to help save the painted dogs and that you get to see them close to your home – that must be amazing.

With those ears they look like mickey mouse from far away :) They seems tough but not dangerous. Can they attack humans?

Lol they do too. I haven’t heard any reports of them attacking humans. I think there’s so much wildlife round Mana Pools that there are plenty if antelope etc for them to feed on.

Hey Annabel, hope you are doing great. It seems you are on the african safari now. I am amazed by the second fact about the identification of a particular dog.. great!
Do they attack human? If yes, I am afraid to visit this place..:)

I’m home safely now. I don’t think painted dogs are dangerous to humans – but you wouldn’t want to be an impala :)

This is great Annabel! For anyone who wants to learn even more, please visit our website. Our aims are to raise awareness of this amazing species and to raise funds for their conservation by organisations like Painted Dog Conservation, who work in the Mana Pools area.

Previous post: I thought I’d Never Change… But I Finally Did

Next post: My 7 Resolutions for Body, Mind and Soul