The grass is brown, the ground is dusty and the trees in the Croton forest are bare. Grey branches reaching up like claws against a blue sky. It’s the end of the dry season in Zimbabwe and here in Mana Pools National Park the temperature hovers over 40°C in the daytime but the nights are cool.

When we leave Kanga Camp at 6am some of the guests are wearing jackets in the fresh morning air. It’s a 20 kilometer (12 mile) drive from Kanga Camp to the Zambezi River but our first stop is Long Pool, one of four pools from which Mana Pools gets its name with Mana meaning four in Shona, the local tribal language.

Our open-sided game vehicle bumps through this world heritage site over dusty roads, overgrown with trees on either side and home to endless wildlife. We see warthog, zebra and elephant on the way and impala and baboons are everywhere.

An hour later we’re at Long Pool where we pile out of the vehicle and stretch our legs again. Mana Pools is the only National Park in Zimbabwe where visitors are allowed to walk around without a guide but we’re glad to have two bush guides with us today. Nyenge and Reggie are both Shona conservationists who love the bush and its wildlife, flora and fauna.

They carry rifles as a safety precaution because you never know what could be lurking behind a bush but the spot they’ve chosen for our game walk is relatively open so we should be able to avoid close and potentially dangerous encounters with buffalo, lion or elephant.

We walk in single file and Nyenge takes the lead with the five guests sandwiched in the middle and Reggie following behind. As well as keeping us safe the guides are patient teachers and great storytellers.

Long Pool is home to hippopotamus, Nile crocodile and a dazzling array of bird-life. Impala and other animals come here to drink, taking turns to lower their heads to drink and keep watch for predators creeping up on them from behind. When food and water are scarce grass eaters get hungry and weak. The predators are out in force and the prey are constantly alert and twitchy.

Even if there are no threats on the land a crocodile could grab an impala at any moment. Nile crocodiles can pounce on prey up to two body lengths away from them and with some crocs measuring up to 14 feet long we’re careful not to get too close to the water’s edge.

We don’t walk far because we’re too busy taking photos, listening and learning. A saddle-billed stork reflected in the still water makes a pretty picture, the sounds of hippos snorting, splashing and sloshing grab our attention and the smell of wet mud and dung fills our nostrils. Every track in the dust, every piece of dung, every tree has its own story to tell.

Nyenge blows on the dust to show us a lion ant and explains that most termite mounds are built around trees because the roots and branches make it difficult for aardvark to dig to the center and penetrate the royal chamber.

Nyenge knows the bush inside out and while he takes his job of protecting us seriously he’s playful too. We come across a heap of fresh elephant dung which he cracks open, plunges his fingers in and licks saying that will tell him if the elephant is male or female. Our faces scrunch up in horror but of course it’s a joke; he switched fingers with sleight of hand to rival any magician.

By 9am it’s getting hot and we’re ready to get out of the sun. We loop back to the jeep and drive on for morning tea at the Zambezi River. On the way there a big bull elephant, his back legs angled out for maximum reach, is stretching up into the tree tops looking for fresh leaves. Reggie tells us this big guy probably used to be able to balance on his two back legs to reach the higher branches but he’s getting old now and not so acrobatic.

The mighty Zambezi River is low and wide, pale blue, almost lavender, reflecting the purple mountains of the Zambian Escarpment on the opposite bank. The Zambezi is a whole ecosystem within itself, teeming with fish, crocodiles and hippo, carrying water and a lifeline to the wildlife.

We spot buffalo and elephants on distant islands, fish eagles soaring overhead and kingfishers resting on branches over the riverbank.

As the guides prepare tea and cake we take more photos, then more and still more. It’s a magical moment in a magical day but every day unfolds like this in magical Mana Pools. 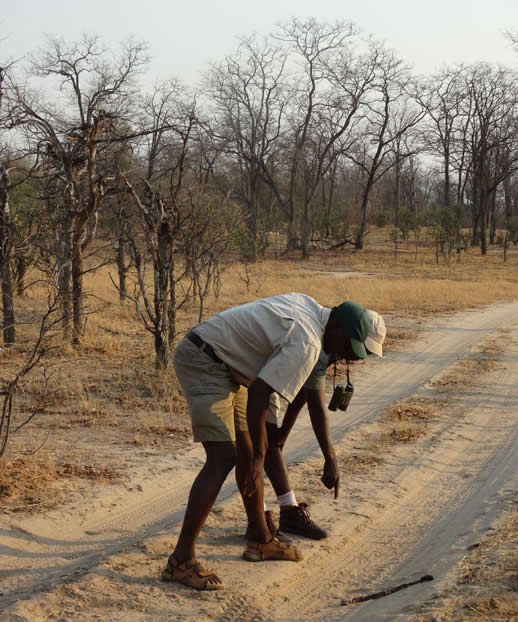 On the way to Long Pool we stopped to study an exceedingly long porcupine poo which caught the guide’s attention – poor guy – they said he must have been terribly constipated! 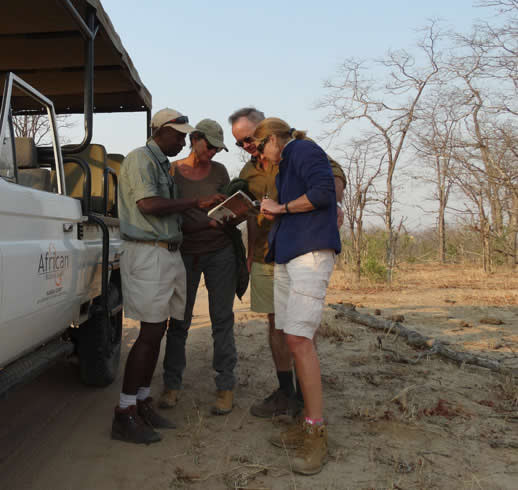 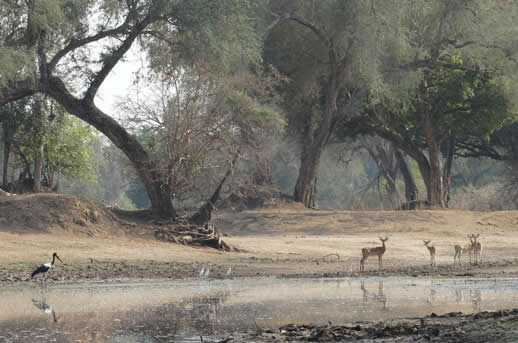 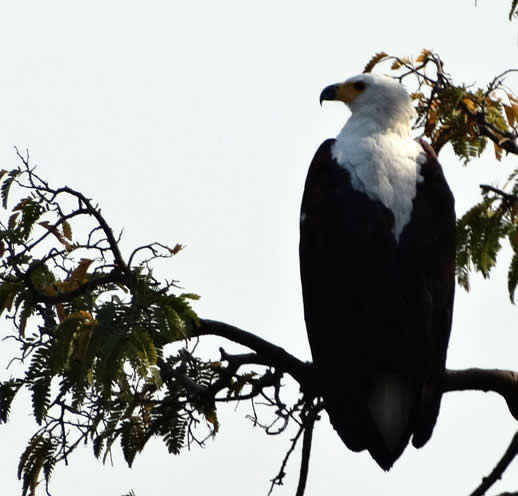 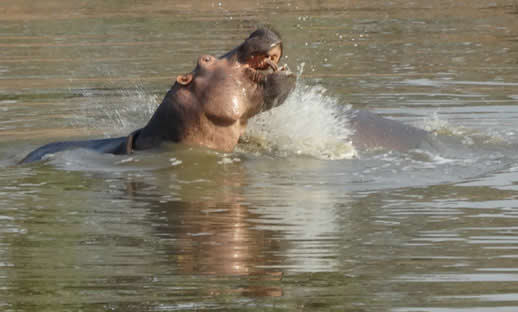 Hippo versus hippo in Long Pool 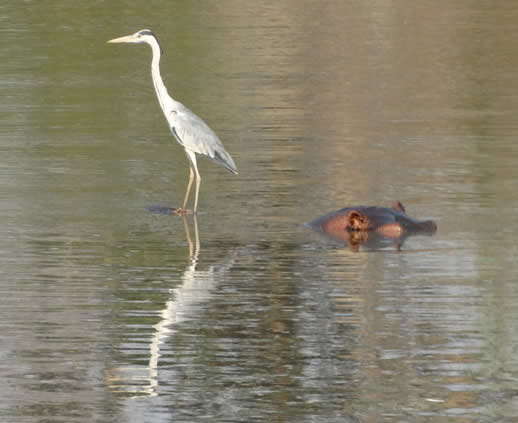 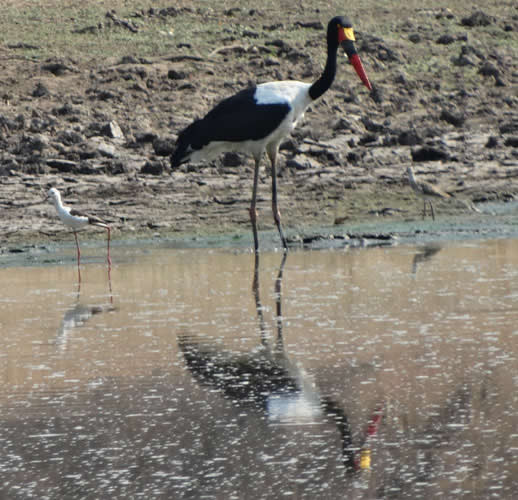 Saddle-billed stork and friends patrol the banks of Long Pool 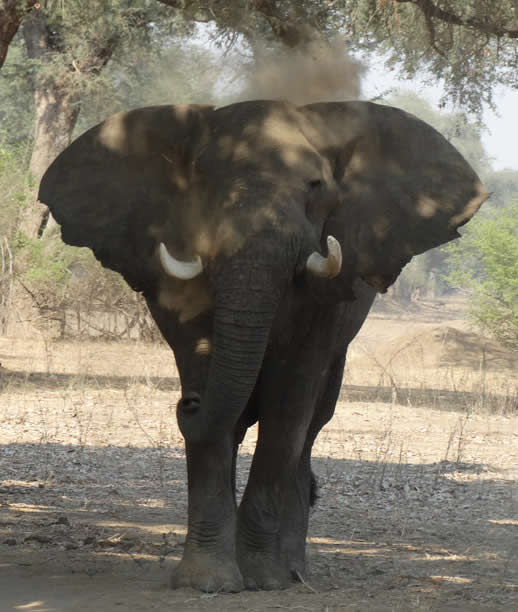 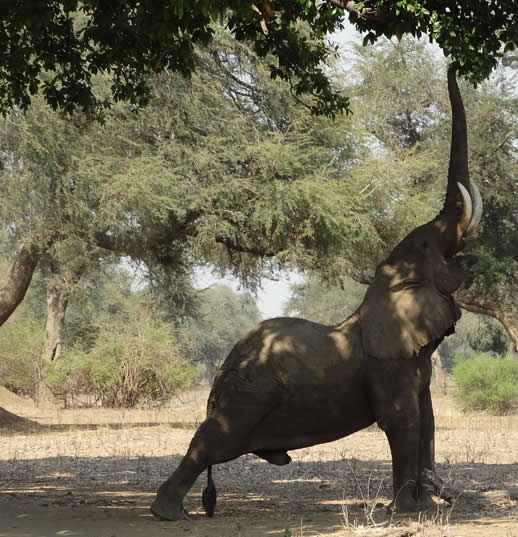 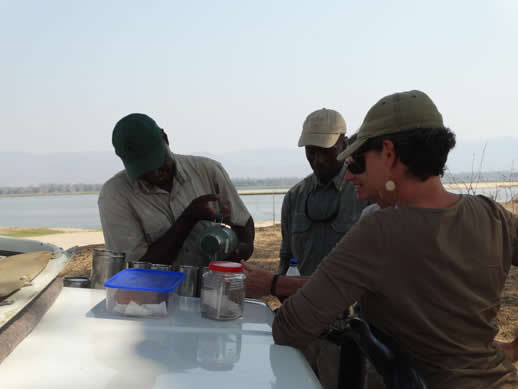 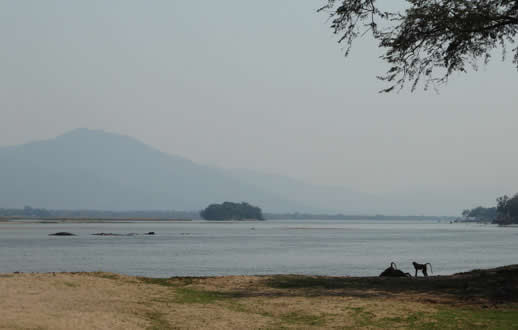 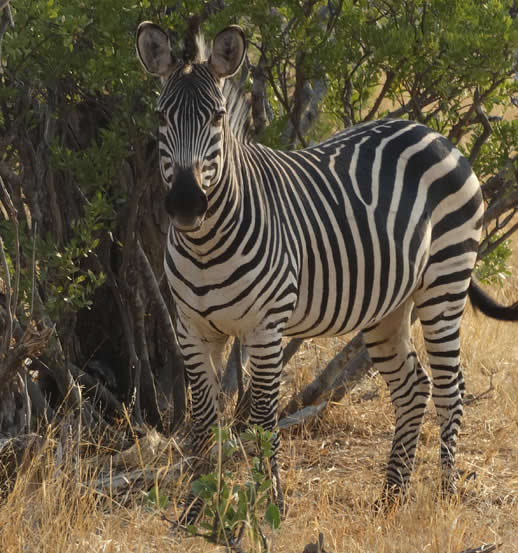 A zebra watches us drive back to Kanga Camp 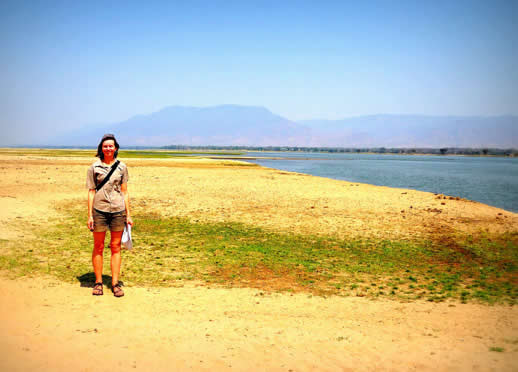 Would you go for a game walk in Mana Pools which is often called Africa’s wildest wildlife park?

I was a guest of Zimbabwe Tourism Authority during my stay in Zimbabwe and of African Bush Camps during my stay at Kanga Camp in Mana Pools. African Bush Camps have high end camps offering a personal and unique experiences in Zimbabwe’s two best national parks. Mana Pools, which is my personal favorite, and Hwange National Park which is handy for visits to Victoria Falls.

My trip to Kanga Camp was facilitated by Matt at Zimbabwe Bookers, the definitive online accommodation finder for Zimbabwe.

This is exercise #45 of the 52 Exercises Quest.

Join Thousands of HOT Readers with the Free Weekly Newsletter

Are you a travel lover who’d like to make sure your later years are filled with adventure, fun and curiosity? Click here to subscribe now for free weekly email updates from Get In the Hot Spot.