You’ve seen Las Vegas in a hundred movies and you’ve read about it in countless magazines but nothing can prepare you for the experience of actually being there.

A few years back I went to Blogworld in Las Vegas for business. Okay, that’s a fib. As a born again blogger I was keen to go to the biggest and best blogging conference in the world, but in truth I also wanted to visit Las Vegas quite badly.

It’s not like I hadn’t been to the States before either. In fact I’ve visited the USA many times over the last 25 years, and even lived there twice, but I had never, ever been to Las Vegas and that felt wrong.

Tacky, tawdry and totally OTT it may be but I wanted to see Las Vegas before I die.

There’s a lot for a country girl like me to soak up in Las Vegas. The Mandalay Bay Resort Hotel where I stayed probably holds more people than the whole 4.8 square mile (12.5 km²) area I live in. In Noosa we have just two sets of traffic lights but Las Vegas is a sea of neon signs, flashing lights and shooting laser beams. I wandered round lost with my mouth gaping for six days. 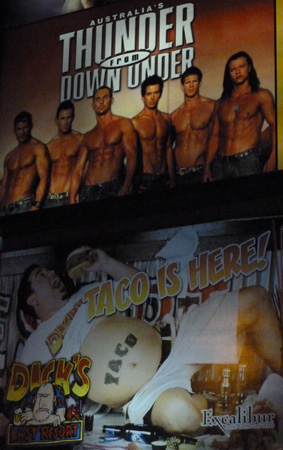 I didn’t eat at Dick’s Last Resort – the restaurant advertised here but I like the way they paired Fat Dick with the buffed boys of Thunder From Down Under in the photo of a billboard above. Nice juxtaposition.

Juxtapositions like that are what makes Las Vegas well, Vegas. Take the side by side offerings of as much as you can eat buffets with the surgically enhanced beautiful people, the families who come to see shows with the party animals who come to get trashed and the hardcore gamblers with the wannabe poker stars like me.

Then there are the ‘only in Vegas’ gamblers who come purely for a flutter, whether they want to plop their money quarter by quarter into the slot machines, or bet the lot on one turn of the roulette wheel.

One morning I met a man who told me I was a fool paying for the hotel’s buffet breakfast. He bragged that he got to eat free as he’d been gambling. When quizzed he admitted he’d lost $1,000 so far which seemed like an expensive breakkie to me.

Luckily, there are plenty of other things to do in Vegas apart from just gambling.

Most importantly you cannot go to Las Vegas without running into Elvis, especially if you’re a long-time Elvis fan like me. And of course you cannot think about Las Vegas and Elvis without thinking about how great it would be to have a Las Vegas wedding.

Alas I was already married when I visited Las Vegas so I couldn’t grab a nearby stranger and force him into wedlock with me as that would be bigamy. You can call me many things but bigamist isn’t one of them.

So, while I really, really, really wanted to follow in the misguided footsteps of people like Britney Spears, Angelina Jolie and even Elvis and Priscilla themselves, I couldn’t even renew my wedding vows as my husband didn’t come to Vegas with me.

Fortunately I got to do the next best thing there is to do in Las Vegas apart from have yourself an Elvis: go to an Elvis wedding. 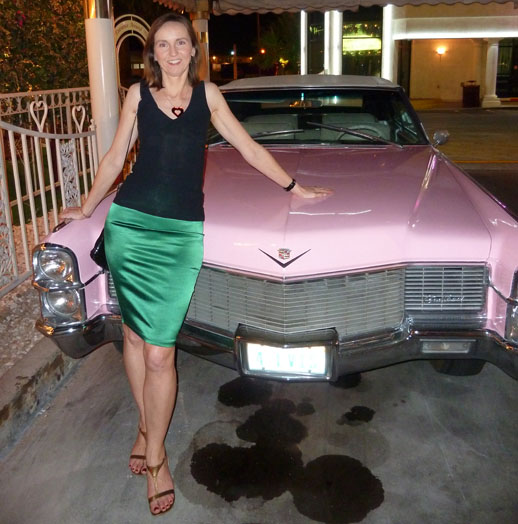 Me and the pink Cadillac outside The Little White Wedding Chapel

Elvis Presley is very much alive and well in Las Vegas. I saw him four times and he still looks and sound great. Apart from the Elvis wedding I also went to a karaoke hall where a couple of former Elvis impersonators, now gone to seed, were still having the time of their lives crooning away to some good old Elvis tracks.

Then there was another old guy with an exceedingly large quiff who I asked if he was an Elvis impersonator:

You could have fooled me.

“Vegas is Disneyland for grown ups.”

Las Vegas – what can I say? It’s definitely a travel experience that has to be seen to be believed. 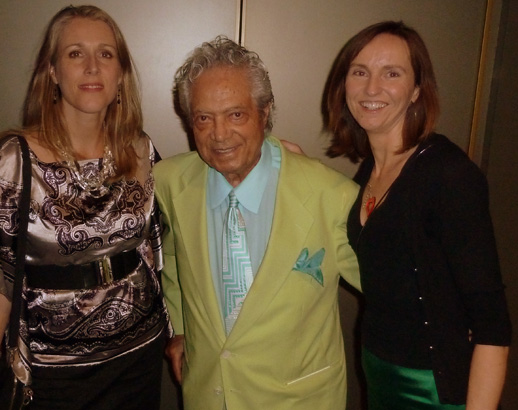 This post was commissioned by Casino Top 10 which is a guide to online casinos. I have an addictive personality so I tend to steer clear of such things but if you’re into a bit of responsible gambling and fancy a flutter check them out. Even if you’re not interested in casinos or gambling their entertainment section, including celebrity news and gossip, is fun if you want to see what your Hollywood friends have been getting up to of late.

Have you been to Las Vegas? Did you love it or hate it? What’s the best thing you did in Las Vegas?