Word seems to be getting out about my running away skills, how I regularly want to disappear and often pull off a great escape.

I often get invited on press trips which I love but a few weeks ago I was contacted by a casting agent in the USA who invited me to participate in a “Swiss Family Robinson’ reality TV show.

It sounded like a fabulous desert island experience to me. We spoke on Skype and the casting agent explained that:

She had me from the word go but hearing I’d get paid and could choose an island anywhere in the world sent me into a frenzy of desire.

I was a bit worried about a general lack of handyman skills in the Candy family (we’re more of the geeky type) but Max aged 13 can shin coconut trees and I’m willing to get my hands dirty so it sounded like a fun experiment.

Unfortunately my husband and 16 year old son weren’t so keen. Rich, who is clearly way more grounded and responsible than I am, mentioned that our business would fold if we left it unattended for 12 weeks.

As an introvert I’m not thrilled by the idea of a film crew either and, since my experiences filming a travel show, I  know exactly how intrusive and time-consuming making a TV show is.

Still, since I don’t watch TV, I’m not bothered about appearing on TV.

More importantly because I love travel, running away and disappearing I’d be prepared to put up with filming in exchange for an amazing desert island experience.

Alas not everyone in my family agreed so I can’t go. I was sad for a few days and there are a few lingering regrets but I’m almost over it now because I believe that, although this travel opportunity wasn’t quite right, others will come up.

The important thing is to be open to all opportunities and ideas then, when the right travel opportunity comes up, be decisive and act fast.

No sooner had I emailed the casting company to tell them with regret I couldn’t join the reality show than another US casting agent called me and invited me to take part in a different TV show, this one a documentary.

Apparently remote Pitcairn Island in the pacific is currently offering free land to homesteaders who move there and this film maker is trying to find people who are interested in moving there. She wants to film the adventure and follow their journey building shelter and gathering food.

No payment was mentioned and Pitcairn Island, a tiny community of fewer than 100 people, got bad press in 20o4, when six Pitcairn leaders were convicted of sexual abuse against girls as young as five, so I wasn’t really interested in that opportunity.

Still, it all goes to show that if you put yourself out there and make your travel dreams known they do come true.

I’ve already visited a few of my dream destinations including Zimbabwe, Italy, Spain, Japan and Uluru based purely on my love of travel and sharing that on this blog. It’s my passion for travel, writing and the desire to share that which brings me these invitations.

I never know where I’ll be going next but I’m always ready for when the next great opportunity comes along. Because I love running away even more now I have a home to come back to afterwards. 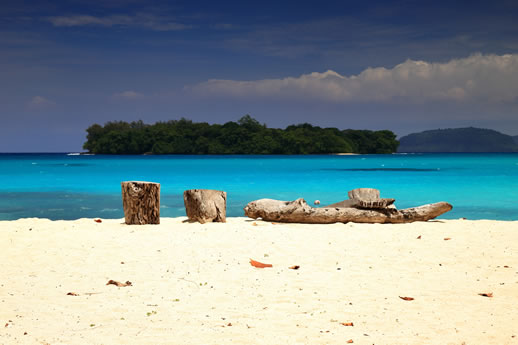 Would you like a desert island experience? With or without film crew?

If any of you are genuinely interested in these desert island experience opportunities leave a comment below. I can put you in touch with the right people.

Wow! What an incredible opportunity. I’d love that. Do you get to bring your own supplies or are you dumped on the island, without anything? (Fresh water would be a challenge & hurricanes if you are in the Caribbean.) I can understand the wanting to go home later though, and after following several eternal digital nomads this past year, I wonder what happens when they get homesick, but have no home. (You always need somewhere to recover, lick the wounds & regroup!) My daughter’s favorite phrase is “Let’s go home now” when she has had enough.

That’s what I thought! They’d have to give them water if there wasn’t any on the island. I agree, it’s lovely to come home after a travel adventure :)

Hello, I must say that I’d never enjoy having a film crew around. Since I used to work in TV, I know just how intrusive I used to be!! However, you are so right about seizing opportunities and the moment. I say this having just packed a bag to go to Fiji tomorrow. Do you think four cameras plus phone will be ebough? Where’s my elec adaptor??!!

Woo hoo! Sounds like you have your own desert island experience all organised :) Can’t wait to see the photos!

Oh my word- that’s a fantastic offer Annabel! What an opportunity but definitely one I think I would also have to pass up. I think I’ve watched too much “Survivor” to objectively think it would be a truly wonderous experience but probably more like hitting your head with a coconut, repeatedly.

However, I’m with you in the wanting to run away to a tropical deserted island- I’ve been looking at packages for my little family for a Fijian escape (very jealous Seana!) and the idea of a deserted atoll with a bit of greenery on it sounds lovely at the moment. I’m just waiting for the right package (or opportunity) to present itself and I too am going to pounce!

Well just receiving those ‘out of the blue’ opportunities are an adventure in itself. It never ceases to amaze me how many experiences seems to just find you, I think it’s lovely to know someone is reading/listening…even if their offers are not a great fit. Look forward to your next instalment which I am sure is just around the corner? X

Count me in! I want to live on a tropical, deserted island (without the film crew)! This is something my husband and I dream of!!!

I run a small travel agency, and have been enjoying your blogs (as I’d like to have a successful blog too) and traveling and helping others reach their vacation dreams is sooo my passion!!

Previous post: Running for Beginners Over 40: for the One Healthy Move Series