How to Stay Married When Travel is Your First Love

We met in Egypt, dated in England, slept together in Amsterdam, got serious in Africa, were separated in Laos, moved in together in Paris, had children in New Zealand, married in Vanuatu, started over again in Costa Rica and grew middle-aged together in Australia.

That’s our love story in 44 words, a relationship that’s spanned 22 years and as many countries.

Candlelit dinners are a distant memory, he’s only given me flowers once unprompted and it took us 14 years and three children to tie the knot. But it turns out that candlelit dinners, flowers and white weddings aren’t the key ingredients for a long and happy marriage.

Here’s how we’ve stayed married and built a relationship that spans the years as well as the continents.

1. Be realistic not romantic

There are a myriad times when Rich and I could have parted ways. In the beginning because I was too young and clueless and he was just ending a long-term relationship. Then later because of the pressure of having children and my depression. And now because it would be so easy, easier than staying together.

When people ask how The Mucho Man and I are getting on I tell them we haven’t killed each other yet. It’s not that there isn’t any love between us, we just don’t show it. You won’t see us holding hands, hugging or kissing. Some days, even though we work from home and spend all day in the same house together, we barely even talk expect to delegate chores that keep the household running smoothly.

“Can you pick Max up from art class today?” I’ll ask.

“Will you fill up the car when you go out?” he’ll counter.

Neither of us says please. I remind myself to say thank you sometimes for all the things he does for me which I take for granted.

There have been moments when I wanted to leave him: the time he gave me a magazine for my birthday and that time during couples counselling when he failed to recall one single thing that he’d ever found attractive in me still bother me. But somehow we’ve stuck together even though decades of monogamy lacks the excitement of make ups and break ups and the Internet dating adventures which I enjoy vicariously through my friends.

I’ve only slept with six men and two of those were so hopelessly inept and socially moronic that it was a one-off experience. Last year the Mucho Man turned 50 and that depressed me more than him because I never imagined that I’d end up married to a portly fifty year old.

Then I noticed that, even though I’m the only person who’s cut his hair for the last 15 years, and I’ve never ever seen him work out, I still find him good-looking. I still want to spend time with him even if we don’t have much to say and his ageing I hate but what it represents: a heart attack waiting to happen and the life of emptiness ahead of me when he is gone.

But we don’t talk about that.

Our love has evolved into practical divisions of tasks. I cook and he washes up. I take the kids to early morning activities on Saturday while he has a lie in before doing some housework. I plan our daily and future lives while he takes care of our finances so, if our lives are long, we can grow old in reasonable comfort.

Sometimes when I’m feeling most loving I let him ramble on about real estate prices and the global economy, or join him on the sofa to watch one of the documentaries he loves. And he humors me occasionally by letting me talk about blogging or my latest travel plans, even though he doesn’t have the same drive to keep traveling and exploring that I do.

Occasionally, with minimal promoting, he notices I’m wearing a new dress and says I look nice without asking how much it cost.

Our relationship grew stronger last year because I went away so much. He says running the house and taking care of the children is easier when I’m not there but I know he misses me really. Just like I miss him when he takes the kids camping and leaves me home alone. But only on the last day.

I was keeping a diary when we met in Egypt but he didn’t impress me much to begin with nor I him. Maybe we weren’t that impressive alone but together, after all our travels and travails, we’ve evolved into something a little bit special. 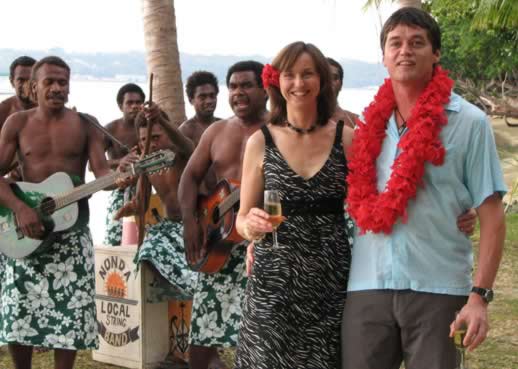 What’s your little tip on how to stay married?