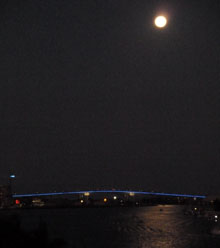 One Night in Brisbane

Could you use a night off? Would you enjoy 24 hours off from the kids, the household chores and the lists of things you should be doing?

Me too and, thanks to a strange traveler, I just got the chance to spend a night in Brisbane, the capital of Queensland and Australia’s third biggest city after Sydney and Melbourne.

Not quite one night in Bangkok, where I once spent more like 100 nights, but still great excitement for a country mouse like me.

Even though my home’s a 90 minute drive from Brisbane, I’ve only been there a few times in the two years I’ve lived in Australia. Once to get my shipped goods cleared by customs, once to show my mum round and once for a tweet up with some hot Aussie bloggers. Sad isn’t it?

But due to a happy turn of circumstances, and the aforementioned strange traveler (who turned out to be an angel, read more here) I recently spent one whole night in Brisbane with the Mucho Man (my hubby, check him out here). We were lucky that our kids could stay at home in the care of someone we’d only met the week before, but who rapidly become an honorary and favorite family member.

After checking in to the Riverview Hotel (I’ll do a mini hotel review in a later post), then immediately checking out of one room, and into a better room with the promised Brisbane River view, we hopped straight back in the car to explore.

We wanted to visit Fortitude Valley or “The Valley” as locals call it. Fortitude Valley is one of those areas all cities have which used to be seedy and run down, but is now hip and happening.

We nosed around a little market, read a lot of menus in eager anticipation of eating out and observed people from all walks of life. I guess I’m sheltered living in Noosa, but it’s amazing how many different people in all shapes and favoring all fashion styles live in the city.

Brisbane really has that gritty city feel you  just don’t get in a chi chi holiday resort like Noosa and that’s fun.

Next we zipped off to the Queen Street Mall in down town Brisbane where I did a bit of window shopping (or window licking as the French call it) while the Mucho Man had a beer and watched the world go by.

Then we nipped back to the hotel to get changed and catch the full moon rising over the Brisbane River and the big blue bridge.

We got lost a few times driving round.

Brisbane has one of those one way road systems which makes navigating tricky, but despite that we only went the wrong way down a one way street once. A bit hairy as it had four lanes, but luckily we did a quick u-turn and sped off before anyone was the wiser.

The Mucho Man claims we almost died when he realized we were about to get on the motorway then quickly swung over across two lanes, narrowly avoiding a concrete wall, before getting us back on course.

I missed that bit as I was too busy trying to work out where we were on his new smart phone. It’s still a mystery to me.

After all that excitement we thought it best to chill out at the cinema. There’s not much on at the moment but Jane Eyre worked a treat even though my brother scoffed:

“How many versions of that are they going to make?”

But the Mucho Man, revealing a rare gap in his education, didn’t know the Jane Eyre story and I loved this latest film version. So moody, romantic and moving, it’s a perfect date movie.

Finally it was supper time and we were starving as it was 8.30pm and normally we eat at 5.30 pm with the kids. Now that’s not just sad, it’s tragic.

But we zipped back to the Fortitude Valley for a Malaysian meal which deserves its own blog post (coming soon!)

We were so stuffed afterwards we had to go straight back to the hotel for a wee lie down.

Before we knew it morning had come so we missed out on all the partying opportunities on offer in the Fortitude Valley, but we’re probably a bit over all that anyway.

Now that would never have happened when we were in Bangkok.

After breakkie we zipped over the Brisbane River to the South Bank where we strolled along the river front walk, dipped into two art galleries, catching a short and very surreal surrealist film, then browsed the Sunday lifestyle market.

All morning we were marveling about what a great city Brisbane is and how we must visit more often.

Heck, maybe next time we’ll even bring the kids. They’re keen to come but we’re not so sure.

Those 24 hours kid free time were fabulous and one night in Brisbane would be quite different with the Candy kids in tow. 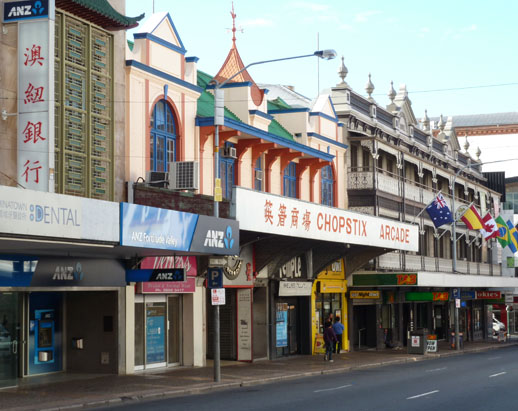 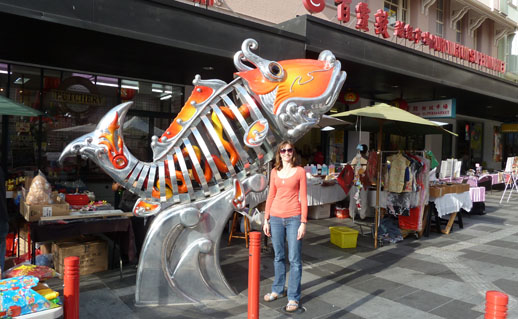 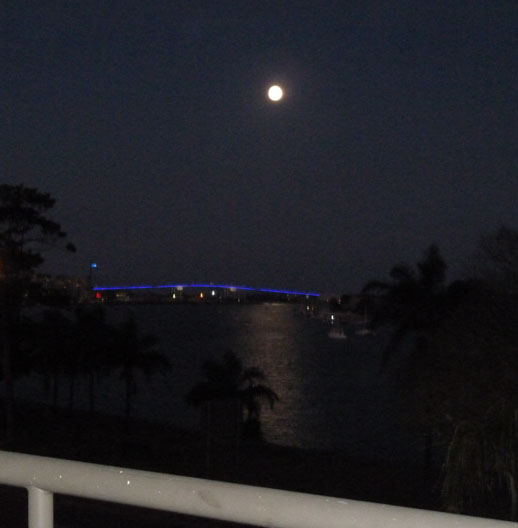 The view from our hotel balcony 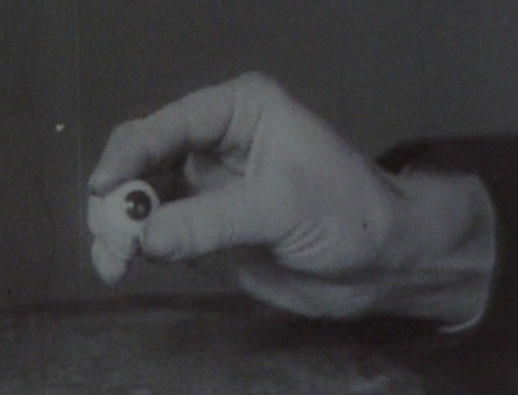 The Savage Eye film is so weird and wacky it's compulsive viewing. See it at the surrealism exhibition at The Queensland Modern Art Gallery until 2 Oct, 2011 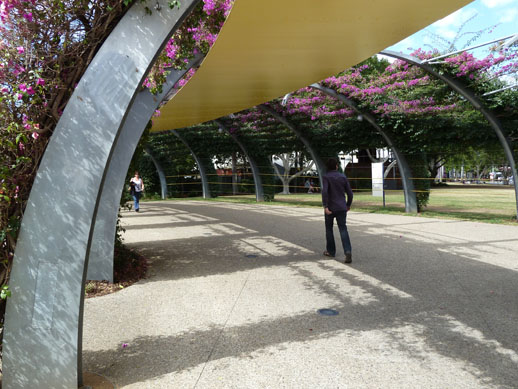 So glad you enjoyed your visit to Brisbane, Annabel.

Have you tried the CityCats yet? A fascinating view from a different perspective – I love taking our grandkids for at least a short time when they visit.

Come again soon, and tell us more of your discoveries.

Hi Desolie, we didn’t manage to squeeze in a boat trip this time but I did that with my mum last time. Such a great way to get around the City – and less stressful than driving!

Your shot of the full moon over a bridge on the Brisbane River is remarkable. For one year, our American son studied engineering abroad (AustraLearn) at the University of Queensland in Brisbane and the University of Melbourne. Unfortunately, we were not able to visit him in Australia.

While at UQ Brisbane, he was very impressed with the Brisbane River water ferry (CityCat) transportation system. There is a ferry dock at the UQ campus. He once took us on a real time virtual CityCat river ferry ride (using his cellphone video camera) as he made a quick 10 minute run down river to a dock downtown Brisbane. Thrills in California for us, ON THE OTHER SIDE OF ANOTHER HEMISPHERE

Hi QwkDrw, thank you:) I couldn’t believe it when I got back to my hotel and saw that. That’s brilliant you still remember your virtual tour of Brisbane. Amazing what we can do with technology these days! So happy to see you here again!

Hi Sally, I wouldn’t be complaining:)

What a great getaway. And what a nice looking guy! I’ve only been to the other side of the island once in the last year. A little more than 90 minutes away, but not to much further. It’s easy to get into our routines. Glad you got this fun break from yours. Kids free too!

Hi Sandra, oh that’s funny. When we lived on Waiheke Island in New Zealand we only went to the “bottom end” (a 40 min drive) once a year. it was gorgeous too, every time we went we said we must go more often!

Isn’t it amazing just what you can fit into 24hours when away from the day-to-day? I’m always left bewildered why can’t I fit in ‘that’ much everyday?

Such fun doing something different –
Roll on the next visitor to release you for the next break away ;)

Hi Linda, I think we’ll explore more next time. Yes, we never do anything on a Sunday normally – a walk on the beach and reading the paper:) Great to get out and about.

Funny how the shorter the visit, the easier it is to write about it – for me, anyway! Maybe packing so much into such a short time heightens the senses in a way that relaxing over a few days or weeks cannot.

Or maybe I’m just being fanciful!! Look forward to your next adventure!

Hi Red, there is truth in that. The longer you stay the more there is to say but you can’t say it all in a 1,000 word blog post!

Home! I live in NY now, but I moved here from Brisbane, and find that thinking about my old city with any accute detail always gives me pangs!

The cosmopolitan shopping, art, restaurants that are popping all over the place, precincts, sporting facilities, and of course, the unparalleled weather is for reason anyone to enjoy an amazing visit!

Thanks for the reminder :)

Hi Aria, great to see you here. You are a long way from home. The Brisbane weather is definitely way better than NY – so cold there in the winter!

Yes, yes, that’s very nice, but where is your Plug Preserve?
http://www.flickr.com/photos/laughingsquid/14397204/in/photostream/

Hmmm. looks like I missed that one – probably for the best!

Beautiful photos! My disdain of flying may forever keep me from visiting Australia, but I’ve learned a lot since I’ve been blogging. We are truly one big worldwide community.
Thanks for sharing your get away!
b

Hi Barbara, well, just in case you never get here I hope you get a sense of it. Even better would be if I can tempt you over!

I am so glad to see photos of Brisbane. I didn’t realize that there were so many Asian restaurants. I think it’s so important to get away from your children once in a while. make it a habit Annabel.

Hi Sonia, thanks:) I do schedule a night off here and there but we usually stay home. Lovely to go somewhere and escape them for longer! Yes, there are heaps of Asians and Asian restaurants in Brisbane – very cosmopolitan:)

Great review, and reminder of how liveable Brissie is. Of course, I am biased. Mind you Noosa is lovely too … I think most of Queensland is awesome.

Hi Bronnie, QLD is incredible – and I’ve probably only explored about 2% of it! Hope to see more soon:) Cape York is calling my name:)

I loved hearing about your adventures in Brisbane. I’m so intrigued by Australia. It’s such a trek from Canada. I’ll get there one day — I hope! In the meantime, I’m enjoying your wonderful blog posts.

Hi Joyce, thanks for the lovely feedback. Canada is one place I haven’t visited but would love to as well so we’re even. I hope you get here and I get there:)

Bookmarked! So I can refer to this post when/if next in Brissie. Have been only briefly, would love to explore much more.