It’s been raining for five consecutive days which makes me irritable. Not because I can’t get out – I keep walking even when it’s raining  which people find weird – but I’m cranky because nothing dries, the house smells mouldy and when I slide into bed the sheets feel damp.

But I shouldn’t whine. My friend Molly from Minneapolis commented on my ice-skating escapades that she’s snowbound. So I thought I’d better put surfing, swimming and other hot weather water sports for my 52 Exercises quest on hold in sympathy with all you in the throes of a northern winter.

Molly mentioned hot yoga keeps her sane in the winter months. The thought of hot yoga leaves me cold but since Molly likes it I’m ready to give it a go. She’s not one of those strange yogini types, she’s a busy mum who’s trying to keep in shape and stay sane like me.

Bikram yoga is billed as the original hot yoga but it’s the only hot yoga we have in my sleepy little town so off I go.

I didn’t know anything about Bikram yoga except you do it in a superheated, humid room. Think sauna.

At the yoga studio there’s a photo of the creator Mr. Bikram wearing a flamboyant Panama hat, sunglasses and a cheesy grin. But I don’t have time to look at it for long because the receptionist is cross I only arrived two minutes before the class starts.

She makes me sign a waiver, sells me some water and sends me into a room where a few other students are already waiting. It’s hot, bright and smells of stale sweat even though they clean the carpet every week.

Then the receptionist appears only it turns out she’s also the yoga teacher. She’s changed into a midriff top and a pair of bikini bottoms with a couple of skirt-like l flaps. She is incredibly bronzed and muscular. If I saw her at the beach I’d think she was a body builder, not a yoga lover.

She softens, welcoming me and other newbies to the class, calling us by name and letting us know it’s okay if we can’t do a pose or fall out of a pose. We learn it’s not a competition and that we’re doing well to get started on our quest for better health.

She explains that the class is based around two breathing exercises which bookend 26 yoga poses then we start performing them in a fast-paced sequence.

It’s strangely challenging and soon the man in front of me has a sweaty butt crack. Before long all of us are sweat-soaked. I’m told not to wipe my face with my towel which “give you spots” but it’s hard to stand there with sweat dripping down my face. It’s like not swatting a fly that lands on your face. I just want to get rid of the sweat.

Most of all I want to lie down with my eyes closed but the teacher is on to me and keeps reminding me to keep my eyes open and shut my mouth.

It’s so brightly lit in there and there’s a halogen light right over my head which I’m convinced is heating me up more than the others.

Soon my body doesn’t just feel hot on the outside. I can feel a burning heat coming from my muscles and bones as if I’m being cooked in the microwave from the inside out.

The teacher tells us to stand still if we feel faint. I rejoice because I don’t. Then I do feel a bit woozy and wonder how many people actually pass out in Bikram yoga sessions.

The teacher’s patter is relentless, not surprisingly because we have to move through so many poses in 90 minutes.

It’s hard to listen, contort my body and try not to faint at the same time. So hard.

“That class was full on.” I tell my daughter when I get home.

“It was hard work. Really hard.”

“I had to stand up with my arms above my head,” I say. Actually that was the easiest pose but it was still hard; the other poses are far too complicated to explain.

“It doesn’t sound that hard.”

I didn’t enjoy the class until it was over but maybe it’s not supposed to be fun. I did like the quotes from Bikram the instructor shared though like:

“Mess with the gods all you please but never ever mess with your knees,” and “90 minutes of pain for 90 years of health”. Kooky and cheesy, maybe like Bikram himself.

But the best quote was credited to a Bikram yoga teacher in Brisbane:

“It’s normal to feel weird but if you feel normal that’s weird.”

Part of the reason I’m doing this 52 exercises quest is to try to fit in with the type of healthy people I want to be more like, to pick up some fit friends to balance out the party animals I’m naturally attracted to. To find a group of people I fit in with despite there being at least 35 ways I don’t fit in.

So I can relate to that quote. I think the Bikram thing is a bit weird but plenty of people think I’m weird. So if it’s normal to feel weird then maybe it’s normal to find other people weird and be weird too. Maybe no one is weird at all.

When I get home a quick Google search post reveals that Bikram yoga is a franchise and its creator, the wealthy, flamboyant, Los Angeles resident Bikram Choudhury has as many haters as he does devotees.

I don’t know who’s right but I liked hearing that it’s okay to feel weird. I like living in a weird world, surrounded by weird people and I’ve got a feeling that we weirdoes make the world a better place. 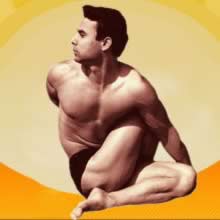 A young Bikran holding a pose – I love this photo but I do not like the photo I’ve seen of him posing on top of a tiger pelt complete with the poor tiger’s head.

Cost: $20 for a one week intro pass – I went to Bikram Yoga Noosa and Kawana who have endless options for passes posted on their website along with the class schedule. So simple and easy and yet so many gyms and sports clubs can’t seem to manage that.

Average Heart Rate: 121 bpm. Totally surprised that it was an aerobic exercise, even though I was barely moving it shows that sometimes just standing still can be the best work out of all.

Peak Heart Rate: 171 bpm. Incredible. Maybe some of that was related to stress and anxiety. My body did not want to work so hard in such hot conditions.

Calories Burned: 382 calories. I thought yoga devotees were slim because they eat healthybut apparently they have another secret weapon too. Yoga burns fuel fast.

Fun Factor: 4/10 – What can I say? I’ll give Bikram another go but I can’t see myself becoming a devotee because it wasn’t much fun.

Fear Factor: 6/10 – There were only seven people in my class so I didn’t have to get too close to any sweaty men which concerned me before going. I did think I was going to pass out a few times though and my body was giving me clear signs that all it wanted to do was lie down and go to sleep. Or run away home.

UPDATE: Just got back from my second Bikram yoga class. Sure enough I was more relaxed and my heart-rate was much lower and more stable. According to the heart-rate monitor I only burnt half the amount of calories though. I like that Bikram yoga is about overcoming pain, facing challenges and pushing yourself but I still didn’t find it much fun.

UPDATE 2: Just got back from my third Bikram yoga class. In just three classes I’ve become more flexible, less judgemental and a better listener. It’s something I could do once a week or now and then when I want a powerful mind and body workout.

If you’re enjoying Get In the Hot Spot and 52 Exercises please take a moment to share this post on Facebook, Twitter, by email or any way you please. You can use the handy buttons below. I really appreciate that. Thank you.

Get the weekly newsletter – If you’d like email updates from Get In the Hot Spot click here to subscribe now. You won’t get an email every time I update the blog but I will try to create a weekly newsletter to tell you about the best stories.

Bikram yoga – or hot yoga – love it or hate it? I’d love to know what you think