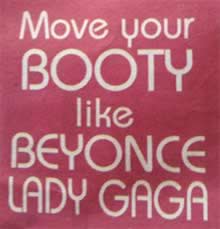 Ridiculous as that may sound to you I was sucked in immediately.

Yes, I confess: I want to learn how to shake my booty like Beyonce and Lady Gaga. Even though I have never seem them shake their booties and even though the word booty has only recently been added to my lexicon.

“Designed for the beginner adult, have fun learning the GENUINE dance choreography from the film clips” the ad continued.

I probably didn’t pay much attention to the last bit about genuine choreography, I just saw three words: ‘adult beginner’ and ‘fun’ and knew I had to try it for my 52 exercises quest.

Of course I know who Beyonce and Lady Gaga are but I’ve never seen one of their music videos so next I googled “booty shaking Beyonce” which showed a sedate live performance where she shook her buns for a few second while the crowd went wild.

The booty shaking seemed achievable and, if that was the reaction I’d get I was keen. Mad keen.

Then I googled “how to shake your booty” to see how hard it was and came across some rather amusing videos in which two transvestites half taught and half mocked booty shaking, along with a few comments from angry women (presumably black women) about how many white women have created YouTube videos teaching people how to shake their booty.

I loved that added controversy and the irony of knowing that the MTV dance class would most likely be filled with white, middle class women who were lusting after being able to shake their booty with as much class (or lack of it) as a downtown ho.

Sadly I don’t own a sequinned one piece corset like Beyonce’s so off I went to the dance class in the same baggy old shorts I wore for soccer.

It all started off well. The teacher was lovely, a not so young mother like all the other women there and I was happy to see a big crowd I could easily hide in. Around 30 women of a certain age (as the French would say) had happily forked out $15 for the opportunity to add booty shaking to their skill set.

For about the first 30 minutes we did some yoga type stretching which I love, especially when combined with pumping music blaring full blast which doesn’t seem to be popular in yoga studios.

Then we moved on to learning the dance moves from the Lady Gaga video for Marry the Night, a song with about 1000 beats per second and a dance routine with about 20 moves in the eight second bit we were trying to learn.

I think it was a bit hard for adult beginners. Or at least this adult beginner. Plus really I didn’t want to learn an entire video dance routine, I just wanted to learn a few moves so next time I hit the dance floor (and I am praying it will happen again) I can bust out my booty shaking and be the talk of the town. Hopefully in a good way, although at this stage in my life people talking about my dancing in any way would be fine.

But we didn’t shake our booty once. Not in the literal way I was hoping for anyway where you just stand still, stick your bum out and jiggle it around as fast as possible.

So it looks as if my booty shaking days are over before they’ve even begun which could be a good thing.

Although I might still practice a bit with those YouTube videos I found because, as ridiculous as it is, if booty shaking is fun and it gets me moving I’m all for it.

Cost: $15 – Or $100 if you signed up for a term which I didn’t because I have to keep trying new things. If you’re in Noosa check out the class at Kirsty and Kester. I might give it another go myself when I’ve got all 52 exercises out of the way.

Peak Heart Rate: 127 bpm but only for a few seconds.

Fear Factor: 6/10 – Lovely, friendly relaxed group and teacher so nothing to fear at all.

Click here for more episodes in the 52 Exercise quest.

If you’re enjoying Get In the Hot Spot and 52 Exercises please take a moment to share this post on Facebook, Twitter, by email or any way you please. You can use the handy dandy buttons below. I really appreciate that. Thank you.

Get the weekly newsletter – If you’d like email updates from Get In the Hot Spot click here to subscribe now. You won’t get an email every time I update the blog but I will try to create a weekly newsletter to tell you about the best stories.

Can  you dance? Do you dance? Are you any good at it? Does it matter? And is there an age deadline for booty shaking?

I am really enjoying your posts..your accounts make me giggle, I empathise with you and I admire your courage..keep going it’s getting better and better!

Thank you for the wonderful feedback :) I’m sticking with it and so glad you’re here to share the journey.

So funny Annabel. The thought of doing a bottom jiggling dance class would terrify me. A good reason to do one!!

Here’s to your next dancing extravaganza!

My fear factor is going down every week – beating fear by facing fear again and again is the best therapy :)

This one sounds fun! I’m still trying to find a Zumba class I can pay as I go and not have to join a club. I’ve burned more money at health clubs than I care to remember. I’ll maybe look into buying a Zumba video.
Thanks for keeping this going. It’s fun to read your adventures in exercise!
b

You can find heaps of great videos on YouTube too :) And there are always exercise DVDs going cheap at garage sales or you can borrow them from your library.

Annabel, for fantastic music and simple lessons in how to shake your booty as well as lots of other parts of your anatomy you just have to give zumba a go. And if you can’t find a pay as you go class in Australia you might want to come over to Rarotonga where there are classes by different instructors five days a week for the princely sum of NZ$2 a time! And at may age (68) where else could I go to shed inhibitions and leap around to funky pop songs (I love those) and lots of latin beats (not so keen on them because I don’t know the words so I can’t sing along).

You are an inspiration – and I want to come to Rarotonga right now! Go Penelope :)

I teach a class at my local gym very similar. I have ladies from older teens up into their 60s coming and learning to pop, drop and shake. It’s been such a pleasure to work up choreo and share it each week. I have video on my website if you wanna try it out. It’s important to have fun when you work out and not get too serious. We turn the lights out in my class and have disco lights that come on so everyone is comfortable shaking their booty in a friendly, empowering environment. Dancing makes me happy!

I absolutely love your 52 exercises posts. Brilliant and such important info to share. Thank you for sharing and for putting the time into this.

Previous post: How to Stay Married When Travel is Your First Love