Travel will test any friendship so travel and friends can be a terrible mix.

Take my dear friend Tess who gamely agreed to spend one summer on a kibbutz in Israel with me. Unfortunately that turned out to be the worst job in the world.

But despite that Tess stuck around and agreed to run away from the kibbutz and come to Egypt with me.

There we supported ourselves by weaving friendship bands on a beach in Dahab on the Sinai penninsula.

Those were fun times. We made friends from all over the world, we lived on a shoestring and we got to hang out on the shores of the Red Sea.

The beach in Dahab is set against a stunning backdrop of the Sinai desert while hidden treasures in the shape of colorful fish and coral awaited us under the ocean when we sent snorkelling.

We didn’t make much money though because Tess and I were so slow at  making friendship bands and hair braids that by the time we’d finished them we really had made a friend.

Being peace-loving hippy chicks rather than hard-nosed business men we found it hard to charge our new found travel friends, so we mostly swapped our friendship bands for food. I remember the most expensive dish I ever ordered was a vegetarian lasagna that cost about $1.75.

Life was go0d and we could have stayed in the Sinai all summer. We probably should have too but somehow my itchy feet kept itching away and drove all common sense from my head.

I was mad keen to travel to Jordan, specifically to a little place called Petra which is known as “the red rose city of the desert”.

If you haven’t heard of Petra you might recognise if from the Indiana Jones and the Last Crusade movie. I’m sure my desire to go to Petra was fueled by the most ridiculous fantasies. If I couldn’t actually be Indiana Jones at least I could travel in his footsteps. 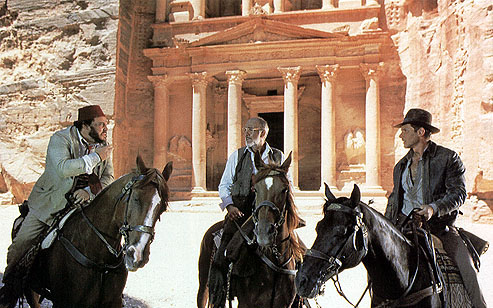 I wanted to be Indiana Jones - actually I still do...

On a map Dahab and Petra are only 222 km (138 miles) apart as the crow flies. So all we had to do was get a boat across the Gulf of Aquaba then find a bus or ten to transport us through the desert to Petra.

But I didn’t really care about those little travel details. I was desperate to get to Petra anyway I could.

Anyway, there was one slightly bigger obstacle than the finer points of how we would actually get there.

We didn’t have any money.

Still, with a chronic travel addiction to feed being practically penniless was not going to stand in my way. I convinced Tess that first we’d go to Amman first, the capital city of Jordan, where we could use my credit card to withdraw money from a bank.

We had to go to Amman because there were no banks anywhere near Dahab and Amman was the only place in Jordan that accepted credit cards. Neither Tess nor me were keen to borrow money but it would only be a small loan because travel in the middle East was ridiculously cheap and we were the world’s biggest cheapskates too. We’d soon repay the loan when we got back to London and found jobs. Or so I said.

Of course going to Amman would add hundreds of miles to our journey and we’d go home with a debt but never mind, this was our one big chance to see Petra and we must take it. 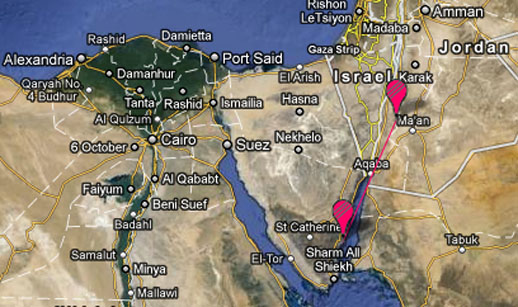 Dahab in Egypt is the lowest red blob, Petra in Jordan the highest red blog at the top. Amman is top right completely out of the way.

I worked and worked on Tess with arguments like that until she finally gave in and agreed to travel to Petra with me.

I cannot remember the details of how we actually got from Dahab to Amman. I’ve probably suppressed them from my memory because the combination of unsafe, overcrowded and filthy boats and buses was so heinous.

But I do remember the hotel where we stayed in Amman.

It was a bomb site and I don’t say that in the figurative sense. I’m sure it really had been bombed, a quite large explosion in fact, which had made the whole staircase cave in. Then the four storey hotel had been rebuilt around the ruins leaving the staircase a pile of rubble.

But that doss house was the only cheap “hotel” in Jordan so that’s where we stayed, picking our way up four storeys of rubble to get to our minuscule room which was entirely bare apart from two hard narrow wooden beds and one shuttered window onto the bathroom.

The hotel was run by two Jordanian brothers who were kind and helpful to us.

Their ancient father, a wizened fellow of around eighty years old who wore a long white robe and nodded politely to us wouldn’t have merited a mention until one night when he caught our attention in the wrong way.

As Tess and I lay reading in our beds I spotted a face at the window and squealed. It was the father peeping in at us.

Incensed, Tresa rushed from the room and shouted at him furiously as he laboriously extricated himself from the blackened bathtub he’d had to climb into in order to spy on us and navigated his way back down the rubble. I feared he would have a heart attack.

The next day we climbed down the rubble too and reported this deviance to his sons who were most apologetic and said they’d have a word with him.

Yes, I remember that hotel well.

The other thing I remember about Amman is that it turned out none of the banks there accepted credit cards. Not one of them.

So we were stuck in the rubble strewn, peeping tom haven hotel for a while because the only way for us to get money was for me to ask my parents to send a bank transfer to us and that takes time. Of course I promised to repay my parents but now Tess had real reason to be mad at me because we were stuck in Jordan with no money and no idea how long we’d be there.

Maybe times have changed but in in 1991 Amman which was a dive and a scary place too with its extreme support for Saddam Hussein.

While you may think of Saddam Hussein as evil incarnate he was a real life super hero in Jordan at that time. You could buy anything you liked with an image of Saddam’s face on it. Badges, T-shirts or wallets were just the beginning. You could even buy a watch with Saddam Hussein’s mug shot staring up at you if you were into it. We weren’t.

But I digress so let’s recap on what my long-suffering friend Tess has been subjected to so far:

We dragged ourselves through dusty streets, squalid market places and sweaty crowds existing on a diet of flat bread, fruit and warm bottled water, trying desperately to eek out the small amount of cash we had.

It took seven long days and seven hot nights for our money to arrive. Yet although Tresa must have been as miserable as me, although she probably rightly blamed for our unfortunate circumstances we got through it because of our friendship, because she was a friend who stuck with me through tough times.

Yes, there were plenty of glum moments but often we  managed to laugh at the absurdity of our situation.

Tess and I made it to Petra in the end.

We didn’t ride a horse through the two kilometer rock crevasse to the red rose city of Petra like Indiana Jones, we walked to save money. But however you make the journey to Petra, whatever hardships you put up with to get there it’s worth it. Petra is phenomenal. 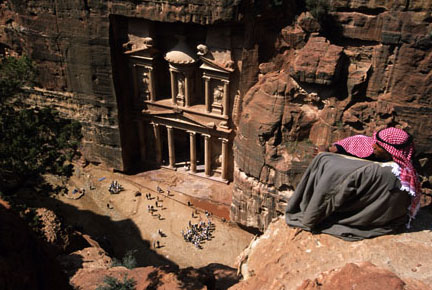 When we left on our travels together Tess was a good friend but when we came back she was a true friend. A friend who stuck with me through the good times and the bad. A friend who kept traveling with me no matter how rocky the road.

Tess even travelled to Zimbabwe several years later to visit me there and we’re still in touch now. She’s now a leading clinical psychologist in London so we don’t have much contact and haven’t seen each other for many years but I still count her as a friend.

With your true friends it doesn’t matter if you don’t speak to them every day.

It doesn’t even matter if you don’t write to them or email them for years.

When you do finally call or email you true friends, even  if many years have lapsed, they don’t hold that against you or make you feel guilty for not being in touch. Those true friends are delighted to hear from you again and your friendship picks up from where you left off.

Those travel experiences with all the highs and lows you go through are some of the best bonding experiences for friends there are.

Friends may come and go, travel friends make the journey more fun and true friends last forever. No matter what crazy travel adventures you put them through or how hard you test them. 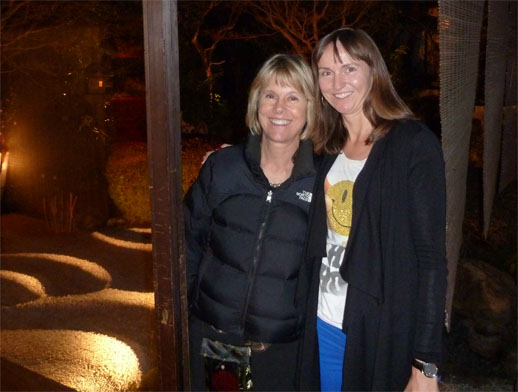 Have you made any travel friends who became forever friends?