“The most biologically intense place on Earth.”
National Geographic Magazine

I was scared about travelling to the Osa peninsula but I never realised I’d actually be squealing with terror on the journey.

With no roads and access only by boat or foot the Osa Peninsula has maintained its wild jungles, abundant wildlife and natural beauty.

We lived only four hours away from the Osa Peninsula but still the journey there is an adventure in itself.

“Traveling two hours by boat, you will pass through the wild Mangrove Forest of the Sierpe River, and then along the stunning Pacific Coast until you reach this tropical paradise.”
Poor Man’s Paradise

The journey boat trip start in Sierpe with a calm cruise down the Sierpe River to the river mouth which is where it starts to get scary.

The passage out of the river into the open sea is notoriously dangerous with big waves, strong currents and no lifeguards to hand if anything goes wrong.

There I was travelling with the Mucho Man, our three kids aged 4, 7 and 10, and my mum aged over 70 having been told by many friends that they wouldn’t risk the boat trip to the Osa Peninsula because it’s too dangerous. 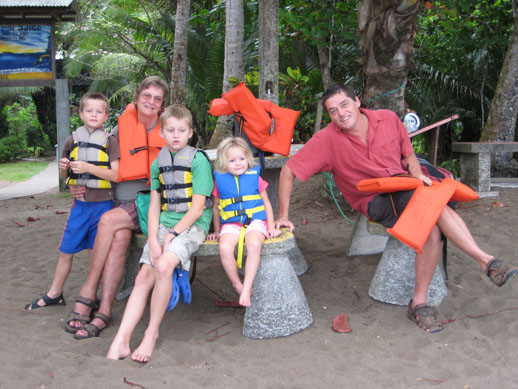 That scared me but I really want to see the Osa Peninsula so we booked a trip, drove to Sierpe and got in the boat.

We all wore lifejackets but still I wondered what I do if the boat capsised or sank. Who would I save? Would I even be able to save myself?

The boat seemed seaworthy, and our captain was experienced so off we cruised and made it through the river mouth into the open sea with no problems. But the worst was yet to come.

We were staying at Poor Man’s Paradise. It’s rustic family owned lodgings with three meals a day included in the price.

They had organised boat transport for us which was also included in the price with a two night stay but there is no dock at Poor Man’s Paradise, just a beach which drops steeply away to the sea.

So when our boat got close to the beach, instead of slowing down, the captain revved the engines and the air filled with the smell of diesel as we speeded up.

I had no idea what the captain was doing. I thought were going to crash straight into the beach, but magically the boat slid of the water and a short way up the beach before coming to halt without crashing into the jungle.

I squealed the whole time though.

During our stay at Poor Man’s Paradise we went on a fanstastic guided jungle hike, let the waves crash us up and down on the beach and saw a plethora of flora and fauna including the endangered tapir pictured here. 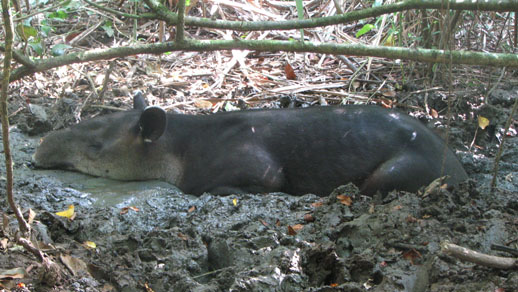 Tapir heaven is taking a siesta in a muddy pool

Described by Wikipedia as:

“a large browsing mammal, similar in shape to a pig, with a short, prehensile snout”, tapirs are actually related to rhinoceros.

I’m so glad I overcame that fear and faced an even greater unknown fear to visit the Osa Peninsula.

Here’s a video of someone else making their beach landing at Poor Man’s Paradise. I can’t hear them squealing but maybe they’d done it before.

Reading by email or in your feedreader? Click here to visit the blog post and watch the video.

Leave a comment, we’d love to hear from you. Have you ever braved a scary journey to get somewhere special?