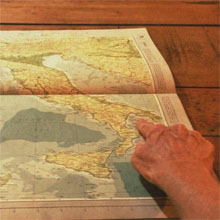 I love travel planning. When I’m organinsing a trip I spend hours on the Internet planning the best route, the best places to stay for the best price, and the bestthings to do that are off the beaten track.

Even when I don’t have any travel plans I often spend hours planning imaginary trips or dreaming about where I’ll go next.

But I’m trying to live more in the moment and having no travel plans can be good too. It allows you to be spontaneous and take opportunities which come your way like great air fare deals, surprise invitations or sudden urges to hit the road.

I started the year with vague ideas about where I’d like to travel to but no fixed plans although I was secretly hoping a trip to Europe would come up.

I went to visit my family in England in 2011 but what I miss most about living in Europe is France and speaking French. Then since our travels in Central America and living in Costa Rica I have a strong yearning to visit Spain and speak spanish. And I’d love to go to Italy because, although I went there when I was about five (my few memories are a bit hazy), I’m curious to rediscover it now.

I’d settle for anywhere in Europe but Italy was calling my name. Some of my dearest friends love Italy, I love the Mediterranean and the lifestyle, food and pace sounds idyllic. I want to know what Italy is really like.

A certain area of Italy has been on my radar for a few years. Called Puglia it’s the ‘heel of the boot’ on the map of Italy and I’d repeatedly heard and read that it’s as beautiful as Umbria or Tuscany but far less touristy. In my mind if I ever visited Italy that’s where I’d go.

Then I was surprised to see that Grace Kelly, a reader and blog consultaton client is living in Puglia now so I left her a comment saying Puglia was on my bucket list.

When she replied saying “Great to hear you’ll be coming here Annabel!” I felt bad. It was a bit premature. I had no plans to go to Puglia, just a vague dream. 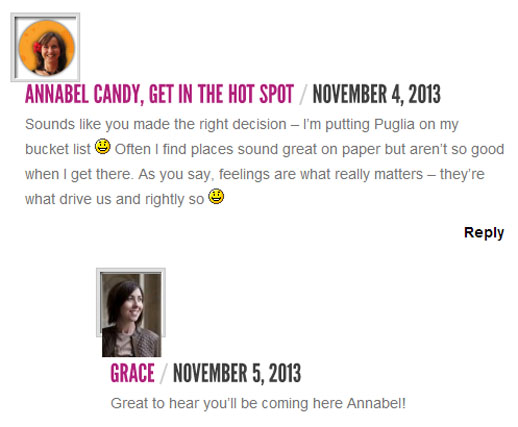 That was in November last year. But then a very strange thing happened. I got an invite to visit Italy on a press trip in Puglia which seemed like it couldn’t be a coincidence. I was convinced that surely someone had heard or intuited my wish to go there but apparently it’s a coincidence. Although I was dreaming of going to Puglia, the Puglia Promzione didn’t know that but they decided to invite me anyway.

So I will soon be winging my way to Puglia from Australia for a 12 day trip with eight sleeps in Italy and a lot of sleeps (or sleeplessness) on various planes. I know it’s a crazy trip but it had to be done.

As well as the short press trip tour I’ll also be hiring a car and meeting my brother who’s flying in from England to hang out with me in a small town called Locorotondo which, by another strange coincidence, is the very place Grace lives so of course we’re hoping to meet up.

Suffice to say I can’t wait to experience the Italian and Pugliese culture, food and scenery. I’ll only get a tiny taste of theier lifestyle in the short time I’m there but I’ll be relishing it and can’t wait to share photos and stories with you.

To whet your appetite for Italy too here’s a photo of the Truli IsAgo where I’ll be staying in Locorotondo taken from the Discovery Puglia website who are hosting me there. 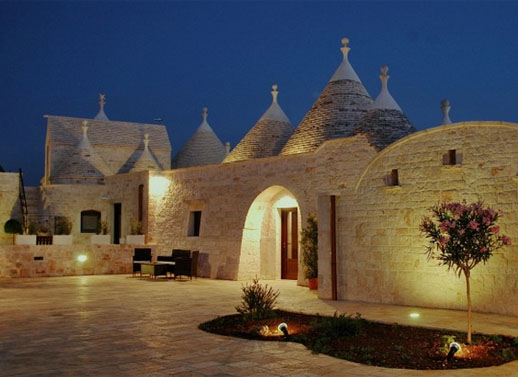 Then no sooner had I said yes to Italy than I got a second invitation which I couldn’t turn down. A trip on the ultra posh cruise ship Queen Mary 2. Weighing in at 151,400 tonnes and 345m long, it’s largest ship ever to visit Australia and sounds completely OTT. There are ballrooms, chandaliers and dancing men. You have to wear formal wear if you want to go to the ball.

It’s certainly not my usual travel style and I’ve never even been on a cruise before so it’s going to be an amazing experience.

Rich gets to go too and we’ll only be on board for two nights but I’m already wishing I could do the whole trip and circumnavigate Australia on the Queen Mary 2 in 24 days. That would be incredible but I think my dear friends would get a bit annoyed if I asked them to have the three Candy kids to stay for that long.

Here’s an image from the Cunard website showing the Queen Mary 2 in Sydney Harbour where we’ll be boarding and setting sail from. I wish the kids were going too as they’ve love to visit Sydney but that will have to wait for another time. This will be a much needed childfree trip.

According to my secret sources, on board highlights of the Queen Mary 2 include the impressive 1347-seat three-level Britannia Restaurant, a 1000-seat Royal Theatre,  a spectacular six-storey Grand Lobby, a Veuve Clicquot champagne bar, onboard shopping at Hermes, Chanel and Harrods and the world’s only planetarium afloat.

I can’t wait to experience a bit of glitz and glamour – it’s going to be quite a change from our family camping experience on a farm in rural New South Wales over the new year!

So, as uncomfortable as I was entering the new year with no travel plans, it’s all panning out very nicely so far. Sometimes you don’t have to make any travel plans because the world has plans for you.

Are you a spontaneous traveler or a planner?

Annabel, it is great how things work out sometimes! All the best for your trips and for 2014!

Is is! Thank you Anne.

Sydney is an amazing place and the Queen Mary 2 is a wonderful ship. You will have a fantastic time. Enjoy time away from the kids and soak up the experience.

Thank you Renee – sounds like you’ve tried it already – we’re excited about thx cruise too.

What a great start to the year for you Annabel. Have a fabulous trip and enjoy Puglia…it’s a fascinating area and the food is sensational!

Thanks Jenny. I can’t wait to experience it all :)

Serendipity favours those who go out to meet it Annabel!
May the rest of the year be as fabulous as February is going to be :)

I have a great feeling about this year Linda – hope you have a fun one too.

Wow! What a fabulous start to the year, Annabel. Both trips sound amazing. Like you I tend to always be planning my next trip but the ‘no plan’ theory sure worked a treat for you this time! Bon voyages.

Plans and surprises are all good – as long as they involve travel :)

Fabulous Annabel! What a great start to 2014 – and may there be many more trips this year :)

I’d go on them all if I could but there are bills to be paid and kids to be fed. I know I’m super lucky to be able to go on any ;)

Omg I was in Locorotondo last year and I had the most divine meal, wine and dessert served by a gorgeous waiter – it is a beautiful part of Italy. Are you going to Matera? Please do if you get the chance. Check out some of my pics on Flickr gofuturemedia
Enjoy!!!!

I am following in your footsteps :)

Oh my word, this is simply incredible!!! I had an Italian lecturer from Puglia… the sweetest ever!!! Anyway she had an apartment in Rome, and the first day of class she mentioned that anyone who wanted to use her apartment just had to ask for the key… Imagine telling that to a bunch of wild, wild students!!! Anyway time moved on and over the winter break I had to go to Greece (tough life I know) for a conference … so asked if we could use her key. (Rome and Greece being almost adjacent!!!) A huge key as long as a ruler. “No problem” we spent a month in Rome, next to Campo di Fiori… it was our base and we travelled all over Italy always returning to the tiny apartment with the huge key!!! You just showered memories… thank you!!! I hope you have the best time ever.

Oh Se7en that sounds amazing. I am finding the Italians incredibly hospitable, warm and generous too :)

Have a safe and wonderful adventure!! I love cruising, and ADORE Italy!
b

I’m here in Puglia and if is amazing!

“Sometimes you don’t have to make any travel plans because the world has plans for you” – so true! All of my major travels have come about because of something extraneous – a friend wanting to go somewhere and asking me to join, going with my parents to renew their vows in Vegas – I never know where my next trip will be because I don’t exactly plan them years in advance. Something always comes up!

It does! Maybe it’s just about saying yes when the opportunity comes :)

Une très bonne nouvelle Annabel…. surely you need an assistant to take notes in Italy no? Or to carry your camera maybe.. What an amazing opportunity and the stars have aligned for you..

Could you rub my feet?! We’ve been doing a lot if walking ;)

Annabel,
Believe in your desires coming true without you having to work hard at them!

You’re coming to Puglia and I’m so delighted, shame about the time of year, but delighted never the less.

Now for me focusing on getting on the Queen Mary when I come to Sydney, that’s more my style!

I live that they are both such different travel experiences and yes, I can see you gracing the Queen Mary 2!

I needed to come as your translator!! I lived in Genoa for a year when I was 18 and 19, au pairing… very formative year. I’m sure that’s why I ended up in Australia, which I reckon is so similar in so many ways.

Have a lovely time, looking forward to your posts from Puglia.

Here’s to being spontaneous, and delighting as the world unfolds in its own way.