Would You Dare Hike Up Mount Barney?

Hiking up Mount Barney is not a walk in the park! Rising 1,359m above sea level, in South East Queensland’s Scenic Rim, Mount Barney’s peak is often shrouded in clouds. It’s an impressive sight from ground level, but not as impressive as the view from on top. A view that the National Parks website warns Mount Barney not accessible to all: 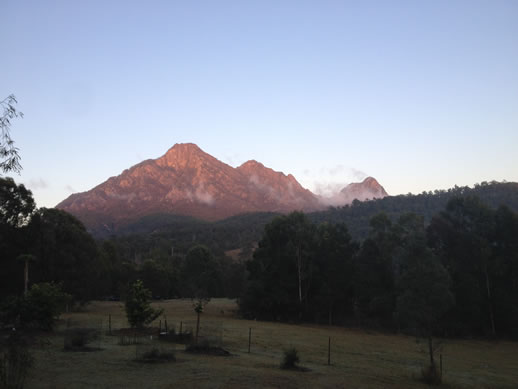 That should be enough to put inexperienced walkers off hiking to the top of Mount Barney but apparently not. Every year scores of bushwalkers, hikers and climbers are injured on Mount Barney, or rescued from the craggy mountain slopes, where they’ve got lost or stuck.

The good folk at Mount Barney Lodge would rather I didn’t write about hiking up the mountain their campsite and outdoor activity center is named after because the owner, Innes Larkin is an experienced climber who acts as a first point of contact for rescue services when things go wrong.

One day last year he was involved in seven separate rescues on M0unt Barney. So it’s clear why he’s not keen for more unfit, inexperienced and unskilled hikers to climb Mount Barney.

Climbing Mount Barney is not something I’d attempt alone but I like mountain hiking, views and a challenge, so I’m fortunate the lodge can provide me with a guide so I can attempt the summit without worrying about getting lost.

Later, during the hike which involves much more climbing than expected, I will still worry about death by falling from the precipitous cliffs of Mount Barney but, when we set off from the campsite I’m not concerned about that yet.

I’m blissfully unaware that what I thought would be a long, steep hike will actually involve some hard core climbing up sheer slab rocks with steep drop offs and craggy walls. When you climb Mount Barney there are places where keeping a firm grip on a rocky handhold or slim tree trunk is all that stands between you and a two hundred meter plummet to the ground. It is not for the faint hearted. 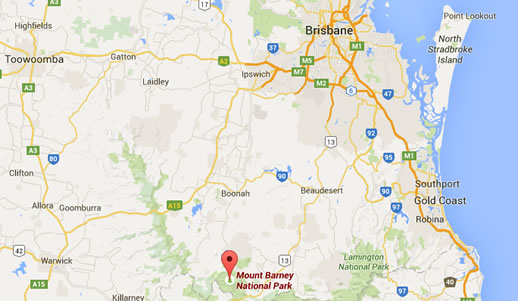 A guided trip up Mount Barney costs $150 per person at Mount Barney Lodge for the 12 hour trip but it’s worth every cent. I set off with a light heart and not a care in the world, knowing I don’t have to worry about how I’m going to get up, or more importantly down Mount Barney safely, because my ex-army bush guide Nathan is in charge of that.

I’m the only person on the tour because none of my camping friends has the energy to make the climb. So it’s just me and Nathan who set off at 6am on a cool, windy September day to climb Queensland’s fifth highest mountain.

It’s a one kilometer walk along the gravel road, past the curious kangaroos with joeys peeping out of their pockets to Mount Barney National Park, then another kilometer hike from there before we really start climbing.

Because I’m the only guest, Nathan is taking me up the more challenging route of the South East Peak. This route will take longer but offer superb views from Mount Barney’s rocky ridges. It will also involve some hard core climbing which makes my chest tighten and my body stiffen. 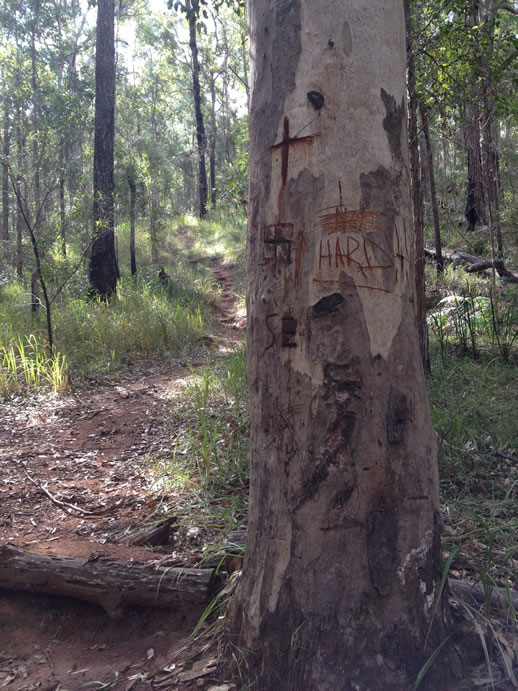 Unfortunately, I have a fear of heights and just sitting on a rock to take in the view of Mount Lindsay scares me. Actually climbing up a precipice with a drop that would leave me looking like strawberry jam terrifies me. 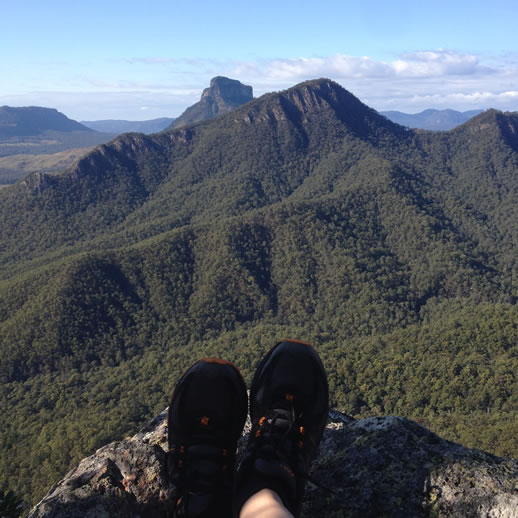 But Nathan is kind and confident so we press on. He is gallant too, offering me a hand when needed and physically pulling me up a couple of times when I get stuck and can’t find a way to haul myself over a rocky ledge. 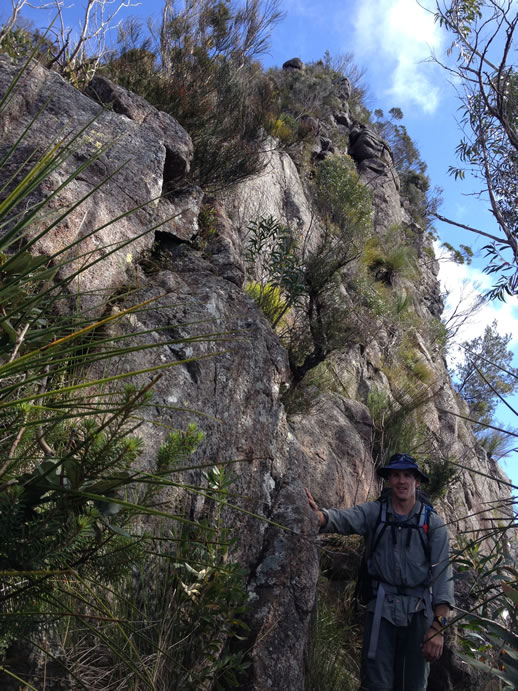 We climbed this! Nathan knows what he’s doing and is fearless. I was not. Do not attempt it alone!

The secret to climbing is not to look down. Just keep your eyes fixed on the rock in front of you, the stony ledge underfoot and the moss covered ledge between your hands. When you do that you stay in the moment and are too focused on the climbing job in hand to be scared.

Only when you take your eyes off the rock and look left, right or down do the palpitations start. Then it’s time to take a deep breath, look back at your hands and feet and keep “moving with a purpose” as Nathan calls it.

I prefer to call it getting it over and done with. Mountain climbing is like taking off a band aid, best done fast.

After nearly four hours in motion the climbing is behind us and we can walk again. The top of Mount Barney broadens out and is peppered with trees and shrubs which give me a much appreciated feeling of safety. There are beautiful wild flowers everywhere. 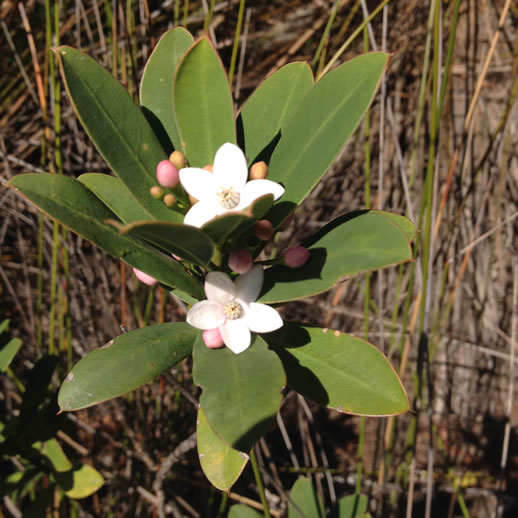 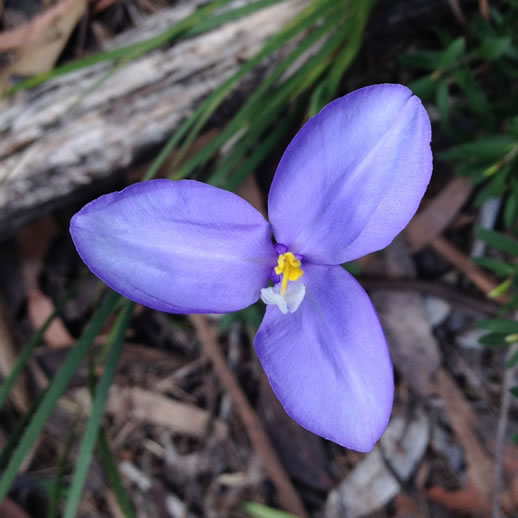 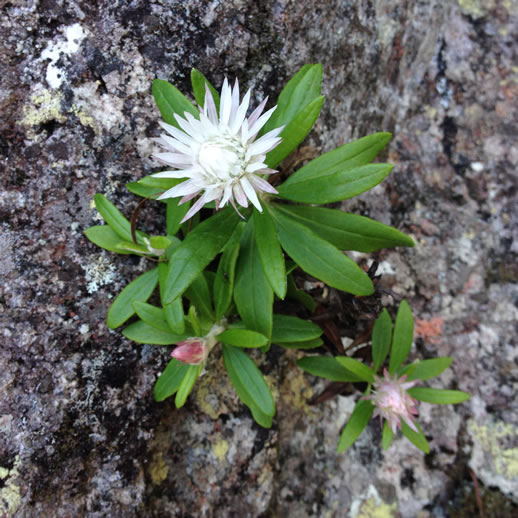 We ascend one more ridge, descend the other side then climb the final ridge of Mount Barney’s South East Peak. 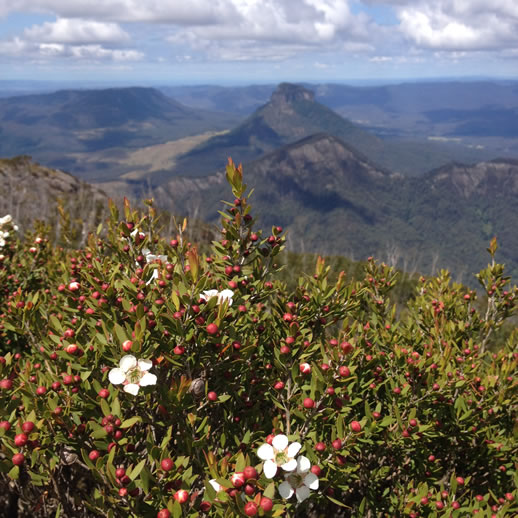 Mount Barney may not be Everest but it’s still the biggest mountain I’ve ever climbed and I’m rewarded with some of the biggest views I’ve ever seen. Nathan even points out Mount Warning which I’ve climbed a few times before. She’s just a baby compared to Mount Barney, as is my local Sunshine Coast gem Mount Cooroora which inspired me to write about the secrets of mountain climbing and life.

To celebrate our successful hike to the top of Mount Barney Nathan puts on the billy for tea and spreads out a picnic lunch. It’s only 10am but we tuck in gleefully. I carried three measly litres of water up the mountain but Nathan shouldered a huge pack including medical kit, spare clothes, a massive wildflower book and heavens only knows what else.

I’m embarrassed that he carried my lunch too but it would be rude not to eat it. No cup of tea and hummus, salad wrap has ever tasted as good as it did on top of Mount Barney.

We spend 90 minutes on the peak enjoying the view and chatting. Then it’s time for the thigh crunching trip back down.

We return by the South Ridge or Peasant’s route which is the easiest route up Mount Barney. It still involves some climbing and sheer drop offs, the only difference being that there’s a small chance you might survive the fall.

Although it should be easier hiking down Mount Barney than hiking up it’s slower. We have to concentrate to avoid slipping on loose stones and my legs, bum and knees are starting to feel it. Although I’ve never been fitter, what with all my running and killer steps sessions, and climbing Mount Barney has been one of my health goals nothing can prepare you for climbing, except climbing itself.

As we walk the final stretch back to lodge past the tinkling stream I start to feel glad that the walking is nearly over. It’s a long hike up Mount Barney.

Finally we’re back at Mount Barney Lodge where I lower myself down onto a cushioned chair and sigh with pleasure.

Then I look up at Mount Barney’s rocky ridges and sky high peaks and shake my head. I can’t believe I climbed Mount Barney. It’s a big day out and a big achievement for anyone. Especially for a middle aged mama but it’s exactly the kind of thing I keep fit for. I’m grateful to the mountain, my guide and my aching thighs. 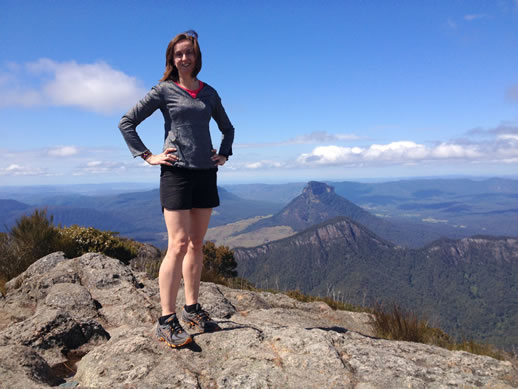 The Aussie bushwalking site had a general warning to all readers stating:

“Bushwalking is a potentially dangerous activity. Ensure you are properly prepared before embarking on any walks.”

Mount Barney is a step up on general bushwalking, so if you want to climb or hike Mount Barney stay safe and hire an experienced guide like the guides at Mount Barney Lodge. You’ll be glad you did.

Join thousands of HOT readers by subscribing to the free weekly Get In the Hot Spot newsletter.