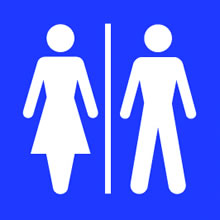 Bathrooms on Planes: The Good, Bad and Ugly

There’s always a queue for the loo on a long distance flight as soon as the air slaves have finished clearing away meals and people can get out of their seats again. Shortly before landing can be bad too, but generally I don’t mind waiting for my turn because it’s a joy to stand up and stretch after being cramped in a too small seat next to a total stranger for hours.

One time I was hanging around by the loos at the back of the plane even though it was vacant. I didn’t need to go but I did need to stand up and stretch. Then an air host approached me.

“Can’t you just go to the bathroom?” he asked. Thinking he’d lost patience with me because I was in the way of his air slaving activities and he just wanted me to go back to my seat I explained:

“I can’t get back to my seat because the trolley’s in the way.” He gave me a funny look but retreated to the kitchen. Two minutes later he sidled up to me again.

“Can I just go to the bathroom?” he asked.

“Oh, of course!” I said. I’d misheard him what with all the background humming and because I tend to think I’m always in people’s way. it turns out I didn’t just think I was in his way I actually was in his way.

Of course there have been worse misunderstandings involving plane toilets. Not so long ago a man was arrested for hammering wildly on the cockpit door after mistaking it for the loo in a drunken and no doubt desperate moment. He was mistaken for a wannabe terrorist and the plane made an emergency landing where upon he was hustled off the plane and straight into a waiting police car. Whoops.

They say that worse things can happen at sea but generally there are few things worse than being up the in the air on a plane and desperate for the loo but unable to get into one. Especially if you’ve been drinking or if you’re trying to get a kid to the loo before it’s too late. Children always urgently need toileting at the worst possible time.

The toilet on a plane is tiny and changing a baby’s nappy involves some serious contortionism as you attempt to grapple a wriggley baby, stop them from falling on the floor or touching any of the germ-infested toilet interior, get a dirty nappy on and a clean one off and washing your hands before you finally extricating yourself with a sigh of relief.

I practice good etiquetee on the plane by always lowering the toilet seat and wiping down the sink as instrusted on the signage in most plane bathrooms. Not everyone does though and it’s horrid to go into a plane and find a dirty, stinky toilet. Still no matter how clean it is my nether regions will never make contact with the toilet seat.  Usually I squat (it’s healthier anyway and also gives you a good thigh and butt workout) but if I absolutely must sit down I will line the seat with toilet paper first.

Sometimes you can sneak my way into the business class loo where they have real cloth flannels, cologne and fragrant hand cream. Even if you can’t fly business class you can get a tiny taste of the benefits by using their loo. Or at least avoid the queue in economy class when you’re caught short mid-air.

Want to read another funny travel story? Check out the perils and perks of potties in Japan.

Get free email updates from Get In the Hot Spot with weekly tips to help you be more adventurous and have more fun. Sounds good? Click here now.

I love a good loo tale! But economy class toilets tend to remind me of port-a-potties (just airborne). I laugh at the comedy loo antics like in Mr Bean (the movie) but really just find them claustrophobic and downright stinky and try not to use them. Luckily I’ve never had to change a diaper in one! Am hoping someone will design a better one some day soon! Great blog btw!

I used to be so scared of plane loos, all that sucking… but used to them now. Once went in for a good old cry… back in the days of broken hearts at airports etc etc *shudder

It’s nothing in comparison with Indian Railways!!

Hi,thanks to sharing post the long time travel in bathrooms available in trains and flight.