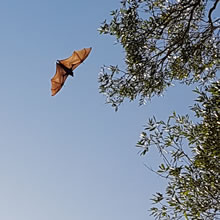 3 Places to See Bats in Noosa

Last time  my mum came to visit us from England we went to see the fruits bat colony behind Noosa library. There are over 1,000 fruit bats roosting in the tall eucalyptus trees across the road from the library and tens of thousands of them around Noosa although their numbers fluctuate with the seasons.

Also known as flying foxes, they’re fascinating creatures. Seeing the odd bat swooping across the clear blue skies in between the green treetops was mesmerising.

Bats are traditionally unpopular with humans but, once you get to know a bit about them, you start to appreciate them. 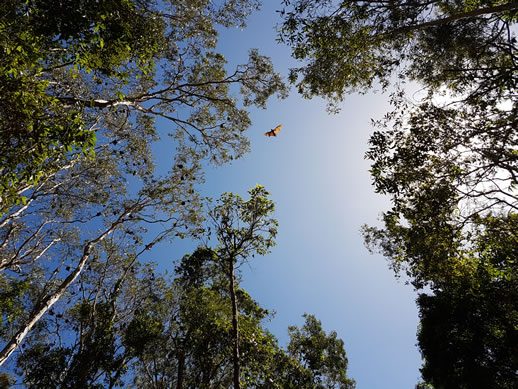 Here are a few interesting facts about bats:

1. Bats and humans have a very similar skeletons, except bat fingers are much longer than human fingers compared to the rest of the skeletal structure. The bat’s “fingers” are the long bones which are joined by a mebrane of skin to form their wings.

2. Like humans, bats most commonly bear only one baby at a time.

4. Bats are a crucial part of our ecosystem because they pollinate trees.

5. Bats eat mosquitos which is good news because I’ve never worked out what mosquitos are useful for. 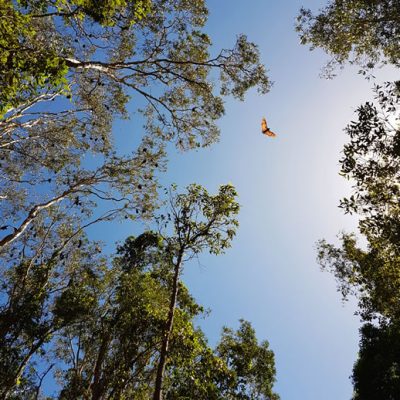 If you’d like to see bats while you’re visiting Noosa here are three places to spot them:

1. Wallace Park opposite the Noosa Library

Bat colonies live around the Noosa Library. If you park near the library you’ll be able to smell their batty poop and hear them squeaking. Go for a walk in the bush and look up to see if you can spot any roosting bats.

2. The AFL ground behind the Noosa Theater

Right at the back of the AFL football field there’s a bat colony. Bat colonies move around following food sources but hopefully they’re still there.

3. Dusk on the Noosa River

If you hang out by the Noosa River at sunset you’ll enjoy seeing the rainbow lorikeets come in to roost in the trees just before sunset and, after sunset, you can watch the bats flying across the Noosa River from Noosa Northshore.

If you want to enjoy some good food and wine while you enjoy the wildlife near the Noosa River Thomas Corner Eatery has outdoor tables on a deck overlooking the river.

There are bats everywhere in Noosa so if you walk around at night you’re likely to see them swooping overhead or hear them flapping around in a tree.

Warning: Although bats are a crucial part of our ecosystem because they pollinate fruit and nut trees, they can carry disease. For that reason you should never touch bat poop or a bat. 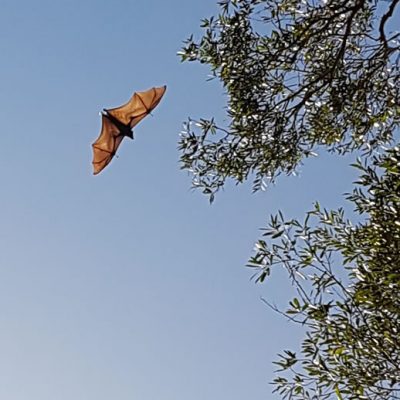 For a weekly injection of travel stories that includes the Noosa Local’s Guide with Noosa travel and food tips click here for free updates now.

Nice blog. And the photography is pretty impressive!

Do you know where there are any colony’s today?

Previous post: Eating Out at One of Noosa Best Restaurants: Thomas Corner Eatery

Next post: How to Face A Challenge You Think You’re Not Up To