Summertime in Queensland. It’s stinking hot. Even here, in the relatively cooler hinterland, the thermometer records a stinking 36°C (97°F).

Waterfalls with natural swimming holes draw the crowds. Everyone’s here. The stick-up Noosa mums. Well, me at least. The German backpackers. The new immigrants. Its good people watching, but the Aussie bogans steal the limelight.

Bogan is a derogatory term for “an uncultured and unsophisticated person; a boorish and uncouth person” according to the Australian Oxford Dictionary. Or maybe it’s a term of affection. My favourite bodybuilder used to be proud to proclaim himself a bogan.

You know what an Aussie bogan is, don’t you? In England, they call them chavs. In the USA they’re known as red necks or trailer trash.

Here’s what you’ll see on Bogan Watch in Queensland, Australia at one of our gorgeous waterfalls.

Everyone’s desperate to cool down. So desperate their parked cars line the narrow winding road. A policeman is busy posting parking tickets under windshields. A nearby house is charging $10 a pop to people who want to park on their private property and avoid a long uphill slog on the way back to the car.

Queensland is over-regulated but bogans don’t care about the rules. They’re rule breakers who metaphorically give the finger to authority figures, law enforcers and kill joys.

As you approach the waterfall signs advise:

Bogans ignore the rules and signage. They do stuff their way. 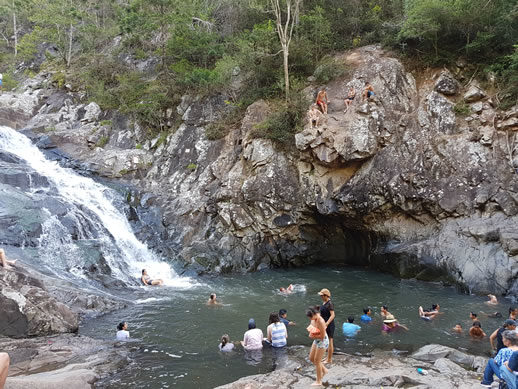 Not everyone who has a tatoo is a bogan but it seems like every bogan has a tatoo. The silver lining behind the searing heat is that it’s a great excuse to wear less, and the less you wear the more tattoos you can show off.

No part of the torso and no limb need remain unadorned. No colour scheme is too garish.

It’s impossible to interpret the motifs or to work out why. Best not to try, because analysing the potential deep meaning behind why one young man has a boar with tusks, blood and gore pouring out of its nose, along with a zombie with one googley eye and a green tongue lolling out if its mouth on the back of one calf. In contrast to this hellish scene, the other calf is dedicated to heavenly ideas. In this case, roses and a pretty girl with a bountiful cleavage. Don’t ask.

Bogans love beer. Or booze of any type. Rum and coke is popular too but beer’s a classic. They pack it in in glass bottles despite the signs and sup it from thermal “stubbie holders” which keep it cool.

The waterfall is spectacular. The noise of the water tumbling onto rocks and washing over tattooed bodied is loud.

But the music is too. Bogan beats fill the air.

Smoking is highly addictive. It’s bad for you and expensive too. But it’s still a great way to show your rebel core and devil may care attitude.

As well as music and smoke, testosterone fills the air.

Young men have scaled the rock face and are somersaulting off. Backwards, forwards, sideways.

The splash often reaches as high as their jump. Some jumps end with a sickening smack. It looks dangerous but no one kills themselves while we’re there. 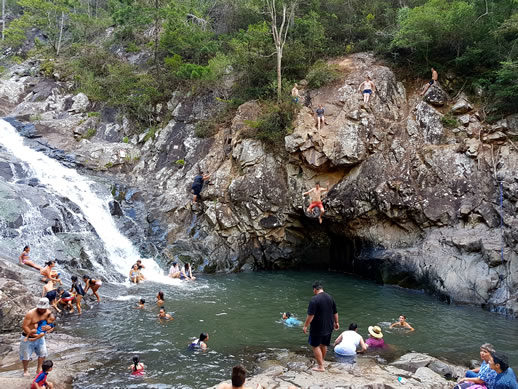 Bogans have interesting hair. They shave it in unusual ways to create unique hairstyles such as the mullet which involves a complicated combination of shaved sides coupled with a long fringe and back.

A few people forgot their togs but it’s too hot to worry about that. Just swim in your underwear. Who cares?

Despite the crowds it’s still a beautiful, romantic spot. If you’re in love there’s nothing quite like pashing in a cool pool. Sure you’re surrounded by people. But again, who cares?

It’s all good fun apart from the litter. There are popsicle wrappers, beer caps and other items that are impossible to identify on the rocks and beside the path.

It’s too bad. But if you can ignore all that it’s still a beautiful spot.

Especially if you wake at first light, steal down there, with a plastic bag for litter collection and enjoy a cleansing swim alone. 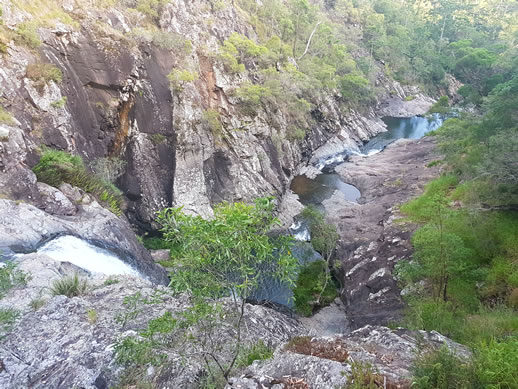 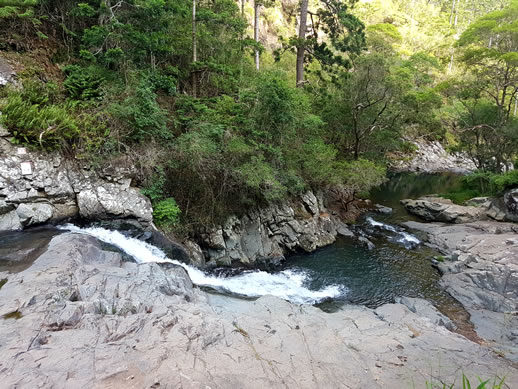 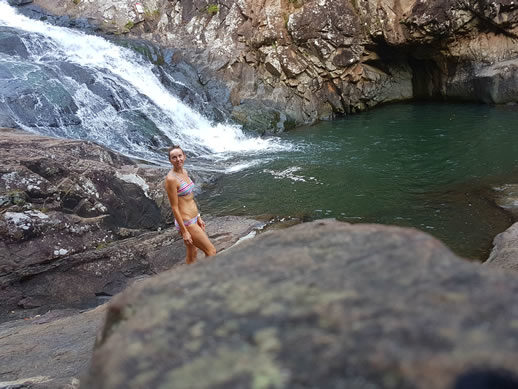 Is there a little bit of Aussie bogan in you?

I think we’ve all got a little bit of bogan in us. I admit to checking two out of the ten signs of a bogan listed above. I won’t tell you which though!

How about you? Do you have a bit of bogan in you?

If you’d like email updates from Get In the Hot Spot click here to subscribe now. Then I’ll email you weekly with the best stories so you never miss out.