The Worst Meal I Never Ate: a Funny Travel Story

The jungle was small but perfectly formed. Surrounded by opium poppy fields and hill tribe villages there wasn’t much left of it, but still it held us in its grasp.

We sat on banana leaves around a smoking fire and waited to see if our tribal chief would return. Small, wiry and energetic, Apae Akha, head of a tiny Akha village in Northern Thailand had gone off hunting.

Soon after we’d arrived in the clearing, he’d lit a fire, told his less vigorous Western guests to stay put and left, a brown bag and bow and arrow slung over one shoulder, his brown legs and clothes soon disappearing into the foliage.

The smell of mold filled out noses the dampness all-pervading. We’d been trekking all day and we were hungry now yet food seemed an unlikely prospect. Although Apae was obviously quite at home in the jungle it appeared unlikely that we would eat tonight.

This was no luxury jungle tour with a white linen dining experience to appease us at the end of a long hot day. This was the real deal; a handful of foolhardy young travelers who’d wandered off the beaten track, a diminutive entrepreneurial village chief who’d dreamed up a tour business, and the jungle.

Only the jungle seemed to have much substance. We humans seemed unreal, impermanent. The jungle had swallowed us whole.

No one spoke much. We watched the fire, waved our hands to blow the smoke away from our faces, looked behind us when a rustle sounded, twitched involuntarily when a fat drop of water plopped on a leaf.

It was getting dark now, the jungle fading to blackness and the fire becoming brighter. The jungle trek, which had seemed like a good idea at the time now appeared absurd. Why would spoiled Westerners pay good money to spend the night free camping in a jungle?

The lure of adventure had called me here but now it was whispering insistently that I should go home. The night was sure to be cold and wet. A hard, damp jungle bed of leaves held no appeal and an empty stomach would only make things worse.

“What’s that?” someone asked. We all listened carefully to a low stirring in the bushes below us.

“Shhhhh!” someone else said bit there was no need. We were all listening, still and silent, to the noise as it grew louder, crackling and rippling through the undergrowth, heading our way.

The blackness was total now. We could see nothing as the noise reached a crescendo of thwacks, brushing and bashing.

Then silence fell again and Apae was there. His face shiny and mud-streaked in the firelight, his arm held aloft in triumph, something small and brown in his hand.

“A squirrel!” he called, triumphant. “I caught a squirrel!”

This enthusiasm was met by silence from his guests. But Apae’s fervor was not dampened by our feeble reaction. He dumped his bow and arrow by the fire, laid the squirrel next to it and reached inside his brown bag.

“And a bee’s nest!” he added, pulling out a bulbous papery sculpture made up of a million hexagons woven together.

“We can eat the baby bees inside. So full of protein,” he explained. 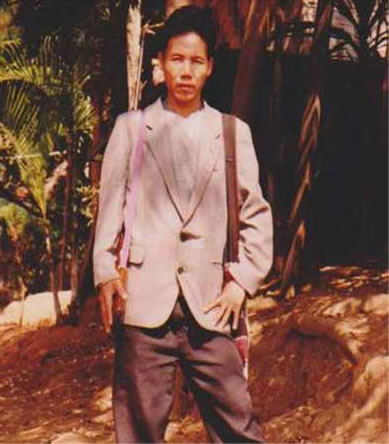 Although this sounds like a bad experience, staying with Apae in his village outside Chang Mai in Thailand, spending time with his family and going jungle trekking with him is still one of my favourite memories of Thailand. And I loved all my travel experiences in Thailand. 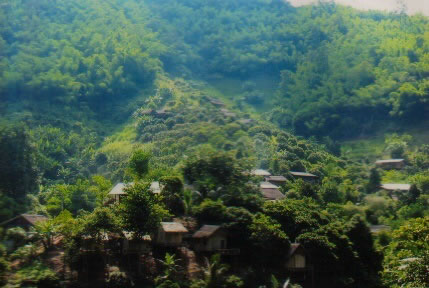 In the end Apae came up trumps with our jungle meal that night but you’ll have to wait for part two of the story to see what I ate… and didn’t eat.

That is Apae in the photo looking just as I remember him with his brown bag by his side. Judging from the photos online he’s gained some weight since I travelled with him 20 years ago (haven’t we all!), but it doesn’t surprise me to see that he’s won numerous awards for his tours. They are well deserved –  Apae is a legend.

Adventurous travellers who like to get off the beaten track can still go to stay at the Akha Hill Village pictured here in the mountains of northern Thailand and take a jungle trek. I highly recommend it. Find out more at the Akha Hill website where the images used for this story come from. 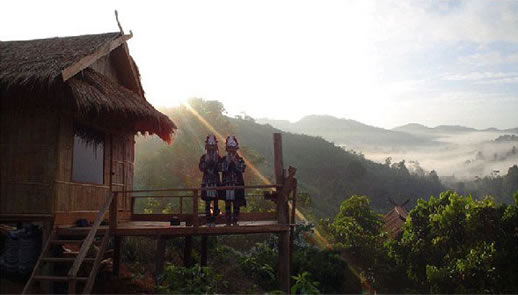 If you’d like to read part 2 of this story and enjoy more travel, health and wellbeing tips subscribe now so you don’t miss out. It’s free, you can opt out anytime and your details will be kept private and never sold. You have my word for it.

What’s the worst meal you’ve ever (on never!) eaten?