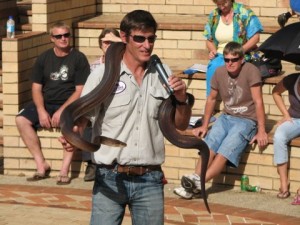 I’ve written recently that winter on the Sunshine Coast in Queensland, Australia doesn’t really get cold. Sorry, folks, I take it all back. It’s now wickedly chilly and some mornings I’m sitting here with
socks, slippers, all my clothes and the pink fluffy dressing gown I couldn’t live without over the top. Hot stuff I know.

My eleven year old son, who’s a great source of Australian news, says winters aren’t usually this cold on the Sunshine Coast. Apparently temperatures have been as low as 5°C (41°F) and oil and fan heaters are selling fast. But when you’re out in the sun it’s fine.

We had a good day out a couple of weekends ago at a water festival at the Noosa Regional Botanical Gardens on Lake McDonald where fish, ducks and turtles abound. It was another fabulous free Noosa event, this one aimed at teaching us how important our waterways are to the environment and why we need to keep them clean, a message which wasn’t lost on us.

The wildlife presentation by Geckoes Wildlife was a highlight and if you like the idea of someone turning up to your kid’s birthday party with a bat, a toad and a ten foot python they’re the people to call.

How to Kill a Cane Toad Humanely

After living in Costa Rica, my kids did know that cane toads, the amphibian scourge of Australia, were imported here from Central America but how to kill them humanely was news to us. Apparently it’s okay to kill cane toads in Australia because they aren’t native but were brought here to eat beetles that were eating the sugar cane. Cane toads are bad news for the Australian eco-system because they breed fast, eat native fauna and, being naturally toxic, they kill native animals who eat them thinking they’re a frog.

So here’s how to kill a cane toad humanely, because the man from Geckoes Wildlife says it’s just not kind to go at them with a baseball bat. Read carefully now, this could come in useful some day. First catch the cane toads in a plastic bag and pop them in the fridge until they fall into hibernation. Then put them in the deep freezer where they will die painlessly. Now don’t forget to use the dead cane toad to fertilise your garden.

Well, I’m always interested to learn new things and I like to think I’m open to new experiences too, but I can’t imagine trying this out so I probably haven’t lived in Australia long enough yet.

Feeling Sick? Relax, Enjoy the Photos of Lake McDonald and the Festival 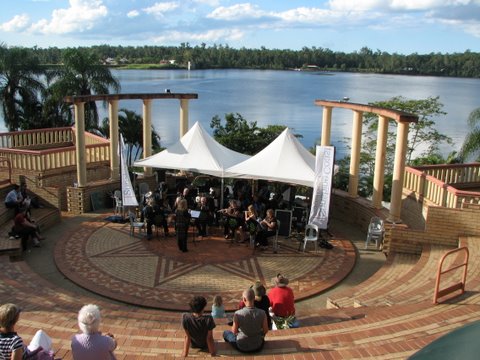 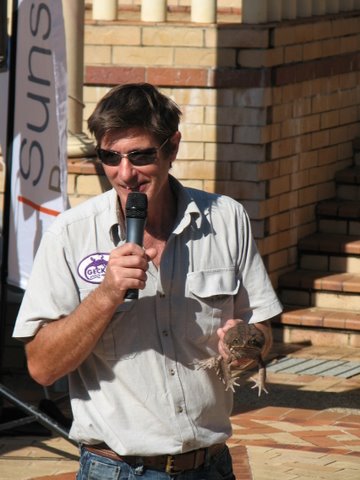 A Geckoes Wildlife Presentation with Martin Fingland and an undesirable cane toad: Educational and Entertaining 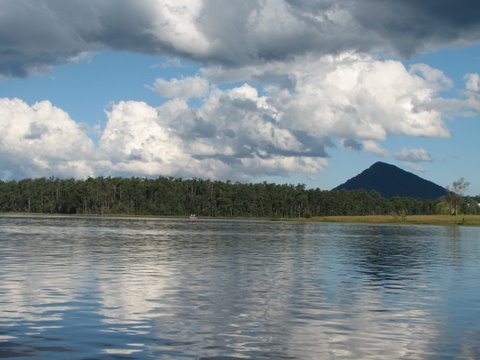 View Across Lake MacDonald During a Free Boat Tour 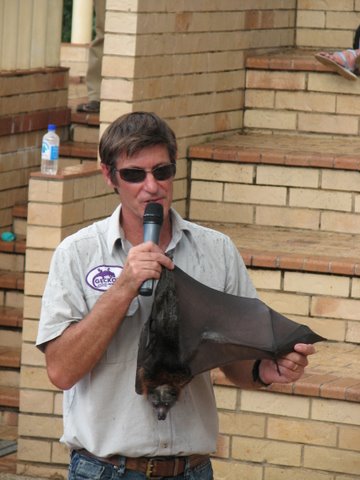 Martin and a Fruit Bat: I love bats and apparently humans are more closely related to bats than to monkeys. Look at it's arm and hand with five fingers and its cute furry face. Sweet.

Thanks for reading, please add your comments below and don’t forget to subscribe by email now if you haven’t already so you don’t miss out.

Good luck with all your plans!

In the old days, we just played golf with the cane toads. Many a Queenslander spent his/her childhood nights clearing the yard and the streets whilst practising a mean swing. They tell us that isn’t humane and they’re probably right. So we moved on to spraying the cane toads with a mixture of Dettol and water. Amazingly quick. But they frown on that method too.

I moved away from Queensland before I had to allocate a portion of my deep freeze to the bodies. But I have heard that one should never make the mistake of removing the frozen dead creatures and tossing them in to the wheelie bin before bin night for they’ll defrost and then … I’ll leave that to your olfactory and visual imaginations.

Poooh! I’ve never even seen one here but they were a nightmare in Costa Rica, always pooing and breeding in our swimming pool. I have to admit I did try to whack a few with my shovel but they always leapt off into the jungle…

Next post: What Can You Give Up To Live Your Dream?