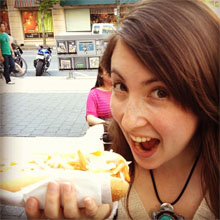 My Flying Visit to Vancouver

Canadian people are famously friendly but Vancouverites exceeded themselves on the friendliness rating when I swung into town.

Arriving at Vancouver Airport I whizzed through passport and customs control, availed myself of the lovely free wifi to video call the Candy family back home in Australia then hopped on the Skytrain to downtown Vancouver.

I’d hardly sat down when two local ladies got on the train, plonked themselves next to me and started chatting away. Strangers striking up conversation just doesn’t happen on the tube in London but it seemed that they were as excited as me about a night out in Vancouver.

So far, after just 45 minutes in Vancouver, I’d met three Vancouverites all of whom were ridiculously friendly and helpful. That’s an impressive 100% friendliness rating, especially amazing in a city and obvious proof that everyone in Vancouver is friendly. Probably everyone in Canada.

It took 28 hours to get from my home in Queensland, Australia to my hotel in Vancouver so I was more than pleased to see my lovely comfy bed at the Coast Coal Harbour Hotel. 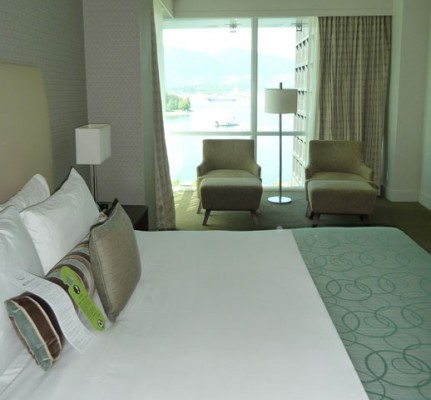 So tempting – the fresh, crisp, comfy bed at the Coast Coal Harbour Hotel

But there’s no rest for the wicked.

It was 4pm and I only had one night to explore Vancouver so, after admiring the harbour views from my hotel room, I had a quick shower to make me feel semi-human again, cast one more longing glance at the bed, then I stepped out into the bright Vancouver sunshine.

It was a glorious spring day. You could feel the good vibes in the air and see them bouncing off the buildings, zinging off the snow-capped moutains across Vancouver harbour and whizzing off the sparkling water.

I planned to visit Stanley Park, just a ten minute walk from my hotel so I grabbed a bike from Spokes Bicycle Rentals and pedalled through the park stopping every few meters to take photos, admire the wildlife and watch the locals enjoying the sunshine. 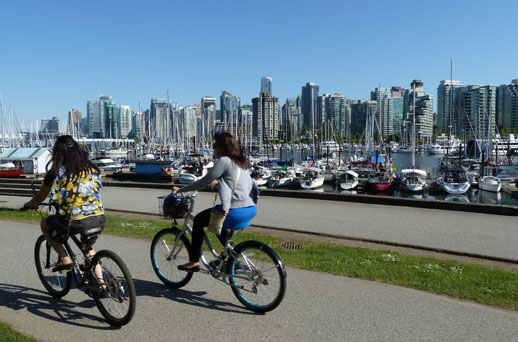 Walk, bike, or rollerblade round Vancouver’s Stanley Park. It’s a popular local hang out wether you want to sunbathe in your undies or pose for your wedding photos 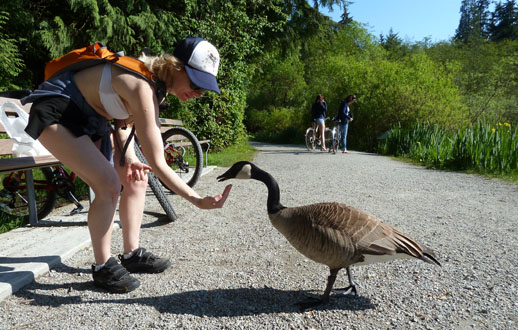 Take time to admire the geese by Beaver Island where the beavers were not in evidence but the beaver den was – it  looks like a big pile of wood heaped up like a bonfire. 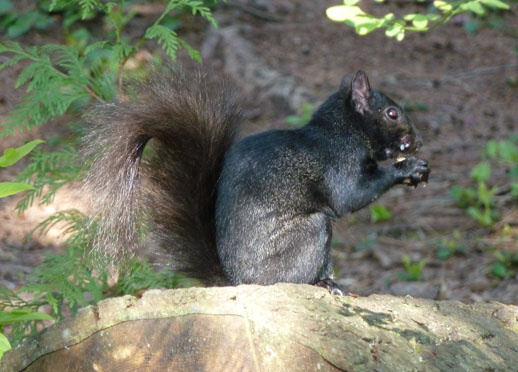 Introduced to Stanley Park in 1948 black squirrels are quite at home here now.

I could have hung out in Stanley Park until dusk but I had to keep moving as two bloggy friends and Vancouver locals were meeting me at the hotel at 6pm.

Writer and editor Sue Chambers (pictured below on the left) and travel writer in crime Lori Henry (on the right below and up top with her Japa Dog) had kindly agreed to give me a mini tour of downtown Vancouver and we were keen to try the food vans. These have sprung up around downtown Vancouver like mushrooms selling good, fast and cheap food that people tweet up a storm about. 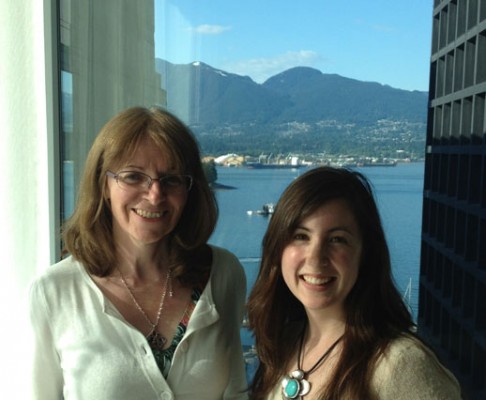 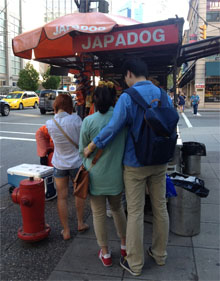 But the food vans cater to the after work crowd so they weren’t around on a Saturday night but for a typical Vancouver foodie experience lovely Lori (pictured up top) recommended a Japadog which is a popular Japanese style hot dog. No, I didn’t know there was such a thing either.

The Japadog food stalls have become so popular in Vancouver that there’s even a restaurant now and they’ve spread as far as New York. Best of all you can enjoy a Japadog even if, like me, you wouldn’t let a regular meaty hot dog pass your lips because there are four vegetarian options.

I opted for the veggie terimayo loaded with shredded seaweed for only $5.25 and a Canadian Dry ginger ale to wash it down with all of which we enjoyed in a nearby park. 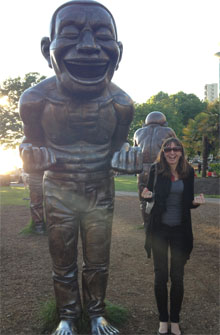 Then Sue, Lori and I walked and talked our way around Vancouver. We ended up admiring the giant bronze laughing man scupltures by Beijing-based artist Yue Minjun, then watching a busker at English Bay.

English Bay is a popular evening hang out and a great place to watch the locals playing frisbee, football or just hanging out with friends and enjoying the sunset.

Finally it was time for me to say bye bye to Lori and Sue, slide between those crisp white sheets at the Coast Coal Harbour Hotel and sleep.

I rested easy knowing that the famed Canadian friendliness is very much alive and kicking inVancouver. 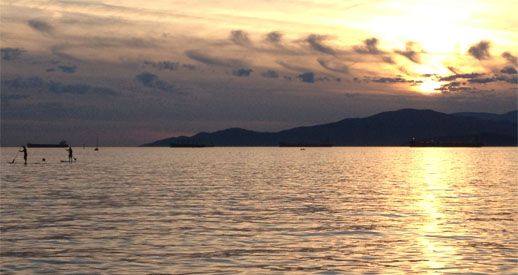 Sunset at English Bay – it gets dark after 10pm in Vancouver in June.

My trip to Canada was organised by the Canadian Tourism Commission with many thanks to Tourism Vancouver for organising my night in Vancouver and my stay at the Coast Coal Harbour Hotel.

Special thanks go to Sue and Lori for a fun evening and your hot company.

Stanley Park, English Bay and a Japadog sampling was all I had time for during my one night in Vancouver but I’d love to go back. Next time I’m in Vancouver I’d like to visit:

What would you do with a free afternoon or evening in Vancouver?

Annabel, Don’t tell me you only stayed one night and then flew back for 26 hours? Is so, you’re super brave.
I haven’t been to Vancouver, but the weather looked amazing and so did the sites.

Lol, no that would have been utterly nutty! After my one night in Vancouver I flew to Whitehorse in the Yukon for four nights then four nights in Banff, Alberta and one night in Calgary. Ah Canada, you were lovely:)

We also rented bikes to tour Stanley Park — such fun. I couldn’t get over how accessible and beautiful it is. When the sun is shining, Vancouver glows. Come to Toronto next time!

Oh I want to! Will you show me round?!

Thanks for the “link love”. Yes, you’ll definitely have to come back to Vancouver so Lori and I can give you a more extended tour. My suggestion would be to skip the Capilano suspension bridge and do what the locals do–go to the Lynn Canyon suspension bridge.

It was a lot of fun to meet you and hang out for the evening. I’m so glad the weather cooperated for you–our fair city is so much more beautiful and the people friendlier when the sun is shining.

I think you might have left your readers wondering which of us in the photo above is the lovely Lori and which is the “word nerd” (i.e., the editor). ;-)

You were great company and a lovely blog model too:) I’ll add an on the left to clarify;)

Oooh, Lynn Canyon sounds like a great insider secret. We’re all word nerds round here though and I mean that in a good way!

And what would I do if I had a free evening in June in Vancouver? I’d go to an outdoor restaurant in a “popular” spot, and entertain myself with people watching and eating seafood. Taking photos if I could.

Sounds like fun and you never can beat a good bit of people watching. I think we’d enjoy an evening together doing just that. The seafood is great in Canada. I feasted on Prince Edward Island mussels, oysters and lobster which were all luscious.

It was great to have you in Vancouver! I’m glad the rest of the people you met were so friendly. Sunshine and beach time always helps in VanCity. :-)

Ahh, I’d love to go to Vancouver. Bicycling seems to be a brilliant way to explore the city. Loved your story about your short stay there, and yes, the bed sure did look super comfy too!!

Nice one Annabel. I appreciate being exposed to this world class city and citizens. Looks like a fabulous destination!

Totally agree: I was in Canada this past winter and was SHOCKED at how nice everyone was! Such a treat coming from New York;-) Fabulous photos, I will definitely have to add Vancouver to my list of places to visit!