18 Years After an Unplanned Pregnancy

When the little blue line appeared on the home pregnancy test kit I cried. It seemed as if my carefree life was over and that, belatedly, at the age of 29 I would finally be wrenched into adulthood. I was right.

Having worked with children since I was a child myself, I’d always known that kids are fun but heaps of work and a full-time responsibility. Definitely not something I was looking for. I loved kids and wanted to have some of my own, but not now. Later. Much later; at an unspecified time in the far, far distant future.

Truthfully, if I had not been careless about contraception in 1997, the great day when I planned a family may never have materialised. So, while some women yearn to get pregnant, it hit me like a blast of projectile vomit; unexpected, unpleasant and unwanted.

Yet there was never any doubt that we would keep the baby. Rich and I had been in a relationship for six years and it was as serious as your waters breaking at work. We’d emigrated from England to New Zealand and were in it for the long haul. While I consider abortion to be an excellent way to deal with unwanted pregnancy it wasn’t something I considered. Although I wasn’t ready to have a baby I went ahead and had one anyway, maybe because I knew I’d never be ready.

So we gave up our life in the city, gave up our disposable, gave up the double income. We gave up the meals out, bar hopping and late nights. We left that behind in New Zealand’s little know capital city of Wellington and moved to Waiheke Island which we thought would be a good place to raise a family.

We arrived on Waiheke on a Friday, bought a house on the Monday and gave birth not long after. We called our baby Luke meaning “bringer of light” which proved to be prophetic. For, as babies often do, he filled our hearts with joy and unearthed a tender, selfless side of us. 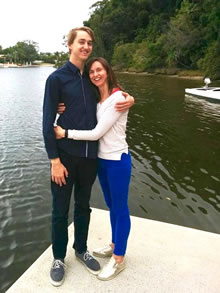 Through an endless round of ante-natal classes, baby circles, Playcentres and Kohanga Reo, baby Luke enabled me to meet and make some of the best friends of my life. Women who nurtured, advised and fed me cake when motherhood seemed too hard. Women who shared their stories of angst and depression and didn’t judge me for mine. Women who invited me to their Christmas family lunches, when I couldn’t be with family of my own. Women who made me laugh, even when I wanted to cry.

Slowly, slowly I adapted to my new role and poured all my energies into my baby who grew and grew, into a toddler, a preschooler and then a school boy with bag packed by mum ready for his first day at school.

Now Luke has left school and is just about to complete his first semester at university. This week he turned 18 so we are celebrating his official entry into the world of adults. Naturally I will always think of him as my baby but I will try not to treat him like one. Our relationship has changed over the years and that little boy towers over me today.

The unplanned pregnancy was a shock at the time but my eyes are prickling now with pride, love and gratitude. Everything changes and amazing changes can happen in 18 years. Helpless baby boys can turn into capable young men.

Has something you feared turned out to be one of the best things that ever happened to you?