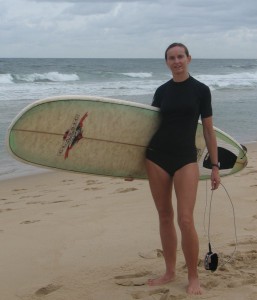 I emigrated from the UK to New Zealand in 1996 and soon set up Internet design company, Immedia, with my husband, Rich. Eleven years later, with three kids, aged two, five and seven in tow we followed our dream of living in Central America and moved to Panama.

The Candy family traveled around for six months and I could have written a travel guide called “The Toilets of Central America”. We ended up living in Costa Rica for a year, but in 2008 we moved countries and continents again, this time to Australia. Just thinking about it now wears me out.

Please email me (annabelcandy at gmail dot com) or leave a comment in the replies box at the bottom of the page. I love feedback and comments and look forward to hearing from you.

I’ve visited 30 or 40 countries in the last 20 years. I was born in Leicestershire, England, but haven’t lived there since she was 18 when I funded her first overseas trips by working as a nanny in France and in the USA. I then studied French and English at London University in between working in an East End pub to pay for trips to Wales, Scotland, France, Egypt, Jordan, Israel, Spain, Portugal, Greece, Germany, Holland and Turkey. After miraculously graduating, but still with no idea what I wanted to do apart from travel, I trained to teach English as a foreign language in order to feed my travel bug. Over the next five years I taught English and worked or traveled in Zimbawe, Malawi, Kenya, Thailand, Laos and Malaysia.

By this time I’d met her husband-to-be, Rich, who told me about email and the Internet in 1995. We were living in Paris at the time and Rich got an email account then showed me how people could now send people electronic messages instantaneously no matter where in the world they were. It sounded great but unfortunately we didn’t know one single other person who had email. How times have changed. Now it seems as if everyone on the planet has email, apart from my mum and even she talks about getting it. It was in 1995 when I’d just got a job as joint managing editor of a glossy English language magazine, that I realised the computer age could leave me behind as I’d never even used a computer. So the duo returned to London where I slayed my demons, went back to university, eventually got an MA in Design for Interactive Media and developed a new obsession for website design, with a particular fixation on ease of use and legibility.

By now Rich and I were becoming jaded with living out of their backpacks and keeping stuff at our parents’ houses so we decided to officially emigrate and set up a new base from which we could continue to travel. We picked New Zealand, mainly because Rich’s sister already lived there and we thought having a close relative would gain us the two extra points we needed in order to satisfy the NZ immigration requirements. As it turned out we actually got three points by joining the Dunedin Darts Club, a clever little trick our immigration agency put them on to. Soon enough we were off to New Zealand for the first time, with a not so quick pit stop in India and Thailand en route.

On arrival we bought a camper van and zoomed around New Zealand for several months before getting jobs in Wellington. Then life threw a curve ball at us and we discovered I was pregnant. The next thing we knew ten years had flown by and we were living on beautiful Waiheke Island with a successful Internet business and three energetic children. Life was perfect and we got married in Vanuatu, but there wasn’t enough traveling going on and the sea was cold in New Zealand so we decided to move to Australia.

But our hearts weren’t in Australia so, much to the consternation of our friends, family and children, decided to move to Panama in order to fulfill a mutual dream of visiting Central America and giving our kids the travel bug too. Either that or put them off traveling for life. Of course, we wanted to check out Guatemala, Costa Rica and Nicaragua as well, then, even though we had vowed not to live in Costa Rica because it was too expensive and home to too many foreigners, that’s where they ended up.

Life in the southern zone of Costa Rica was fine once we got used to the regular home invasions by gargantuan insects, tiny hummingbirds, deadly snakes and confused bats. The kids all settled at local schools and learned Spanish while I concentrated on writing, surfing, watching the monkeys and toucans and learning the lingo. But eventually we had to admit that we couldn’t make the jungle our permanent home as our kids’ education was suffering, so we set off back across the Pacific Ocean to Australia. We’ll always miss the jungle animals and uncrowded waves of Costa Rica, but now hope to live happily ever after on the Sunshine Coast in Queensland. Or at least until the kids leave home. Our kids, now aged 11, 8 and 4, are reintegrating themselves back into normal society, while Rich sets up a new Internet development business and Annabel writes full time.

Not Too Small Print

I was going to refer to the Candy children as Large, Medium and Small because some people think even children deserve the right to have their identities protected. However, like Brad Pitt and Angelina Jolie, I appear to be an exception. Fortunately, Luke, Max and Kiara Candy are quite happy to share their stories with you here.