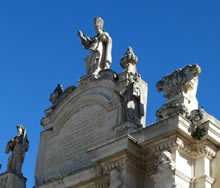 Things to Do in Lecce by Day and Night

Lecce, Italy’s “Florence of the South,” is a maze of narrow streets packed with Baroque churches, lavishly carved facades and doorways that just make you want to peep inside. Tucked in Italy’s heel it’s far less touristy than Florence and, even when Lecce does get busy in the summer months, 85% of the visitors are Italian.

As well as outstanding architecture Lecce offers outstanding cuisine, with distinctive southern Italian cooking served in many of its rustic restaurants coupled with red wine from the Puglia region. It might be traditional peasant fare but it’s fit for a queen.

Traditional food still reigns strong along with other local traditions dating back centuries such as music and art including papier-mâché statues of religious figures.

So what are the best things to do in Lecce?

The Roman Amphitheater in Piazza Sant Oronzo has been partially exposed but most of it remains buried 20 meters below Lecce along with a Roman city that once numbered 20,000 people. 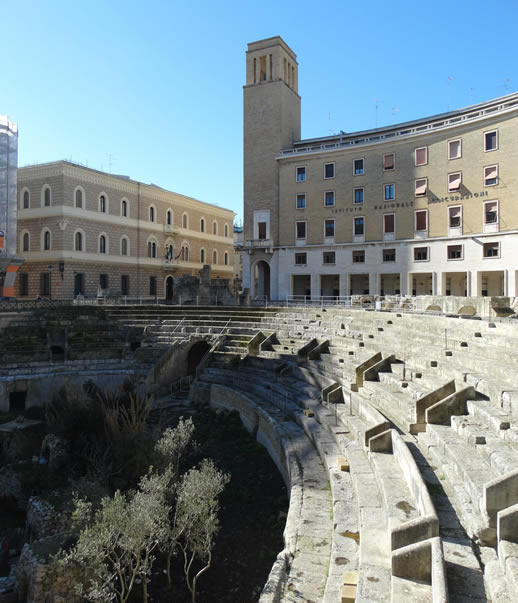 Even the ‘new’ town of Lecce is mostly around 500 years old. This is Piazza Sant Oronzo by day. 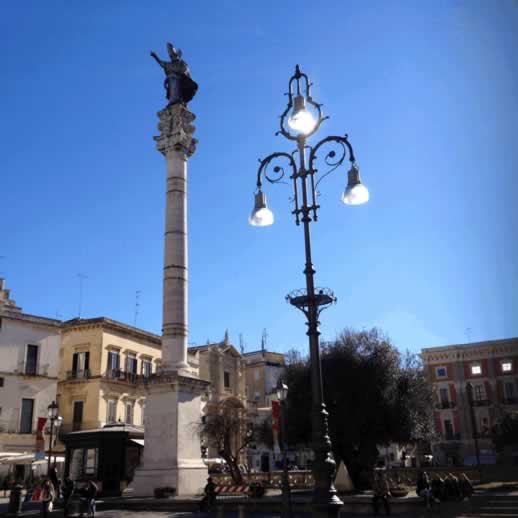 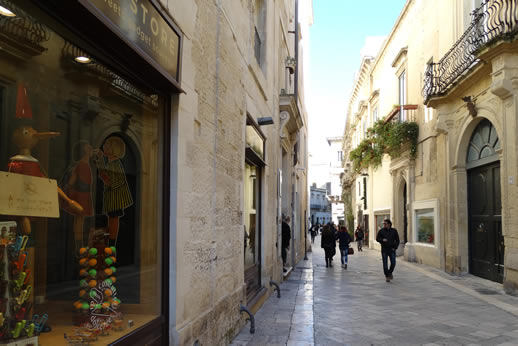 Behind the castle there’s a morning market selling clothes and household items with a small permanent fruit and vegetable market just outside Port Rudiae. I love the food market with all its colors and smells.

Most of the locals take a nap from 2-5pm and the shops are shut so do your shopping in the morning or evening when the shops have opened again.

The park in Lecce with its beautiful green tiled roof on the gazebo is a popular morning hang out with old men. 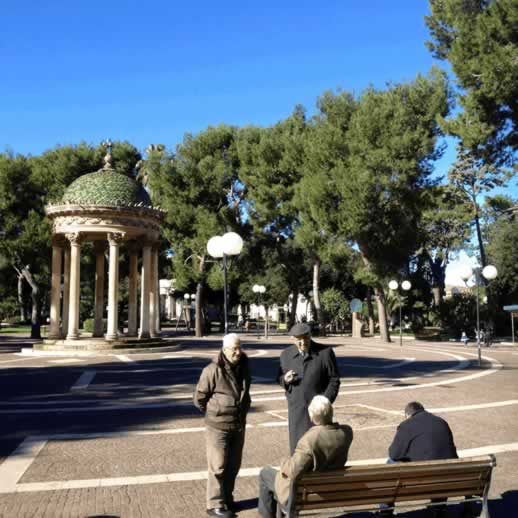 Thanks to the soft Lecce stone Lecce’s Baroque architeecture is unique and highly ornate. Porta Rudiae is one of the gates which welcomes you into the old city where you can wander round the stone paved streets, past endless churches and intricately carved doorways, windowsills and columns.

Porta Rudiae from outside the Lecce city. 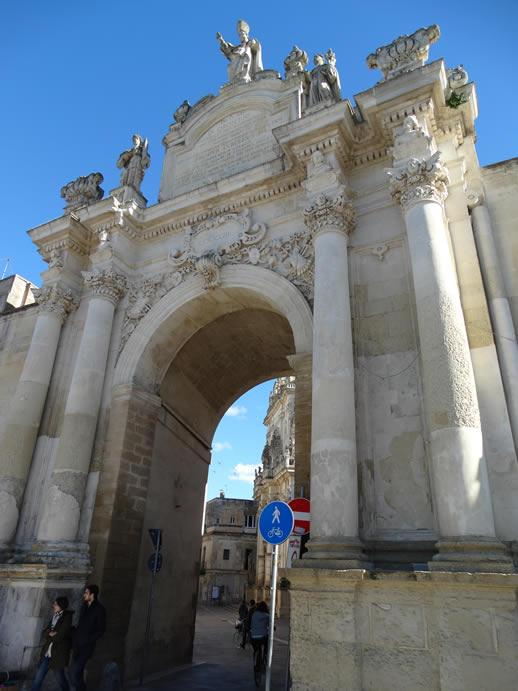 A closer look at Porta Rudiae. 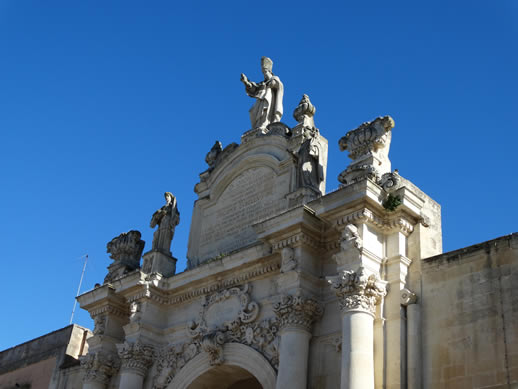 Approaching Porta Rudiae from inside the city gate. 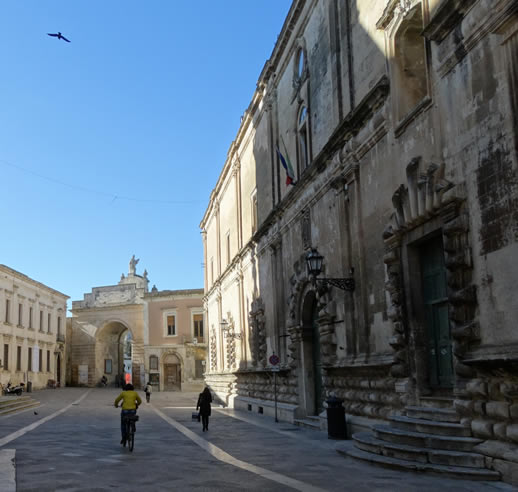 One of Lecce’s 90 churches which beckon you inside. 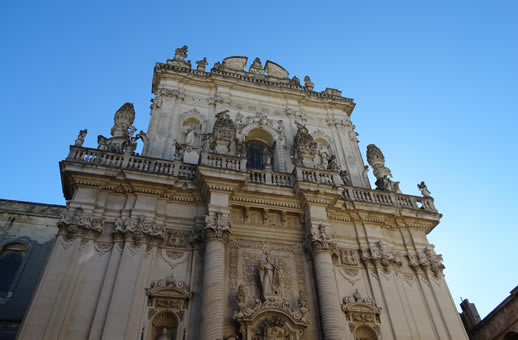 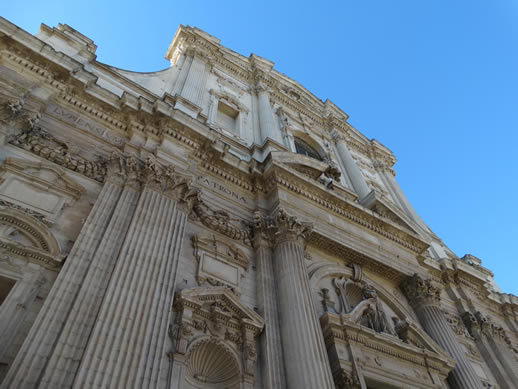 Lecce stone changes colour as the day goes by and so do the buildings depending on the sun and light. 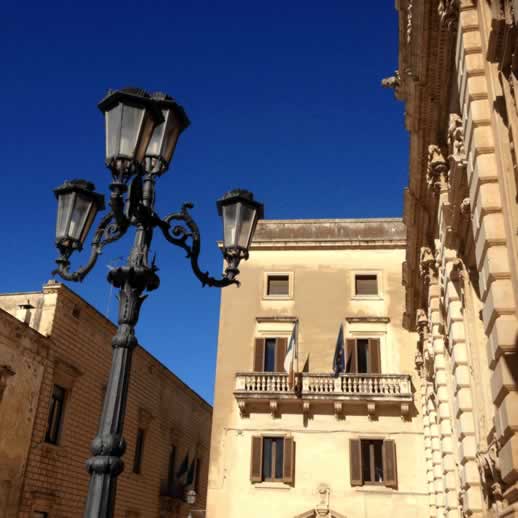 The architecture is slowly decaying in grandeur with angels, flowers and animals carved into buildings and fantastical details everywhere. 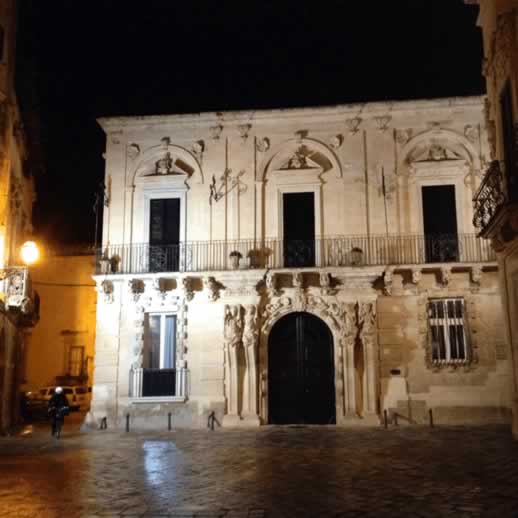 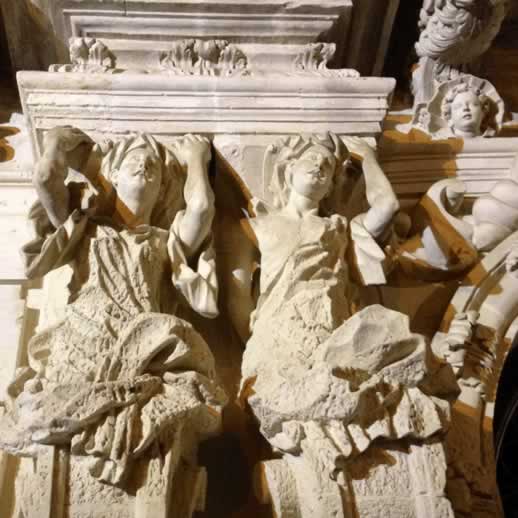 Piazza del Duomo with the catherdal is unusual because it’s only got one entrance and exit. 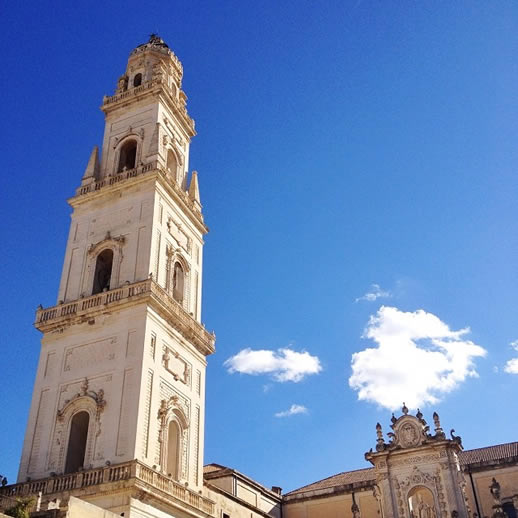 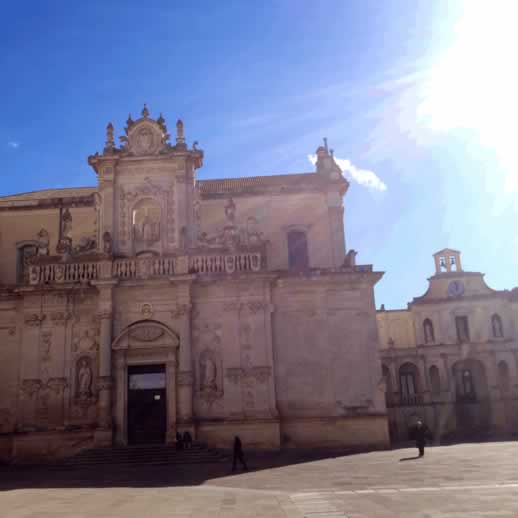 Charles V Castle was built by its namesake at the beginning of the 16th century. There are art exhibitions held inside, along with a display of papier mache figures and a huge underground area where the animals were kept and food stored. 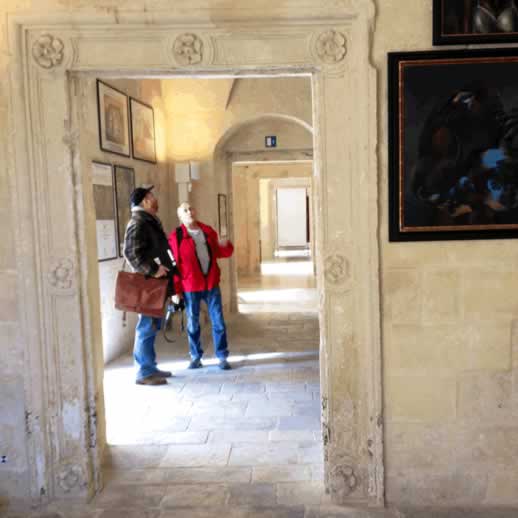 Street sellers congregate with the pigeons around a fountain behind the castle walls. 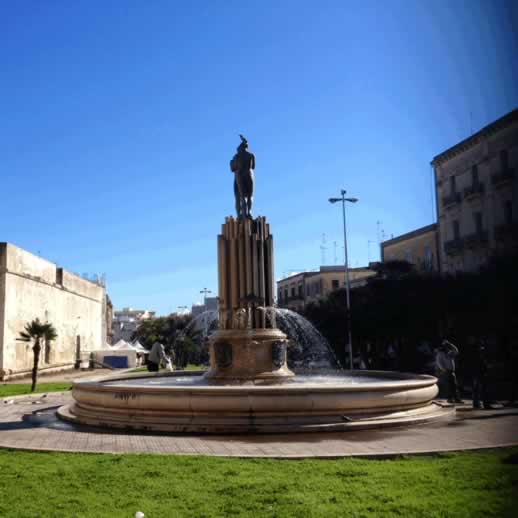 The effervescent Gianna at Lezioni di Cucina Salentina will teach you how to cook local dishes from the Salento area and you can feast on it together afterwards.

If you don’t feel like cooking your own lunch or dinner there are excellent restaurants all over Lecce serving traditional local dishes, many of which are vegetarian. Just ask for Antipasti del’oste to be served an array of local dishes such as cooked local greens, chicory, ricotta and breads.

You’ll probably be full after that but try to make room for your first course of pasta and your second course of meat.

Finish the meal off with a local dolce of pastry stuffed with custard and an espresso coffee to perk you up afterwards. You’ll need it if you’ve been drinking the lovely light pink sparkling spumante or red negromara wine with your meal, as you should. 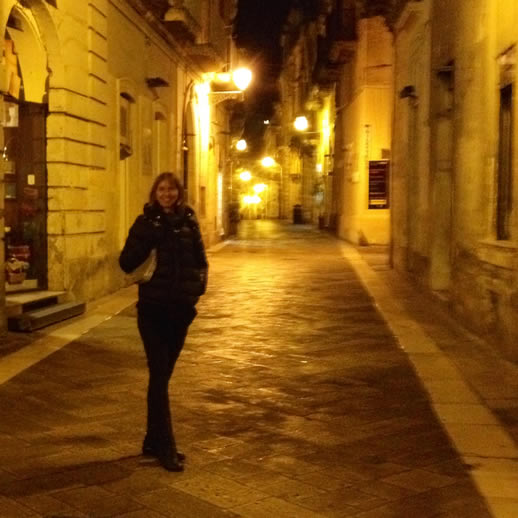 I was a guest of PromozionePuglia and Agrifeudi during my stay in Lecce and the Salento area of Puglia. You can find out more about visiting Lecce and experiencing the Salento region with local help with Agrifeudi.

I’ve got heaps more stories and photos to share with you about my experiences in Puglia so stay tuned.

How marvellous to be in Italy. The weather looked fantastic. I haven’t ever visited this particular part of Italy, I imagine it’s a bit warmer than the north in winter/spring. It looks glorious and what a joy to avoid the throngs of tourists in other cities.

Actually the weather was terrible which was very unlucky but thank heavens I got one sunny day! I’m sure it must be warmer in Puglia than in northern part of Italy and less tourist too – bonus :)

I loved the time we spent in Lecce a couple of years ago. The architecture is stunning and the food delizioso! Looks like you had great weather too.

Ah the food! I need to dedicate a whole blog post to that.

Wow, looks as if you had an amazing time. I loved the architecture shots – how I crave antiquity living as we do in WA. I had imagined warmth, but the photo of you at night all dressed up in a snug coat brought back to me the fact that it’s deepest darkest winter. Wondering if you had snow. Can’t wait for more stories.

No snow but it was chilly, especially at night. I loved the architecture – we don’t have anything like that in suburban Queensland :)

What amazing architecture, I love the angels. Wow, 90 churches in Lecce – I hope you didn’t have to visit them all! You’ve tempted me to visit just for the custard-filled pastry. Buon appetito!

Lol, no that would have been too much! The pastry was lovely…

Lecce is now on my list of places to visit in Italy when I return. It looks stunning. Such a beautiful country. I have been obsessing about returning since we visited last year. I’m looking forward to reading more.

I’ve been reading your latest articles about your trip in Puglia and I’m glad you had a good time even if the weather wasn’t as great as during summer :)

However for your readers and for future reference once they will come in Salento, the local “dolce” made with pastry and stuffed with custard cream it’s called Pasticciotto, traditionally it’s made just with custard cream, but there are many variants like with crema pasticcera and black cherries or with chocolate cream.
While the locals enjoy it served for breakfast it’s also perfect after a meal or for an afternoon coffee.

Previous post: I Got on TV During My Travels in Puglia