The Financial and Emotional Cost of Moving to Australia with Kids 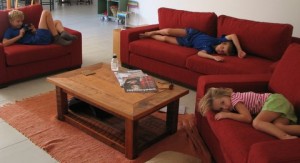 When the sofas arrived there wasn

In which we broach that delicate, some would even say taboo, subject of money

I thought I’d wait until I’d been down to the Centrelink office to write this one. Centrelink is the government department which deals with dolling out family tax benefit and childcare benefit, two wonderful little surprises that have been offered to us here in Australia. All very handy if you have three kids and limited cash flow. We haven’t quite managed to set up our new business yet but it is in the pipeline and in the mean time we have to tighten our belts. I don’t think they had these benefits for big families like us in New Zealand, or if they did, they kept very quiet about it.

What’s more the Australian Government is, even as I write, rolling out stimulus packages designed to keep the economy ticking along during these times of what’s being called a global recession. We’re not the only ones trying to keep to a budget. While some people are being laid off left, right and center, we are boldly seeking employment. Rather untimely of course, but we remain undaunted. We’ll have to wait and see, but it’s possible the stimulus package could give us a small cash injection which would certainly help to pay for those school uniforms, school books, karate suits, Surf Life Saving Club kit, SLSC membership, swimming lessons, drama lessons, basketball lessons, computer software and, well, maybe it won’t stretch quite that far!

I know that for most people the expense is one thing that puts them off moving abroad. For us I have to say it’s been much less expensive than we imagined. The main cost of moving here has been buying new furniture, kitchen wares, electrical items, outdoor toys and computer equipment. Because we were originally leaving New Zealand for Costa Rica and those two voltage systems are incompatible, we sold or gave away all electrical items. We also got rid of most of the big items of furniture to cut down on the cost of storage, which as it turned out, was for 18 months, and reduce shipping costs. That’s why, when we finally did find a rental house after three weeks of searching, we all slept on mattresses on the floor for the first few weeks. With our travel track record these kind of things don’t really phase us much and the kids are equally adaptable. In fact, Hubby and I are still on a mattress as we are having our bed made to order by a lovely wood craftsman who is pleasingly called Mr. Wood. It is a wonderful firm king-size version, an upgrade on the queen-sized versions we slept on in NZ and CR. But I digress.

So, the house was pretty empty when we loved in. We bought a knackered old dining table in a Salvation Army store, mainly because it came with six pretty good modern stacking chairs and we had the mattresses of course, and a camping chair, but that was about it. This house has a big living area with a tiled floor and the kids had a lovely time running around screeching in the echoey spaces. It just about did our heads in. We moved in here on December 18th and even now we still have no sofa so the living room looks very bare. Who’d have thought that it would take eight weeks for a sofa to arrive? I certainly didn’t. At least we picked up a $200 sofa in Ikea for the kids. For a while there we were eating off plastic plates too before I got hold of some china ones. But looking back it is amazing how much we have managed to achieve in two months.

The stuff we got shipped from New Zealand was hugely delayed in getting to us, mainly because the local Waiheke Island removal company were a bit slow off the mark, so our boxes and furniture arrived in Oz right before Christmas. Before, during and after the festive season the Brisbane ports and docks people go into some type of seasonal limbo. They don’t care if you are reduced to eating your Xmas lunch at a Salvation Army table. In fact, they quite possibly gain considerable pleasure from holding your beautiful recycled kauri table hostage in their warehouse for as long as possible.

So reluctant were they to let us have that table that they actually broke it in the end. A quite considerable feat when you consider that this is a solid wood table with all surfaces about four centimeters thick. Well done guys. It must have been much easier, and probably more fun, for them to break our two green shelves and knock three large castor wheels right off the bottom of them. But they were kind enough to hang on to the wheels and get them back to us so all is forgiven. Of course, we had taken out insurance for our dearly beloved personal effects and best items of furniture so no harm done. Except, really by the insurance company whose brilliant excess limit of $500 was just about equal to the cost of the repairs so not worth our while putting a claim in. Hey ho.

But the time is nigh when I must do the school run and collect our dearly beloved children from school and childcare. Then I need to take one of them to the doctor for a skin scraping to find out whether we have picked up some virulent tropical parasites as a souvenir from Central America, or if it is something more pedestrian which is causing the blistering skin rash around one little Candy’s hips and thighs.