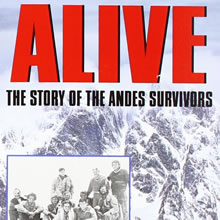 Maybe all those survival stories make me appreciate my humdrum suburban existence and comfy couch more. But I think what I love most about survival books is trying to understand what makes some people survive apparently intolerable circumstances and why others give up on life.

Human psychology and the choices people make have never been more fascinating than when life is hanging in the balance.

It makes me wonder about my own ability to keep calm in a crisis, behave rationally in crazy circumstances and make the right life-saving decisions. I’ve noticed that daily life can raise my anxiety levels through the roof but when crises happen I manage to stay calm and get through it fine.

For example, after reading about shipwreck survivors pulling straws to see who eats who and who finishes off a companion for their next meal (see In the Heart of the Sea), I started wondering how my family would get on if stuck in a life raft with no food.

Would the kids eat Mum and Dad or would we eat them? Or maybe we’d all starve because we were too emotionally attached or polite to kill each other off and gobble each other up?

Well, hopefully I’ll never find out, but these are the type of fascinating moral issues my mind likes to churn over.

If these issues interest you or if you’d just like to read an amazing, if somewhat harrowing story about the trials humans can endure here are some survival books I loved, in no particular order:

Krakauer’s epic account of the 1996 Everest disaster which killed many climbers is a classic survival story. An incredible survival book and brilliantly written. It makes you wonder why people do things like climb Everest while also admiring their tenacity to keep following their dreams no matter what.

2. Alive: The Story of the Andes Survivors

In which a Uruguayan Rugby team endures a plane crash in the snow covered Andes. Of the 45 people on board 16 survivors stay alive for 72 days by eating their fellow (dead) passengers. Read this survival book to see what drives people to survive no matter how desperate their circumstances seem to be.

3.Touching the Void: The True Story of One Man’s Miraculous Survival

Joe Simpson and his climbing partner Simon Yates had just reached the top of a 21,000-foot peak in the Andes when disaster struck. Simpson plunged off the vertical face of an ice ledge, breaking his leg. Still attached by a rope Yates tried to lower his friend to safety but was eventually forced to cut the rope.

Certain Simpson was dead, Yates returned to base camp consumed with grief and guilt over abandoning him but miraculously, Simpson had survived the fall and eventually managed to crawl back to camp.

4. Lost in the Jungle: A Harrowing True Story of Survival

This harrowing survival book adventure is another true story about four backpackers who meet in Bolivia and set off into the rainforest on a dream expedition. But the adventure of a lifetime quickly becomes a struggle for survival when they get lost in the wilds of the Amazonian jungle.

The group splits up after disagreements, and Ghinsberg and friend try to find their own way without a guide. When a terrible rafting accident separates the two men, Ghinsberg is forced to survive for weeks alone in one of the most unpredictable environments on the planet. Stranded without a knife, map or survival training, he must improvise shelter and forage for wild fruit to survive. As his skin begins to rot from his feet during raging storms, he wonders if any of them will make it back alive.

5. Red Sky in Mourning: A True Story of Love, Loss, and Survival at Sea

Ashcraft’s sailing trip with her fiance ends in disaster when they sail into a hurricane and she wakes up to find that her loved one is gone. To make things worse the boat’s motor was shot and the masts have disappeared.

Utterly alone and weeks from land Ashcraft’s book chronicles her 41-day journey to safety and shows amazing fortitude. This survival story offers an inspiring reminder that even in our darkest moments we are never truly alone.

6. The Perfect Storm: A True Story of Men Against the Sea

You may have seen the film but the book is better – even though it doesn’t have George Clooney in it! This survival book covers the storm of the century, with waves over one hundred feet high.

Sebastian Junger explores the history of the fishing industry, the science of storms, and the candid accounts of the people whose lives the storm touched. It gives us an idea what it would feel to be helpless against forces of nature beyond our control.

7. Left for Dead: My Journey Home from Everest

This book also covers the 1996 Everest disaster from the point of view of Beck Weathers who was left for dead. Inexplicably twelve hours later, he walked down the mountain blinded, gloveless and caked with ice.

In this powerful memoir, “dead man walking” Weathers describes not only his escape from hypothermia and the murderous storm that killed nine climbers but his love of this dangerous sport and road to recovery since the disaster.

Tragic and unforgettable story about Christopher McCandless who gave $25,000 in savings to charity, abandoned his car and most of his possessions, burned all the cash in his wallet, and invented a new life for himself.

Four months later, his decomposed body was found by a moose hunter in Alaska.  How McCandless came to die is the unforgettable story of Into the Wild.

9. High Adventure: The True Story of the First Ascent of Everest

If you start to enjoy the Everest survival stories then you’ve got to read this one by Kiwi hero Sir Edmund Hillary, the first man to climb Everest along with sherpa Tenzing Norgay. Staring fear in the face they kept their eye on the prize and did what no one had ever done before.

A survival book that shows we can do anything if we believe in ourselves, team up with the right people and persevere.

10. Skeletons on the Zahara: A True Story of Survival

Hailed as a masterpiece of historical adventure, this survival book recounts the experiences of 12 American sailors who were shipwrecked off the coast of Africa in 1815, captured by desert nomads, sold into slavery, and subjected to a hellish two-month journey through the Sahara.

The ordeal of these men – who found themselves tested by barbarism, murder, starvation, death, dehydration, and hostile tribes that roamed the desert on camelback – is made indelibly vivid in this gripping account of courage, brotherhood, and survival.

11. Between a Rock and a Hard Place

Hiking into the remote Utah canyon lands, Aron Ralston felt perfectly at home in the beauty of the natural world. Then, eight miles from his truck, in a deep and narrow slot canyon, an eight-hundred-pound boulder tumbled loose, pinning Aron’s right hand and wrist against the canyon wall.

Through six days of hell, with little water, food, or warm clothing, and the terrible knowledge that no one knew where he was, Aron eliminated his escape options one by one. Then a moment of stark clarity helped him to solve the riddle of the boulder -and commit one of the most extreme and desperate acts imaginable – sawing his own arm off.

12. In the Heart of the Sea: The Tragedy of the Whaleship Essex

This survival book is currently in a bestseller and it’s the one that prompted me to write this post. The book tells the ordeal of the whaleship Essex sinking which was the basis for another great book Moby Dick.

In 1819, the Essex left Nantucket for the South Pacific with 20 crew members aboard. In the middle of the South Pacific the ship was rammed and sunk by an angry sperm whale. The crew drifted for more than 90 days in three tiny whaleboats, succumbing to weather, hunger, disease, and ultimately turning to drastic measures in the fight for survival. An intense and mesmerizing read.

That’s it! I hope all those grueling survival stories don’t put you off travel and adventure. I find they make me want to go off on my own adventures even more! Though I never want to find out  how I’d really fare in a survival situation.

Have you read any good survival books lately?

Want more HOT tips and inspiration on how to lead the life you want?

Stay tuned to Get In the Hot Spot – a travel blog for women aged 40+ who want to enjoy new adventures, have more fun and feel fabulous.

Thanks for the recommendations, Annabel. I’ve read some of these like Into thin Air and Into the Wild (so sad), but most of them are new to me. Those are interesting questions you pose! Difficult to know how it would go till you’re there. :)

I know, that is a sad book. Let’s hope nothing like any of these survival experiences happen to us :)

Love this list. I always think ‘why read fiction when real life stories can be so interesting?’ Well, not my real life (fortunately? unfortunately?) but someone’s! Will definitely check out Into the Wild – thanks Annabel.

You’re welcome Britt, I love memoirs and it doesn’t get much more riveting than a true adventure/survival book :)