Thanks to a timely visit from my brother, his wife and their wee ones, we had plenty of excuses to drop tools and do the tourist thing over the Easter Holidays. 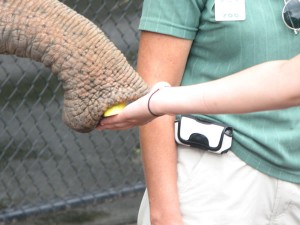 A definite highlight of any visit to the Sunshine Coast has to be Australia Zoo, home of the late ‘Crocodile Hunter’, Steve Irwin. Thankfully, his wife, Terri plus kids Bindi and Bob are very much alive and kicking and continue to own and run the zoo as well as live there. Well, probably not in the zoo exactly, but, as far as I can make out, just behind it.

I confess, I relegate zoos to one of the many activities that we do purely for the children, but crikey, even if a couple of adults were visiting me with no rat bags in tow, I’d still recommend they visit Australia Zoo. Please note, when we were at Disneyland in Los Angeles last November I marvelled at the number of kid-free adults I saw there, Mickey ears firmly in place. I swear we even saw a couple of honeymooners push small children aside in their desperation to get their photo taken with someone dressed up as Bugs Bunny. And they weren’t even Asian.

But back to Australia. There are a few things that make Australia Zoo stand out from the average zoo, the big one being money. Thanks to the vast branding and the Crocodile Hunter TV shows, doubtless still being shown all over the world, as well as the new TV shows and a soon-to-be-released movie starring Bindi, cash flows freely. This means that the animals have gorgeous enclosures, the best care available and, according to the literature, fresher food than we humans get from the supermarket. Beaut.

As you can imagine, the difference between Australia Zoo and Guatemala City Zoo, the last zoo I’d visited, is noticeable. In Guatemala City Zoo, the animals lie listlessly in a concrete pen, their eyes glazed over and their coats dull. In Australia Zoo the healthy inhabitants roam beautifully landscaped gardens, and enjoy frequent cuddles with a bevy of beautiful volunteers. Guys, if you want to meet some gorgeous young Australian girls I recommend you reinvent yourself as a wombat or a giant tortoise in Australia Zoo. 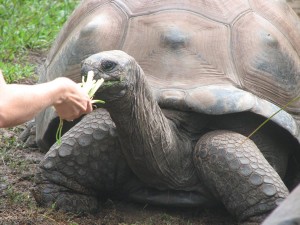 Human-Animal Interaction for the Masses

Still, Guatemala City Zoo was cheaper. When I had recovered from forking out $177 for two adults and three kids to go in to Australia Zoo, we rushed straight into a frenzy of human-animal interaction. Now, let’s get this straight, I’m not a geek but I have got an MA in Design for Interactive Media, and, as a by product of that, a sad penchant for debating HCI or Human-Computer Interaction. Down at the zoo you can forget your computer mouse and have a much more rewarding time enjoying some quality Human-Animal Interaction. Think HCI (Human-Crocodile Interaction), HTI (Human-Tortoise Interaction), HKI (Human-Koala Interaction), HRI (Human-Roo Interaction), HSI (Human-Snake Interaction), HLI (Human-Lizard Interaction) and, my personal favourite, HEI (Human-Elephant Interaction).

In addition to all this there’s also a live animal show in the Crocoseum with an impressive display of birds and reptiles doing their stuff. We were lucky enough to see Terri herself take part in the show as they inaugurated their newest croc, Mungo. A large team was on hand in case it all went horribly wrong and sadly, despite my shooting lots of video in case of a disaster, everyone survived and Mungo was well-fed on some succulent chicken, not a zoo keeper’s thigh.

Crikey Mate and Fair Dinkum too

Fair dinkum to them all at Australia Zoo and to their grand mission of conservation through education. It’s all good, clean fun and worth the exorbitant entrance fee. Crikey mate, I’m already saving up for some HTI (Human Tiger Interaction) next time we go.