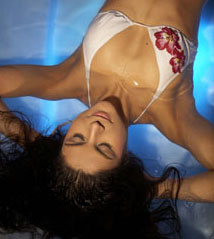 The Day I Lost My Spa Virginity

There are myriad ways to relax but I experienced something extraordinary on my first ever visit to a spa. I was studying at London University at the time and had been busting a gut to cram as much as possible into my head about French language and literature before my final exams.

My four years at university have been focused mainly on travelling or working in pubs, shops, restaurants to fund those travels. I wasn’t a bad student though, so I went to most of the lectures and seminars. I almost always handed in my assignments.

Plus I had an advantage because, while all the french students had spent a compulsory year in France, I’d scored a French boyfriend while I was there so, modesty aside my conversational french was superbe.

But there was a lot of reading and preparation required for the French literature exams which counted for 50% of the results.

So, as my university days came to an end, I spent a lot of time studying, taking notes and generally getting stressed out by the pressure to pass.

My best friend was in the same boat and we decided that the best way for us to succeed in our exams was to make sure we were fully relaxed before they started.

We’d read about this amazing new thing called a flotation tank. This was in the late eighties when flotation tanks were new and spa days in London weren’t as popular as they are now.

It was probably the only flotation tank in London at that time but unfortunately it was in Hampstead Heath which was about an hour and a half away from where we lived.

It was expensive to use the floatation tank too and, being students we didn’t have much money, but we decided to splash out so we made the long trek by bus and underground train to the spa in Hampstead Heath anyway.

Floatation tanks have changed a lot since but then. Some UK spa breaks may have beautiful floatation rooms looking out onto gardens with tanks big enough for several people. You can then choose to leave the windows open or close the shutters and enjoy the experience in the dark.

Other flotation tanks have ceilings dimly lit with miniature lights so you feel as if you’re relaxing under a starry night sky.

But this flotation tank was very small. It was like a shallow rectangular bath tub in a very small room, just a windowless cupboard really.

The idea with floatation tanks is that you lie in the pitch dark to cut yourself from all sensory experiences and external interruptions.

It’s thought that just one hour of floating is equal to four hours of deep sleep which I was much in need of and there were many other advertised benefits that anyone about to sit exams would benefit from such as:

All things we stressed out students were much in need of. 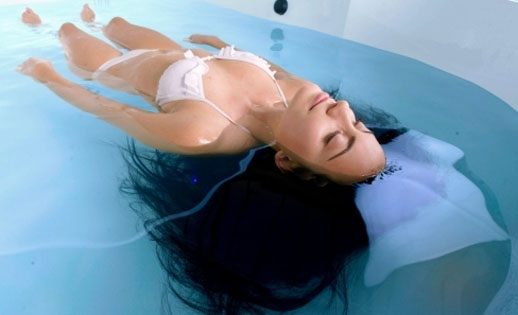 So we took it in turns to step into the lukewarm bath and float on top of the salty water. When I closed the door I was plunged into pitch darkness then, lying back gingerly, my body floated on top of the salt water as you do in the Dead Sea in Israel.

At first it was a strange experience. My body wasn’t used to floating so I kept starting like you do when you’re asleep and dream you’re falling.

The utter darkness and silence was a far cry from London life outside.

But soon I started to feel extremely relaxed and, although I didn’t fall asleep, I went into a strange altered body state. It was like one of those out of the body experiences you read about where I seemed to be floating above my body, watching it spin round and round in the flotation tank. Although that was impossible as the tank was a long rectangle which I couldn’t move around in much.

When the music came on to signal my hour was up I realised that time had been suspended too. I felt as if I’d only been in there for a few moments, not for an hour.

As my body floated the gravity and sensory free experience had rested my body and mind, letting me sink progressively into deeper and deeper relaxation which I was reluctant to leave.

When we left the spa we felt so relaxed we found it hard to walk but we stumbled down onto the underground train and back to our student digs.

Needless to say both me and my friend passed out final exams and graduated with honors that summer.

My first spa visit floated me away to new heights of relaxation and once I tried that it I just kept wanting more.

What’s your favourite way to relax at the spa, at home or while traveling?

I’ve never tried the flotation tanks. While I love the water, I’m also a bit claustrophobic so being “stuck” in a small dark space is not appealing to me. I used to go to a day spa for a combined relaxation massage/Reiki/Cranio-Sacral session and I’m sure I used to just float out of the room an hour and a half later.

That sounds lovely too :-)

Relaxation, comfort, ease, soothing… these are some of the amazing things that come from being at a spa — as for me, I get them… through different channels ;)

Well there are plenty of relaxation options around, we’re lucky :-)

Hi Annabel, I remember those tanks being around!! Blast from the past. Again we must have led parrallel lives. My pal and I joined a gym just to use the sauna whilst we were studying for exams. That’s when I learned that saunas are absolutely THE best place to have girly gossips.

Why we thought it would help improve our Latin and Greek translations escapes me now!!

I can’t wait for Monday and the flight to the Sunshine Coast. That’s my kind of relaxation. Looking forward to meeting you on Tuesday – hooray!

Wow, that sounds really creepy to me. You have guts. I love getting massage and other forms of bodywork. I learned Reiki – a Japanese method of hands on healing and relaxation – last month and my husband and wevhave been exchanging Reiki treatments every few nights. It’s divinely relaxing.

I love the opportunity to escape from the frenzy of life! I’ve not tried the bath experience yet, but I’d be game. My favorite spot at home is Loyly in Portland, Oregon, where I can relax in their spare, clean lounge in between sessions in the steam room, sauna, and cold plunge bath. So peaceful.

Previous post: How to See the Real Costa Rica