So Much To Do, So Little Time 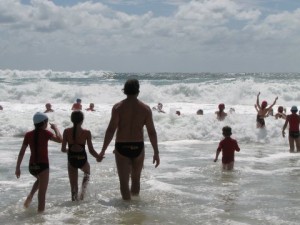 After some serious procrastination I am starting work only two and a half hours after getting home from dropping the kids off at school and childcare. Plenty of room for improvement there so that’s good.

Last week was a busy one for us former jungle and island dwellers. Last month I met a woman who’s recently moved here from Barnsley, London who said how quiet she finds it here on the Sunshine Coast of Australia. Personally, and I think I can speak for my whole family here, we find it quite frantic. There are people, cars, bikes and buses everywhere. Heck, they’ve got motorways, roundabouts and there’s even a set of traffic lights in between our house and the kid’s school. This is in sharp contrast to our last place or residence in Costa Rica. There I scoffed when the children did a project on road safety which included making a model of a traffic light out of an old milk box, speculating that many of the children may never have seen one before, the closest set being about 50 kilometers away. Still, I guess that’s why they had to make a model of one. But in all seriousness, I think here is just the right amount of busyness.

We are thoroughly enjoying all the amenities on offer including a cinema with heaps of new movies being screened and a library with free books, dvds and workshops for the kids. Best of all, a concept I find totally revolutionary for a library, and liberating for it’s users, especially me, there are no late fees! There is even a public swimming pool a few kilometers from our house with an Olympic size pool, another half Olympic sized one and a lovely kiddie pool with squirty jets and bubbles. I’m telling you we are really being spoilt here. There are clean, comfortable, regular buses, that I’ve never seen broken down, cruising by the bottom of our road and you can walk to Noosa National Park which isn’t to be sniffed at.

From our house you just head straight down to the white sand beach, turn left and twenty minutes later you’ll be sampling the delights of Noosa National Park. There’s a choice of tracks through the national park, either following the coastline with its sparkling blue seas, where you can often spot a turtle paddling around, or over the hill and through the shady bush where, if you’re lucky you’ll spot a koala and if not you’ll just end up with a crick in your neck from looking. Either way, when you come out on the other side of the park you can trot on down to Hastings Street or the main beach for refreshments to suit your taste and budget and some excellent people watching. Or, and if you don’t feel like walking then you can hop on a bike and go for miles, along rivers, beaches, mangroves and lakes. I told you we’re spoilt.

Anyway, what with all the excitement of starting school and swimming lessons, carrying on with the Nippers Surf Life Saving Club program three times a week, and cycling to school whenever possible some people have had a bit of a meltdown. Large, our first born, now aged ten is a lovely lad. Sensitive, studious and cerebral, he can also be quite emotional. So, after an apparently great week at school and excellent participation in his sporting activities he had a bit of a meltdown in the privacy of his own home on Saturday morning. Then his dad had a meltdown too, then I had a meltdown as well so we all ended up feeling thoroughly miserable.

Very disappointing on our first weekend back at school. I dream of having a lovely mellow time at home on the weekends, but it’s interesting that our children who normally get on pretty well, just snapped right into arguing with each other after school on Friday. I wonder if the cause is tiredness, stress, food-deprivation, attention-seeking or a combination of all of them. Anyway, I hope that our weekends aren’t all going to be like that.

Thankfully the day improved and we all had a great afternoon down at Noosa Spit where the deep, wide Noosa River ebbs out into the sea. This is a special spot with wonderful seabirds on the far shore, the calm of the river contrasting with the chop of the sea, the orderly paths perfect for cycling or walking in the otherwise natural beauty. Sometimes it can be really windy down here and the kite surfers come out in force speeding around the river mouth, swooping and vaulting like birds. But on Saturday it was perfectly calm and the low tide meant we could dive into the deep river then float along with the current for a few hundred meters before climbing out, running back to the starting point and doing it all over again. The kids loved that and also had a blast excavating tunnels into the sand walls the river had created and bashing them in again.

On Sunday morning we went along to Nippers with the organised chaos of about one hundred kids (or more) playing games, and doing running races in the sand and in the surf. The waves were too big for paddling or swimming, much to Luke’s relief. There are a few friendly faces down there who I hope to spend more time with and many other people I’ve not yet had a chance to talk to properly or at all. I suppose that this time next year we’ll be settling into a social network and a group of friends but at the moment there’s definitely a feeling of being an outsider for me and I hope the kids don’t feel that too.

I think it’s good that they’ve had their boundaries pushed and been thrown in at the deep end in Costa Rica, going to an unfamiliar country and a school where they speak very little Spanish. But there comes a time when you just need the comfort of the familiar around you and the feeling of truly belonging. I am ready for that now and I’m sure the kids are too.

Previous post: How to Move Overseas or Emmigrate to Australia, Costa Rica and New Zealand

Next post: The Financial and Emotional Cost of Moving to Australia with Kids