It’s only an hour from my home and the kind of place I imagined we’d visit all the time. But four years slipped before we made it there.

It’s brilliant to see dingoes roaming wild on Fraser Island but there are problems. The dingoes get a lot of bad press because they’ve bitten or even killed humans in the past. But all they’re doing is trying to feed themselves, protect their pups and survive in a place that is increasingly over run with humans.

Fraser Island’s a haven for fishermen and off-road 4WD fans who zoom up and down the beach constantly. That’s what we did too because there aren’t any roads.

So it is with travel: we humans go to see the natural beauty and enjoy the wildlife but we end up threatening it.

It’s one of the problems with travel but one I’m hoping can be solved if we travellers spend as much time learning about and caring for the places we visit as we do planning our trips.

I hope you get to see a dingo in the wild one day and if you do, remember that you are more of a threat to them than they to you. 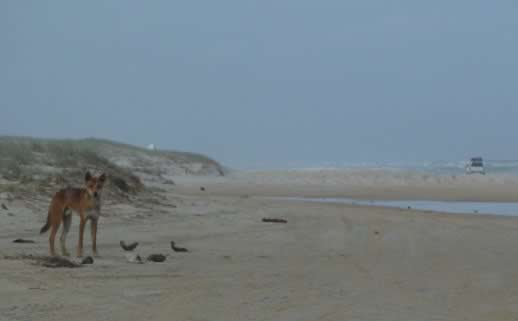 Would you like to see a wild dingo? Or maybe you already have? Was that on Fraser Island or somewhere else in Australia?