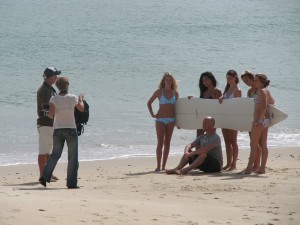 Some of the beautiful people, and Thomas Meyerhoffer, launching his radical longboard design

The people sitting on the beach must be hot, and ignorant of, or choosing to ignore, the dangers of the midday sun, whose ultra-violet rays are notoriously strong here in Australia. Under the shade of a pandanus tree, with its roots growing in a cone to support its trunk, it is cool, chilly even with the off-shore breeze.

Laguna Bay is spread in front of me, glittering as far as the eye can see, like a million tiny mirrors catching the sunlight. From the shoreline the white surf and gauzy green shallows darken gradually to deep velvety blue on the horizon. Noosa National Park is hidden around the leafy headland, but the white sands of the beaches and dunes of Cooloola National Park are clearly visible across the bay.

Sad then that this paradise on earth conceals many hidden dangers, and it’s not just the sun which is posing a serious health risk or only humans who are in peril. On land there is a mysterious insect infestation which is killing the iconic pandanus trees. At sea, an oil spill has blighted beaches only twenty kilometers from here, and along much to the coastline further south towards Brisbane, causing untold damage to plants and animals at sea and on land.

And the Good News…

But here in Noosa, the Festival of Surfing must go on and a good time is being had by all. The pro-women’s surf competition is underway and the only drawback visible to the naked eye are the waves, which are so small, it’s a wonder anyone can surf on them at all. Lucky that these people are professionals who can surf on any wave, big or small.

On Sunday pro-surfer, Julian Wilson, was surfing in the family competition with his dad. If the local press is to be believed, twenty year old Julian, is one of the best surfers in the world. Despite the obvious bias of the local press towards this Coolum surfer he has beaten Kelly Slater several times already so it may just be true.

Julian and I flew to Brisbane together from Los Angeles in November on a Qantas flight. It’s the best airline isn’t it? I love how they give you a snack pack before lights out so you can have your own personal midnight feast whenever you get peckish.

But I digress. I’d never heard of Julian Wilson before then, but like me, he prefers to roam the plane and loiter outside the toilets for hours at a time, while other people are sleeping soundly. His deep tan and woolen hat pulled down low over wild straw-like hair made a lasting impact on me and I had no trouble recognizing him a few weeks later when I read saw him featured in a magazine.

So you see, me and Julian go way back thanks to that fateful encounter on board a Qantas plane.

Fortunately for him and the other pros I have decided to stick to surfing at an amateur level this year. But I can’t help noticing that Julian looks much better in his board shorts, with no beanie and with wet hair.