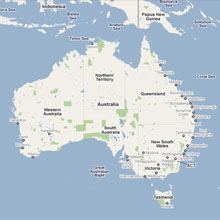 Last week I was also trying to sort out my grocery shopping.

Basically it has been taking up too much of my time since I moved to Australia and I need to get that sorted out.

Still, at least I don’t get lost on the way to the shops anymore. But when I do get there it still takes me ages as I don’t know where anything is and I have to read every single price and label before I hit the right combination of cost and nutritional value.

As well as taking so long, it always costs too much. But there’s not much you can do about that when you’ve got five hungry mouths to feed, and a serious chocolate addiction to support.

Anyway, we seemed to be heading off to the supermarket every other day, so in a bid to get that under control I decided to take advantage of our local supermarket’s kind offer of free delivery on all Internet orders. This is something I’ve been wanting to try for ages but haven’t been able to as the service just wasn’t available where we lived in New Zealand and Costa Rica.

Shopping online didn’t actually save me any time, although it could well do in the future if I make it a regular event. I think you’re supposed to set up internet shopping lists so that your regular items and favorite buys are automatically loaded into the ‘trolley’.

Okay, I admit, shopping online took me well over an hour. But that’s no longer than it would have taken me to drive to the shop, drag my trolley up and down every single aisle, load in the groceries, queue to pay, then stuff it all in my car.

The only down side of shopping from home is that it didn’t give me a chance to catch up on my Hollywood friends by having a sly read of the gossip rags while I wait at the checkout.

Food delivered to my door by a charming man

After a good sixty minutes on the supermarket website, I finally placed my order, and organized to pay by mobile eftpos.

I was delighted when a large refrigerated van turned up outside my house at 9am on Saturday morning.

A charming young man then proceeded to unload everything I would need to feed the family over the weekend and the kids even got involved and helped schlep it into the kitchen.

I immediately noticed that I had been sent me long life milk, not fresh, but the delivery man assured me I could just call the customer service people and they’d refund me, then he would take away the unwanted stuff next time I ordered. Not really a big deal that one, and apparently if I did run out of milk I could use the UHT stuff and still not have to pay for it.

So far so good.

What worried me though, was the amount of salami sticks I unpacked.

Instead of the eight mini salami sticks I had ordered for the kids’ lunchboxes I had been sent about 80 of them. There were enough salami sticks to feed half of Frankfurt.

When I checked my receipt I saw I’d been charged (and paid) about $80 for them.

Ooops. I pictured the wrath of my husband as he shook his head and reminded me how he told me it was a waste of time shopping online. I planned the conversation with the customer service people and decided the best tactic was just to admit my stupid error in over ordering, plead for forgiveness and beg to be able to return the 72 unwanted salami sticks.

So that’s what I did, but they were real sticklers there at customer service, and quite adamant that it was a fault on their website, and not my error at all.

In view of this they promised to refund me the full amount for the preserved sausages and let me keep them too. So that’s how I come to have a six month supply of salami sticks in my freezer.

Quite a bonus and the only problem is my freezer’s not really big enough so now I need to buy a new one.

All in all the online shopping was quite a success and I decided to do it again the week after.

I had to laugh though, when I logged onto the supermarket website, revisited my previous order and saw that they are right out of stock on salami sticks.

Postscript: The kids have announced they no longer like salami sticks.

Hi,
My girlfriend is a tico and I thought it might be nice for her to catch up with some of her fellow travelers. We are based in Sydney and if u would like to catch up with a coffee at some stage I think she would love it?
Regards
Benjamin

Hi Benjamin, I’d love to. Let me know if you are ever near the Sunshine Coast. I don’t go to Sydney much!

Previous post: Migrating to and Networking in a Foreign Country

Next post: New to Noosa and enjoying all it has to offer