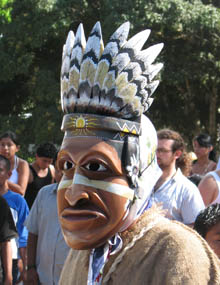 Is it So Wrong to ‘Go Native’?

The term ‘gone native’ tends to be used in a negative way by travelers or expats to explain what they see as strange or embarrassing behaviour by another traveller or expat.

You’ll meet many types of traveler when you hit the road but the traveler who’s ‘gone native’ is the person wearing local garb, eating from street stalls and hanging out with locals all the time. Maybe they’re even hedonic refugees who’ve traveled somewhere and decided not to go home. Ever.

Maybe (shock, horror!) they’ve even married a local, practically forgotten how to speak their own language and don’t seem to want to hang around in touristy areas.

In his book The Geography of Bliss, Eric Weiner defines the expression going native as:

“the term used to describe foreign correspondents, diplomats and other expatriates who fall in love with a place so fully they cross the line between what anthropologists call a “participant-observer” and become simply a participant. They speak the local language, get the local humour. They wear the local dress. In some cases they develop immunities to local microbes.”
The Geography of Bliss, Eric Weiner (p. 252)

I’ve gone native many a time. It’s not a choice you make, it just happens when you travel overseas and stay somewhere for a long time. Although I’d never really fit in with the locals in some of the places I’ve lived such as Zimbabwe, Laos or even the relatively westernised Costa Rica, I’ve certainly tried.

A few years ago I wrote about going native saying:

“I’ve committed this travel faux pas many times wearing a traditional sinh (woven silk skirt) in Laos most days when I was working there… That wasn’t an isolated incident either – check out the photo me in local Indian garb in Why do People Love to Travel?“

Not that the local women dressed anything like I did.

But why do we have to feel guilty about ‘going native’? Isn’t it a good thing? Something we travelers should aspire to.

I urge you to travel far and wide, to eat local food and adopt local customs and traditions. Heck, if it’s comfy and climate-friendly go for it, wear the local garb for all I care.

On many occasions I haven’t just lived like a local I’ve lived with locals.

Many times, although I knew that I wasn’t destined to live in those countries forever, I learned to live with other peoples’ customs and respect them, even if I didn’t accept them personally.

I learned to get used to being different because we are all unique.

I learned that, although we’re all different, we all want the same things in life and we all deserve to be healthy, happy and loved. 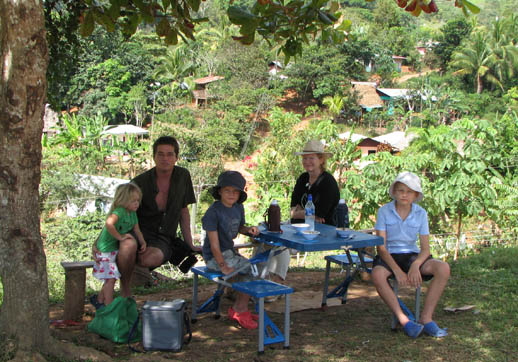 I wouldn’t say we’d gone native here but this photo of my family and a friend and the one up top were taken in a Boruca village in Southern Costa Rica during the Fiesta de los Diablitos which is held each year from December 31 to January 2. 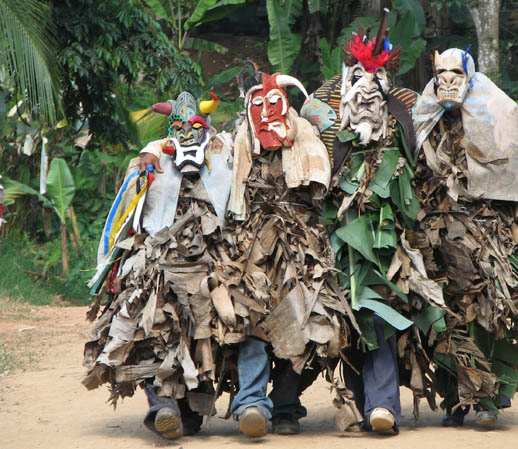 Many of our expat friends refuse to go to the three day event calling it the “drunken Indian festival”. While there were many indigenous Borucan men there who were partying hard (well it is New Year’s Eve) it was an amazing opportunity to meet Borucan people, visit a real Costa Rican village and take part in a festival which dates back to the Spanish conquest. You see those wooden masks in tourist shops all over Costa Rica but few tourists or expats have even seem them actually being used in a truly local festival.

‘Gone native’ is often said with a sneer and an eye roll. It holds so many negative connotations but it really should be positive term.

Experiment, have fun and go native on your travels if you feel like it. I won’t mind. After all, when in Rome…

What do you think? Is it bad to go native or a good thing?

I’ve never used the term “go native”, but I have used the term, “gone local”. I lived in Kyrgyzstan for a period of time, albeit short (5 months), but when a table of Kyrgyz people look at your table and say they want what you’re having… yep, you’ve gone local! ;) That said, I’m horrible at it in most places. I LOVE off-beat destinations and remote places, but when I get there, I’m like, Oh CRAP where’s the toilet…. the sanitation…. the comfort. haha. But still I go.

Those mascots really look scary! So the “gone native” is term used when they do not like what they see. I had this experience in one airport in Asia where the flight delay took more than 5 hours. Can I call the experience “gone native”?

They are a bit scary! But the atmosphere was fun and friendly:) Not sure if you went native there or not… it depends how you handled the experience:)

I’m all in on going native! I think its the only way to truly experience a culture.
I definitely went native when living in Brazil for a year and again in Mexico and at various other times in my travelling life. I remember giving ‘dry run’ instructions to a friend on how to use a squat toilet before she went to the middle east. The more you embrace the different and all out bazaar the fuller your life will become.
The best part is when you tell your local friends your coming back to visit and you hear “Ah, she’s coming home!” in reply, that makes my heart flutter :o)

That is SO beautiful:) You sound like a great traveler.

This is a great post and a thought-provoking question. The phrase “gone native” was historically intended to be a pejorative observation–probably to get wayward diplomats or others associated with trading or, ahem, “maintaining” a colony back in line . I would imagine that most 18th and 19th century Europeans would have considered those who had “gone native” to be a type of cultural traitor. Given the attitudinal baggage that goes with the term “going native”, I prefer the term “going local”.

To me, it makes sense that if you’re going to be living in another culture that’s quite different from your own for any extended period life will probably unfold more smoothly if you adapt to the culture. Having said that, while it’s probably fine to swap western attire for local attire and great to be open to trying new foods and experiences, I think it’s also important to be respectful of the host culture’s customs and make sure you’re not inappropriately appropriating aspects of the host culture’s customs. (Sorry about all the alliteration!)

I love the alliteration and everything you added, thank you so much:)

I think ‘going native’ terminology is incorrectly used when it describes a traveller’s ability/desire to respect, fit in with and fully experience another culture. That’s just part of responsible travel, isn’t it?? I don’t think the term applies unless you completely adopt another culture by casting aside your own. How can you ‘go native’ if you’ve still got the option of ‘going home’?!

Strange: people come to the UK from all over the world. If they do not ‘go local/native’ (bowler hats and brollies? pearls and twin sets?), they are charged with living in ghettoes. Why should not the same rules apply vice versa? I have never travelled further east than Greece, west than Andalucia, north than Stornoway; but (whether as a private traveller, or professionally as a tour-guide/EFL teacher) have always at least spoken the local language to my best ability, and blended in/made friends with locals. This in particular in Catalonia, with two groups of close friends there. End of my one-year stay, one group invited to spend a (very hot) day by a pool. Sunburn. They lavished cream on my bright red back and face. Next day, watching the evening ‘paseo’ with one of the other group, I thought he was unusually quiet. Eventually I asked what was wrong. ‘Your face is red,’ he replied. ‘It’s sunburn!’ I protested. ‘Si’ he responded,’ and now you look like a FOREIGNER (pareces a un extranjero)…!’ I didn’t know whether to feel embarrassed; or honoured at the implication of the situation beforehand, i.e. that he had accepted me as a local.

Next post: What’s the Scariest Thing You’ve Ever Done?