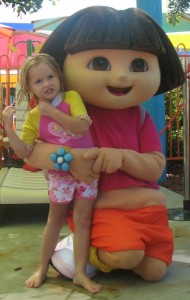 Learning to be like an Aussie and Speak Aussie

Last Saturday we went to the Gold Coast on a bus trip with our local Surf Life Saving Club to celebrate the end of the Nippers season, where children are schooled in the fine art of surf life saving. This was the final bash to reward the kids for all their hard and fast running, paddling and swimming over the season.

For someone like me, who doesn’t like bus trips, this was a brave move. Travel by bus makes plane travel, with it’s opportunities for walking round people watching and star spotting, seem positively enviable.

Yes, five hours on a bus was a brave, some may say foolhardy move. Still, I have to say it all went well and was worth the trip.

We spent the day at White Water World, a fantastic aquatic adventure park. The only hiccup was that my kids didn’t want to go on any of the rides.

I have to take some of the blame here. I have raised them on a small island in New Zealand and in the jungles of Costa Rica where the only adrenalin rushes are provided by nature. So a vast theme park with thousands of people running around squealing may have freaked them out a bit.

We went straight to the Temple of Huey where there were some short tubes for people to whizz down in inflatable rings. It looked like great fun and all the other pleasure-seekers had smiles plastered on their faces.

Not my four year old though. She screamed, she yelled, she cried, she clung to the edge of the tube and refused to let go. The helpers and I cajoled, pleaded, ordered and finally prised her fingers away and pushed her off into the tunnel.

“Again, again.” She cried when we got to the bottom. Phew!

Meanwhile Max, aged seven was having the same problem and weeping inconsolably at the top of the ride, so I had to go through the same scenario all over again with the same predictable end result. Sometimes you really do have to be cruel to be kind.

Surely Luke, aged ten was having a blast, I thought. But no, he was skulking around at the bottom and refused to even climb the steps to the top of the ride.

This time the usual cajoling, persuasion and ordering failed and sadly, I had to resort to bribery. Yes, I am sorry to have to say that I had to pay my son a dollar to go on the ride.

Learning the Lingo: How to Talk like an Australian and understand Australian expressions

Anyway, after all that nervous excitement, we really did have fun and spent six hours wooshing down slides and around bends.

On the way home we stopped at ‘Maccas’ just as one of the other mums had told me we would.

“McDonalds.” She said, without even rolling her eyes.

Our kids, who have been deprived of such things for a few years were delighted to be reunited with the ‘happy’ meal, especially Kiara who was over the moon with her Hello Kitty watch. Combined with an unexpected meeting with Dora the Explorer on the Gold Coast things can’t get much better than this when you’re four.

There are so many examples I’d like to compile a list of them. But wait, the thoughtful people at Koalanet have already done it for me, so if you want to learn to talk like an Aussie and be in the know if you come across a bogan, a hoon or a jillaroo try Koalanet.

Good Luck with all your travel plans! Annabel