I don’t fully understand the situation in Gaza so I won’t pretend to.

I’m scared of even mentioning the grief in Gaza and being dragged down in a quagmire of controversy, hatred and finger pointing about who started it all.

I’m worried that I’ll upset you by mentioning negative events like conflict, terrorism or war.

But I do understand that we can’t create positive change in the world if we aren’t willing to talk about these common negative occurrences.

I understand that we can’t allow the fear of reprisal and misinterpretation to stop us from talking about issues that affect us deeply.

I understand that the need to agitate and speak out against injustice burns inside me and that with every day of silence another small piece of me dies.

I also understand that:

2. The average age of Gaza residents is 17 years old.

3. Innocent children of Gaza are suffering from over-crowding, hunger, lack of education and emotional problems caused by living in a conflict zone.

4. Many children in Gaza been injured or died during bombardment. It’s been just over a month since the first missiles were launched and the death toll now stands at over 1800, including more than 1000 civilians and 350 children who have died.

5. These attacks have also destroyed UN built schools and World Vision created safe spaces for children. You can read more about World Vision’s work in Children bear the brunt of conflict in Gaza.

No matter how powerless we feel we can make a difference by speaking out about the unspeakable.

In the case of Gaza you can speak out by advocating for a ceasefire between Israel and Gaza using the hashtag #ceasefire4Gaza on Twitter, Facebook or your favorite social media hangout.

Or by donating money to help the affected children and families in Gaza through World Vision here.

I’ll never know the grief that the people of Gaza are enduring but I can’t do nothing to help them any more. Speaking out brings some small relief. 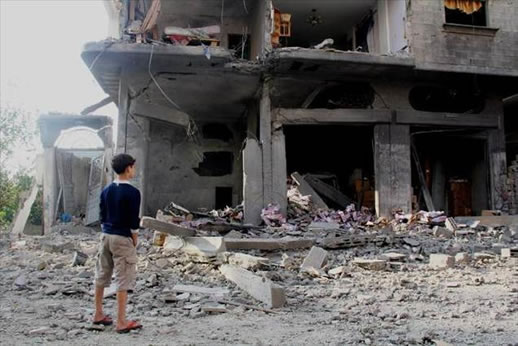 If you’d like to help people in Gaza, World Vision is currently dedicating funds donated to their Disaster Ready fund to this emergency. You can help bring relief by calling 13 32 40 now or visiting www.worldvision.com.au/emergencyprepare.

Even a small donation helps bring relief. Thank you.

Want to be more adventurous?

Get free inspiration from Get In the Hot Spot – a travel blog for women aged 40+ who want to enjoy new adventures, have more fun and feel fabulous.

Hi Annabel, I really don’t understand this either… but I do believe in humanitarian relief and assistance and that’s what World Vision does and that’s what all of us, any of us can do. I’m thinking I need to read some books to understand this terrible tragedy that’s occurring… amidst many others. Maybe I don’t though maybe it’s best just to send some money and try to live a conflict-free life myself, as best I can.

I like the sound of a conflict free life. Definitely something for us all to work towards. Although thinking about it there will probably always be conflicts – we just need to learn to handle them without violence! I’m always telling the kids – use your words!!

Previous post: Is this the Best Bread in Noosa?