I love exercise but I hate sweating or getting out of breath which makes it tricky. Still I force myself to do that once a week because I know it’s good for me and because I do get a buzz from aerobic exercise after the fact.

So I’ll never be a gym junkie, team sports terrify me and suffice to say that, despite repeated attempts at jogging, the idea and experience of it is about as appealing as going for a mammogram.

Despite this my fit friend Tess agreed to accompany me on a jog when I told her of my quest to do 52 exercises this year.

Of course jogging is one thing I could do alone but it’s essential for me to go jogging with someone else because otherwise, as soon as the going gets tough (usually after five minutes or so), I will stop jogging and revert to a lovely power walk which is my favourite exercise in the whole wide world.

I am also hoping that jogging with a friend will make it more fun. Here’s a blow by blow account of my jogging experience:

0-2 minutes – The weather is vile. It’s raining steadily and there’s a strong breeze blowing in from the sea but it’s still warm. We set off from Tess’s house and start jogging straight away with NO warm up. I had been hoping we could mess around and walk for a bit first but Tess’s a no nonsense woman and we get right into it.

2-4 minutes – A hill. I valiantly jog on keeping an eye on my heart rate monitor which shows I’m already getting a good aerobic workout. But alas I soon have to start walking and can no longer talk.

5-12 minutes – Once we get to the top of the hill it’s pretty much downhill to the beach so I can run all the way but I make sure I take the shortest route hugging the inside curve on bends. Conversation resumes and we discuss teenage piercing and tattooing both of which we are strongly against. Even though Tess has a tiny tat on her back.

13-18 minutes – It’s heavy going on the sand, even though it’s not deep dry sand there’s still some give to it and the wind is fierce.

“Sorry I can’t run any more,” I gasp and start walking again. But fast.

18-23 minutes – Once we get off the beach I feel better knowing we’re on the homeward slog. I spot a short flight of stairs and dash up it as an added extra to impress Tess. My heart rate peaks at 174 bpm and I don’t think Tess is at all impressed.

24-35 mins – There are a few more minute hills to tackle and I try to persuade Tess to take a shortcut back but she won’t. My face is burning and I’m sure it’s an unsightly mottled red. I’m looking forward to the cool down which I’m hoping will be a nice walk and some stretching, always my favourite part of any exercise regime because I love standing still and am naturally bendy.

35-40 minutes – Being a jogging regular Tess confesses she never cools down, just heads straight in for a shower. But she gallantly comes for a walk up and down her street with me until my heart rate is back below 120 bpm, then we do a few leg stretches on her driveway which is bliss.

I am soaked through and glad it’s raining as the sweat could easily be mistaken for a rain soaking. Tess looks annoyingly perky and talks about how she’d like to do a 10 km fun run. The very concept of a fun run is a mystery me. It’s the ultimate oxymoron because I can’t believe anyone could run anywhere for fun. Especially not 10km.

I like Tess. I wouldn’t even mind going running with her again and I know for me to jog weekly if she could put up with my bad attitude and complaints. But her sense of distance is terrible. I’m sure we ran at least 7km. It felt like it anyway.

Update: Despite the extreme exhaustion and supreme pride I felt after going jogging when I used the Movescount site to see how long our jog was I discovered it was only 4.15 km (2.5 miles). I am very disappointed. 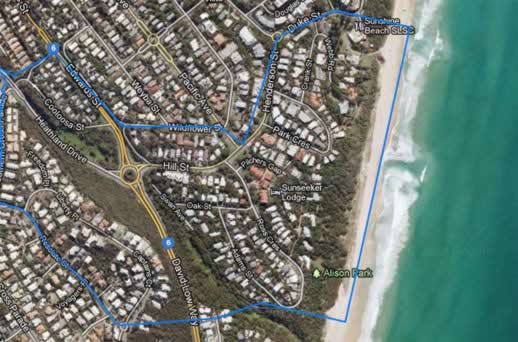 Our jogging route – it felt much longer than it actually was.

Cost: $0 – this must be the only good thing about jogging

Average Heart Rate: My heart rate was above 12o bpm for 32 minutes with an average of 147 bpm.

Peak Heart Rate: 182 bpm which surely must be dangerous.

Fun Factor: 4/10 – Even with a friend to distract me jogging sucks.

Fear Factor: o/10 – I’m not scared of jogging so fear isn’t a factor but dread it. The dread factor before hand would be 8/10.

Post-exercise Glow: 8/10 – So happy it’s over. I even had enough energy to attack an overgrown bush when I got home and whip it into shape. I feel like if I can jog, even if it’s only 4 km them I can do anything. Almost.

Are you a jogger or do you prefer a more sedate pace?

Click here for more episodes in the 52 Exercise quest.