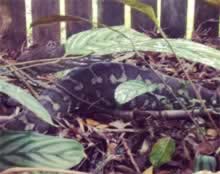 52 Exercises: #10 Cage Fitness (and a Python Ate Our Guinea Pig)

When you talk about moving to Australia some people shudder.

“Ugh! I could never live there because of all the snakes,” they say.

I moved here despite the snakes. I’ve got a healthy fear of snakes but rationally I know they’re not likely to harm me. Here’s how you get on with life and the snakes in Australia:

As a nature lover I know seeing a snake is a rare privilege and I’ve spotted four of them in the four years I’ve live in Australia including a baby and a deadly black snake. We take photos of them and send them to a snake lover on the Internet who identifies them for us.

But four years later my fear of snakes is still there. Hang out with a few Aussies on Twitter or Facebook then mention snakes and it won’t be long before they start sharing their close encounters of the reptilian kind. Some Aussies even find it funny when a snake gets in their house like this tweeter:

Snakes like to curl up in warm dry places, often found in garages, the laundry and even car engines. I’m always watching for snakes. When I go into the garage or laundry I’m looking round for them. When we go for a walk we’re ever vigilant.

At Australia Zoo I was brave and even managed to touch a snake. The notice on the carpet python tank claimed there’s one living in the roof of every Queensland home, that carpet pythons are quite harmless and help us by eating rats and mice.

That’s little comfort and I don’t rest easy in my bed if I think about how there may be a large snake curled up somewhere over my head. 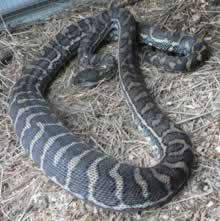 It’s not just wild rodents carpet pythons eat either. Pets make an easy feast so when I finally gave in and let my kids have guinea pigs I knew they pythons would come hunting.

For a hot, dry country it’s been pouring with rain for weeks now and snakes love the hot, steamy weather that comes after the rain.

Then on Friday afternoon we noticed one of our guinea pigs had vanished. My daughter was frantic wondering where her dear piggy Chocolate could be. The Mucho Man went to the pub leaving me with instructions to:

“Poke around in the leaves with a stick. He’s probably hiding in the undergrowth somewhere.”

So I did and something was hiding.

I poked around the fence-line and trees cautiously until I got to the back corner. Raising my stick for a final poke I spotted a carpet python, screamed “Arrrrgh! Snake!”, dropped the stick and ran into the house.

The snake was lying in a most unsnake-like way, in a perfectly straight line. His seven foot body stretched out in the middle by a guinea pig shaped lump. His tongue flicked in and out and his beady eye fixed on me warily.

I wish I hadn’t screamed, shouted and run away but you can’t deny that primal fight or flight instinct. Then my daughter was sobbing hysterically while I tried to slow my breathing and calm her down. 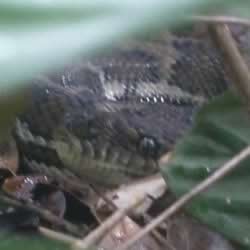 I hated myself for going back to take photos but did it anyway. Eventually we went to look for tadpoles which have spawned in nearby flood water and I left a note on the Mucho Man’s keyboard.

“There’s a seven foot carpet python in the back garden near the fence on the right with a big bulge in its tummy. Chocolate has vanished.”

But when the Mucho Man got back the snake had gone. I can’t see it in the bushes, in the garage or under the house but I’m sure it’s there somewhere. Digesting one guinea pig and hanging around our garden until it gets hungry again and can eat the next one.

I head off to Cage Fitness on an empty stomach. From what I can understand it’s based around the mixed martial art of cage fighting and includes five slots of five minute workouts targeting different areas of the body plus five minutes stretching.

New research has shown that some people could only need three minutes of high intensity exercise a week so even though a Cage Fitness class only lasts 30 minutes that could be enough for my weekly exercise hit.

There are 14 women, divided evenly between fit young teens and not so fit middle-aged women, and one young man who shows off by leaping around kicking things for no apparent reason.

We each grab a heavy Cage Fitness punch bag and proceed to jump over it, do push ups on it and pummel it. I like straddling it and pummelling it best. The heavy swollen girth reminds me of the snake and this time I fight it.

Cage Fitness seems to be a humourlessness business but maybe its my mood. It’s definitely intense and a few people flash me encouraging smiles.

I go home red-faced and think about the guinea pig being squeezed to death, about the snake dislocating its jaw so it could swallow Chocolate whole and how sick the snake must feel now. I wonder if it’s true that the snake was as afraid or me as I am of it.

Cage Fitness is to exercise what eating is to a carpet python. It’s not fun but you get in there, get it done and get out of there as fast as you can.

Do you love exercise or do you just do it because you know it’s good for you? Is cage fitness for you? 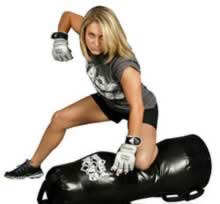 Cost: $0 – I got a free trial at the Budokan Karate center in Noosa but after that it’s $10 per class with a small discount if you buy a block of ten or more. You classes near you at the Cage Fitness site but don’t try it unless you’re quite fit already. I’m still aching three days later.

If you’re enjoying Get In the Hot Spot and 52 Exercises please take a moment to share this post on Facebook, Twitter, by email or any way you please. You can use the handy buttons below. I really appreciate that. Thank you.

Get the weekly newsletter – If you’d like email updates from Get In the Hot Spot click here to subscribe now. You won’t get an email every time I update the blog but I’ll email you weekly with the best stories.

Right, that’s it, no guinea pigs for us. I had them as a girl and can’t bear the thought of them being swallowed by a python. We do get them in our garden and slithering across the road occasionally. Have always felt fairly warm towards them but no longer. Guinea pig murderers!!

I don’t think I fancy cage fighting, but good to know it exists and it’s intense. I’ve heard that research saying we only need a little exercise if it’s tough enough. I bet it depends on your body type/genes etc But I like exercise for the mental calm… well, it tries.

I’m sorry to hear about Chocolate the Guinea Pig and its untimely demise thanks to a seven foot long snake. Eek! I used to be terrified of snakes, and as far as I know, we don’t even have any deadly snakes in North Vancouver–just harmless little Garter snakes. I had to get over my fear of snakes thanks to a cat that I had many years ago. My cat used to catch the snakes, bring them into the house and play with them. I always seemed to end up with the job of rescuing whichever snake she brought home to play with and escorting it back outdoors. I couldn’t bring myself to pick the snake up (I was scared it might turn around and bite me.), so I’d manage to scoop the snake into an old saucepan then run out and tip the snake out at the far edge of the garden that backed onto a forest. I felt sorry for the poor little snakes and I got over the worst of my fear of snakes, but I still have a very healthy respect for them.

I’m not sure cage fighting would be quite my cup of tea, but it sounds as though it might be a good outlet for burning off stress or frustrations. Good for you for trying out different exercises and activities. Not sure what to suggest for the mid-life crisis. I’m still trying to figure that one out for myself. =:-

Oh this is sad, funny, curious and clever all at once. For a start ‘cage fitness’ I must have read in my head as ‘cage fighting’ because I imagined it must entail dressing up badass wrestling style and fighting in a cage!! I thought it sounded pretty damn radical… Then I go to your post and see a pic of a python so then I thought maybe it’s fighting in a cage with snakes!! And then I read on to find out what it really is and your lovely, sad missing guinea pig story. It’s sad when pets die. :(

Next post: 17 Recommended Reads to Make a Boring Trip Fly By